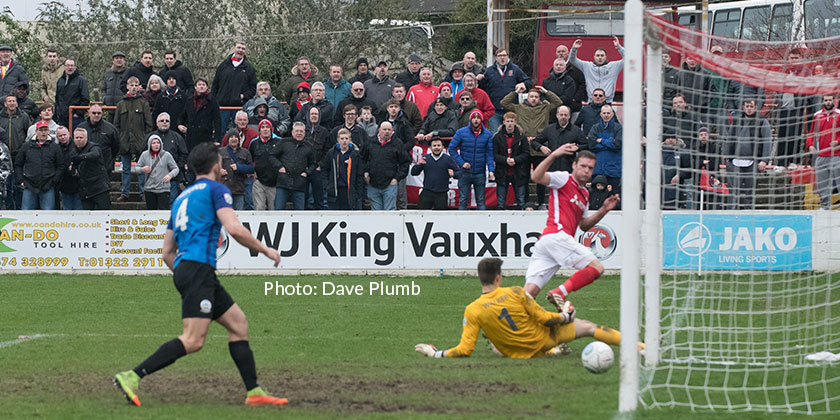 Fleet fans have waited 40 years to record a league win over Dover Athletic on home soil and having seen an equaliser hit the back of the net in time added on, they might have been forgiven for feeling the weight of those decades. But with seconds left on the clock, Andy Drury popped up at the far post to fire home a free-kick from Myles Weston and the Kuflink Stadium found its voice once more. Top of the form table at full-time, the precious win keeps Fleet in the hunt for a top seven place and keeps the race for the final play-off places going well into the last month of the season.

Daryl McMahon went with an attacking line-up, bringing in Sean Shields for Jack Powell, which saw him, Luke Coulson and Corey Whitely all on hand to offer support behind Danny Kedwell. Both full-back positions also saw a switch, Jack Connors and Lawrie Wilson making way for Chris Bush and Marvin McCoy.

For a local derby, the opening exchanges were tame though Corey Whitely’s turn and shot saw an effort hooked wide as Dover’s defence stood off inside the box. The visitors didn’t get a shot in until the 16th minute when Mitch Pinnock’s long throw stretched the Fleet defence and the ball eventually fell for Mitch Brundle whose daisy cutter rolled into Nathan Ashmore’s hands from 10 yards out.

From the 20-minute mark, Fleet began to play the better football and passed it around well in midfield. Shields took a while to see much of the ball but on 22 minutes he was on the end of a fantastic piece of play from Andy Drury, twisting away from Connor Essam before his shot was well turned away and against the foot of the post by Mitch Walker.

Ade Azeez might have done better with Pinnock’s deep cross moments later at the other end but though he climbed well at the far post, he directed a header over from a good position. A cross from a similar wide position by Femi Ilesanmi on 33 minutes skidded along the Fleet box and though two Dover players stretched for it, they couldn’t get a touch.

In between those chances, Fleet had two of their own. Ashmore’s quick thinking goal kick upfield was controlled by Luke Coulson and his pace carried him in between Dover’s central defenders but Ilesanmi managed to close him down in time. Four minutes later, Shields whipped in a great mid-height cross and Kedwell’s glancing header looked goalbound before Walker made a superb save to tip it away.

Kenny Clark and Dave Winfield both went for a right-wing cross that rather put both of them off their headers before Drury surged through the middle, eventually creating an opening for Whitely. Though he connected well with his shot, it was driven just wide. Fleet might have felt they’d done enough to sneak ahead by the break but with Dover’s defence one of the most miserly in the National League, the home side couldn’t quite unlock them in that opening 45. 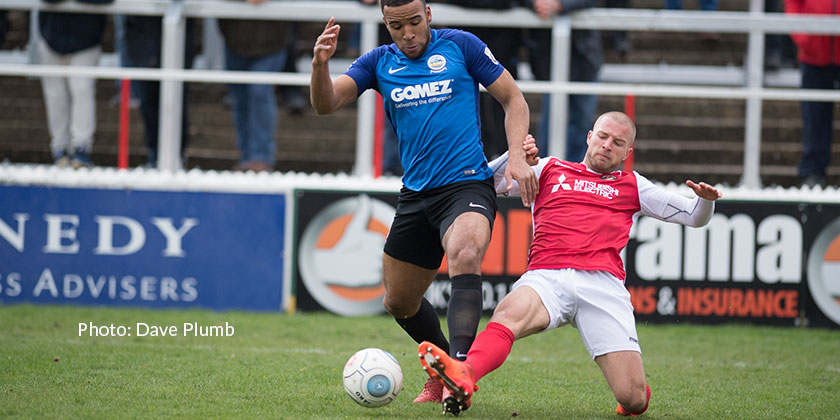 Like the first half, the second began with little to hint at the drama to come. It took 10 minutes for an opening and the home side grabbed it. A Fleet corner was overhit beyond the box but Shields collected it, turned Azeez inside the box and fired a low shot through a crowd that beat Walker at his near post.

Dover made a double change on the hour mark as they attempted to mount a comeback and before long Keanu Marsh-Brown was also sent into the fray. Although Dover enjoyed a little more possession, Fleet continued on the front foot as best they could. Frustrations threatened to get the better of a few players as Ilesanmi and Clark both saw yellow and Liam Bellamy needed more than one talking-to on his return to his former home ground. Drury also earned the referee’s ire with a pulling back of Anthony Jeffrey that was worthy of another yellow.

Shields attempted to tee up his second of the game on 77 minutes, attacking through the middle and seeing a firm low drive almost squirm under Walker’s body. Six minutes after that came Dover’s best chance when Marsh-Brown found skipper Mitch Brundle poised in the middle of the park and his rising shot crashed off Ashmore’s crossbar.

With five minutes of added time played, Fleet looked to have done enough until substitute Myles Weston came off second best down the left and as a cross flew in at pace, a Bush challenge saw Giancarlo Gallifuoco lifted off his feet, though Fleet protested the subsequent penalty award. Marsh-Brown fired it to Ashmore’s left and Dover celebrated their late, late equaliser.

McMahon roared his men forward as home fans were left cursing a late goal. With their next attack, Fleet won a free-kick and Weston swung a curling ball into the middle of the Dover penalty area, Clark might have got a touch but either way it fell nicely at the feet of Drury and he kept his head to fire home the winner and his fifth league goal of the season to delight the home faithful.

Ed Miller has been Ebbsfleet United's communications manager and programme editor since 2014 and responsible for the club website since 2007. Contact him on ed.miller@eufc.co.uk
PrevPreviousWelcome to Esquire Developments, our new Community Sponsor
NextDrury keeps a level head in crazy finaleNext