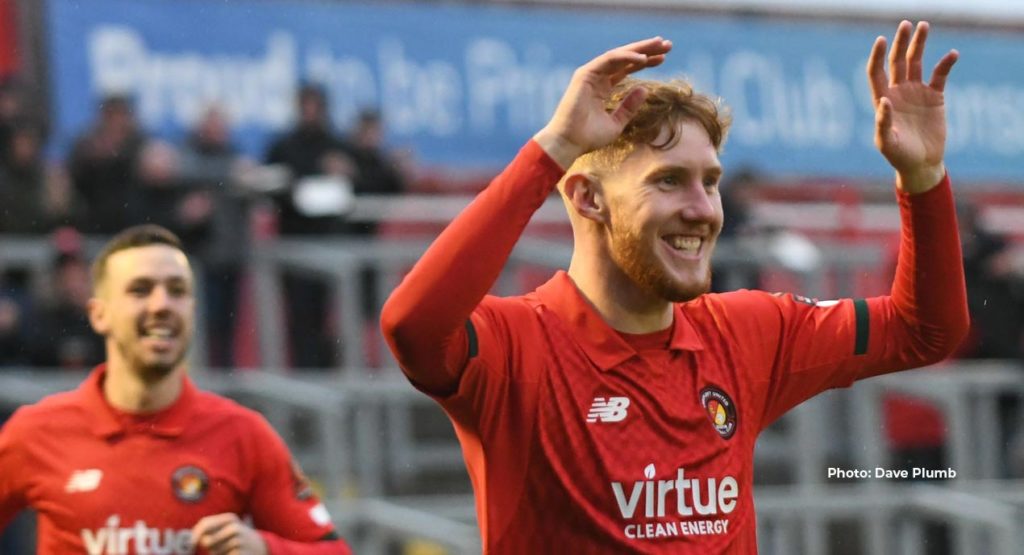 The Fleet got back to winning ways this afternoon as Greg Cundle’s late winner against his old club sent supporters in the Kuflink Stadium home happy with another crucial three points.

Alfie Egan had set the ship on course with an early goal but with Concord fighting back just before the half-hour, it seemed their defensive discipline would frustrate the Fleet for the whole 90 minutes.

Dennis Kutrieb made three changes to his side, with Chris Solly, Christian N’Guessan and Greg Cundle starting in place of the suspended Tobi Adebayo-Rowling, Jack Paxman and Dominic Poleon.

Fleet looked to get into their stride early when Cundle’s run found Bingham and he squared a pass to Egan whose effort was blocked from 18 yards.

But Egan wasn’t kept waiting for much longer as Fleet took the lead on six minutes. This time it was Craig Tanner providing the assistance, playing a pass across the box for Egan to pick his spot with another of his clean, incisive strikes.

Concord goalkeeper Myles Roberts saved an effort from Cundle as the wide man advanced down the flanks and in-field before firing on target. But the visitors were in the hunt from time to time with Lamar Reynolds showing pace to get into the box on a number of occasions. On 13 minutes, top scorer Danny Green might have done better than lift his shot from a good central position over the bar after Concord had attacked down the Fleet right.

There were a couple of early yellow cards for either side, N’Guessan seeing yellow for one foul but his midfield partner Egan was buzzing around the final third looking to create another opening. He eyed a second goal on 18 minutes as he marauded down the Concord left flank and with Roberts out of his goal and stranded, it was left to his defence to mop up.

At the other end, Haigh had to be alert against his old club, getting behind James Blanchfield’s on-target strike on 19 minutes. But he was powerless to prevent Concord getting a foothold back in the game eight minutes later. A cross from the right after some slick one-touch passing ran under N’Guessan’s boot and no Fleet defender could get there to clear before Cambridge United loanee Lewis Simper was able to find a spot to aim for and it was 1-1.

For a short period, Concord had their tails up and looked to exploit Fleet’s disapointment. Reynolds embarked on another run that Sido Jombati forced wide. Fleet recovered with Tanner sliding a pass into Cundle in the box. The Fleet man slipped, as did his marker, before Cundle righted himself to attempt a shot on goal but Concord cleared.

Sefa Kahraman then headed Tanner’s inswinging corner over as the half ended all square.

Kutrieb called all his subs in at half-time and waited only three minutes to introduce Adam Mekki. It took Fleet a while to warm to their second-half task but they built gradually to force Concord into a more defensive position. Chances came and went, with Egan driving a low cross into the box that Bingham saw deflected wide.

Another Cundle run and shot was saved by Roberts before a further spell of yellow cards unsettled the flow. Fleet’s tempo was buoyed by the introduction of Poleon on the hour and on 66 minutes Tanner sent a smart strike zipping through a crowd but past the post.

Superb running from Poleon wide on the right slipped his marker on the byline and he found Mekki in a great shooting position but the substitute’s effort was wayward and flew off target.

Fleet kept pressing but found themselves unable to force the issue. Bingham found Cundle with a pass out wide and the No.15 cut in but seemed to delay his shot too long. A minute later, Poleon was able to scoop the ball home as Cundle’s shot bounced off a post and Fleet fans and players had already begun celebrations before the assistant referee decided on an offside decision and raised his flag.

He repeated the trick moments later when Tanner arrowed a long pass to Ben Chapman in the box and fans would have been forgiven for thinking their chances just weren’t going to convert.

But that would have been to reckon without the character to keep coming forward. Seven minutes from the end, Tanner played a spell of possession football around the box and Cundle was invited once more to run from the left by a poor Concord clearance, this time he made no mistake, taking it on his chest and sending a shot across Roberts and in to the delight of the home support.

There were some anxious moments as Concord forced a succession of set pieces in the final minutes, and Solly got the last touch off the line in a huge goalmouth scramble, but the home side saw it out and the three points was theirs.

Ed Miller has been Ebbsfleet United's communications manager and programme editor since 2014 and responsible for the club website since 2007. Contact him on ed.miller@eufc.co.uk
PrevPreviousPreview: countdown to Concord
Next“Winning and nothing else”Next