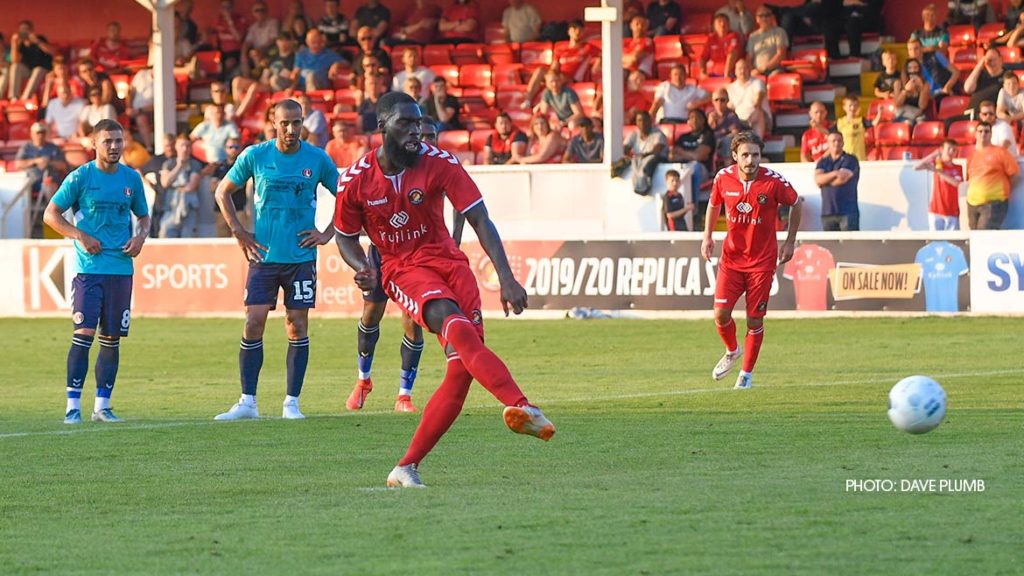 Fleet picked up their second friendly victory and did so in some style over a very strong Charlton Athletic side at the Kuflink Stadium this evening. Ayo Obileye’s fourth goal of pre-season, courtesy of a penalty, and a second by trialist striker Tomi Adeloye were too much for Charlton to pull back despite a late consolation and rally.

Fleet started the night with new signings James Ball and John Goddard and it was the former who saw the first action of the evening, finding just enough room for a low drive on four minutes that spun just wide of the post.

The Championship side should have taken the lead on 10 minutes, however, when the speedy Lyle Taylor advanced on to a Jake Forster-Caskey pass and homed in on goal. He was pushed wide by Nathan Ashmore but managed to take the ball around the Fleet goalkeeper, delaying his shot into an empty goal just long enough for Jack King to block the attempt for a corner.

Charlton showed all too few of those quality flourishes and it allowed Fleet to settle into a pattern of play with which they were comfortable. A mistake in midfield was pounced on by Sean Shields who scampered down the right and delivered a cross that found its way to Goddard at the far post but he was stopped eight yards out by Anfernee Dijksteel.

George Lapslie’s lay-off to Albie Morgan gave the Addicks another sight of goal and he sent Ashmore sprawling with an effort that grazed the post.

Back came the Fleet and from Ashmore’s high goal-kick, ex-Chelmsford, Hartlepool and Dagenham man Adeloye jumped well to win a back-header that Shields was first to latch on to ahead of goalkeeper Ben Amos but the attempted lob was cleared for a corner.

Amos and his defenders had lived dangerously at times stroking the ball around inside their box but it was in front of it that they committed their biggest howler on 29 minutes, a misplaced pass going straight to Adeloye 18 yards out. He spun but found his path to goal blocked despite Ball screaming for a pass in space to the left.

Fleet took the lead two minutes before half-time when Adeloye, in a similar position just inside the box, tried to squeeze between Ben Purrington and Dijksteel only to be sent to the floor and the referee pointed to the spot.

Minus Danny Kedwell after almost five years, Fleet fans were taking bets on the likely taker and it was pre-season’s unlikely hotshot Obileye who shimmied his way to the ball and powered a strike beyond Amos.

There was still time for the visitors to muster another excellent chance when former MK Dons striker Chuks Aneke, whose power through the middle had been Fleet’s chief headache, laid a ball into Taylor and his effort looked to have beaten Ashmore only to come off an outstretched Fleet leg.

Unsurprisingly, substitutions slowed down the second half, with Fleet making changes a few minutes apart while Lee Bowyer waited until the hour mark to swap his entire team.

Just before that, Fleet had grabbed their second goal and it was created by Goddard who swung in a fantastic searching cross from the right that dropped inside the six-yard box, Adeloye reacting quickest to scoop the ball past Amos.

Fleet had their chances to make it 3-0. Goddard meandered into the box and cut a delivery into Shields who slipped 10 yards out before he could connect and substitute Gozie Ugwu saw a lob drift just off target as he hoisted it over Dillon Phillips.

The game livened up again in the closing minutes as Abraham Odoh looked busy attacking from the middle and Callum Harriott bent a shot just over Ashmore’s upright.

Former Bromley wide man Brendan Sarpong-Wiredu hugged the right touchline and his luck seemed to be out with overhit crosses sending him off in fruitless pursuit. However, he got his reward two minutes from time, racing on to Odoh’s measured pass and sweeping an accurate shot low between Ashmore and his near post.

Ashmore had Jamie Grimes to thank for a double tackle after the Fleet goalkeeper got into trouble trying to take the ball around Harriott and though the Addicks looked eager to get an equaliser, they ran out of time and Garry Hill’s men prevailed.

Ed Miller has been Ebbsfleet United's communications manager and programme editor since 2014 and responsible for the club website since 2007. Contact him on ed.miller@eufc.co.uk
PrevPreviousAddicks add new level of class for friendly
NextEncouraging but more to do, says bossNext