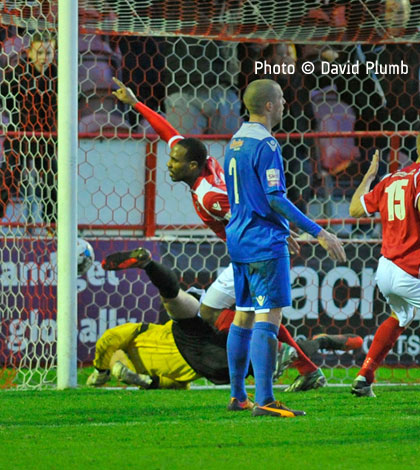 Aiden Palmer set the seal on an extraordinary Fleet fightback as Steve Brown’s side came from behind to beat play-off rivals Bishop’s Stortford – and all in the final 15 minutes of the match.

Cliff Akurang’s first-half header – his third goal against the Fleet this season – had set Stortford on their way and they looked to be comfortable with their lead until Ben May equalised on 75 minutes and Palmer struck six minutes from time.

There was only one change in the Fleet line-up as Dean Rance sat out the first of his two-match suspension and that meant a recall for Michael Corcoran in midfield. For the visitors, ex-Ebbsfleet defender Johnny Herd started but Liam Enver-Marum was on the bench.

With hardly a drop of water in sight after a monumental effort in clearing the pitch the day before, Fleet got off to a wobbly opening and a misunderstanding between Osei Sankofa and Preston Edwards saw the pair collide outside the box, recalling their faux pas from the Dover game. But the Fleet defence quickly settled and they had to as the visitors’ front line, led by Akurang and Brian Woodall, had plenty of power and movement.

Edwards was down well to a sixth-minute shot from Anthony Church after a fortunate bounce had put the Stortford man through on goal. And minutes later he and Chris Sessegnon combined to thwart Akurang as he bundled his way into the six-yard box amid furious shouts of offside from fans and Fleet players.

Fleet’s response was a cross-cum-shot from Michael West’s free-kick that floated centimetres wide of the upright and then on 19 minutes a golden opportunity when Palmer’s high ball into the box outfoxed the Blues’ defence. Cook brought it down well but with the whole goal to aim at, he lobbed a soft effort straight into goalkeeper Cowler’s arms.

Stortford were a mobile and physical side and Fleet were struggling to cope, with May unable to do much against Matt Johnson’s aerial prowess, while Harry Baker had far too much room to roam as he got forward down the right flank. And on 23 minutes, the visitors capitalised on that to take the lead. A disputed corner saw the ball clear the middle of the box and make its way to Woodall who returned it with aplomb and Akurang was able to climb high and nod it past Edwards.

Fleet should have been level almost immediately when Billy Bricknell rounded Cowler but couldn’t get his shot away in time and had to play the ball back into the middle, from where Corcoran flashed it wide. Then May was scythed down as he ran towards goal but the referee played the advantage, Bricknell crossed and Cook shot straight at Cowler.

Bricknell had one more chance before half-time, shooting wide after May had chested it into his path but at the other end Sankofa produced a superb tackle on Woodall to deny Stortford a second.

Fleet were slow to step up a gear in the second half, a Corcoran effort high and wide the best effort of the opening period. But the visitors were penned into their own half and signs that the home side could up the ante came when Cook arrowed a free-kick from distance straight down the middle that Cowler had to tip over the bar.

The visitors were roused back into life from the hour mark, however, and Jake Hall’s shot curled behind much to the relief of Edwards while the Fleet keeper had Lorraine to thank for getting in the way of Church’s drive moments later.

With the Fleet toiling to create much, it was a clever build-up involving substitute Alex Osborn and Sessegnon that saw the full-back fire a low shot that Cowler had to turn behind at his near post. It was the first real carving open of the Stortford defence and six minutes later came another.

Sessegnon again got into a good position and sent in a cross that Bricknell controlled, turned and fired against a defender’s leg. As the ball spun loose in the six-yard box, May pounced and sent a shot ricocheting into the net off another leg for the equaliser.

Fleet almost handed the initiative back to the visitors when Hall struck a goalbound shot from a free-kick but Edwards made an excellent save to knock it over the bar.

Suitably warned, Fleet stepped it up for the final 10 minutes and on 84 minutes Stonebridge Road was rewarded with a winner. Daryl McMahon’s delivery to the near post was centred where Palmer was lurking and he met it to scramble it over the line against his former club. Fleet could have added to their tally when substitute Michael Thalassitis raced clear but chose to go it alone as Osborn was haring down the right unmarked.

Osborn then turned provider minutes later, sending in a delightful ball that split the Stortford defence but Thalassitis met it first time, shinning it wide of the target. And then Bricknell got the right side of the visiting defence from McMahon’s pass but Cowler blocked him from 12 yards with a good save.

Stortford made a flurry of late substitutions, including the appearance of Liam Enver-Marum, but though they looked anxious to get back on terms, their composure in the final third was gone and Fleet took a vital – and somewhat unlikely given the first hour’s play – victory.

Ed Miller has been Ebbsfleet United's communications manager and programme editor since 2014 and responsible for the club website since 2007. Contact him on ed.miller@eufc.co.uk
PrevPreviousThe BIG Fleet sale!
NextGround staff praised after conquering the weatherNext