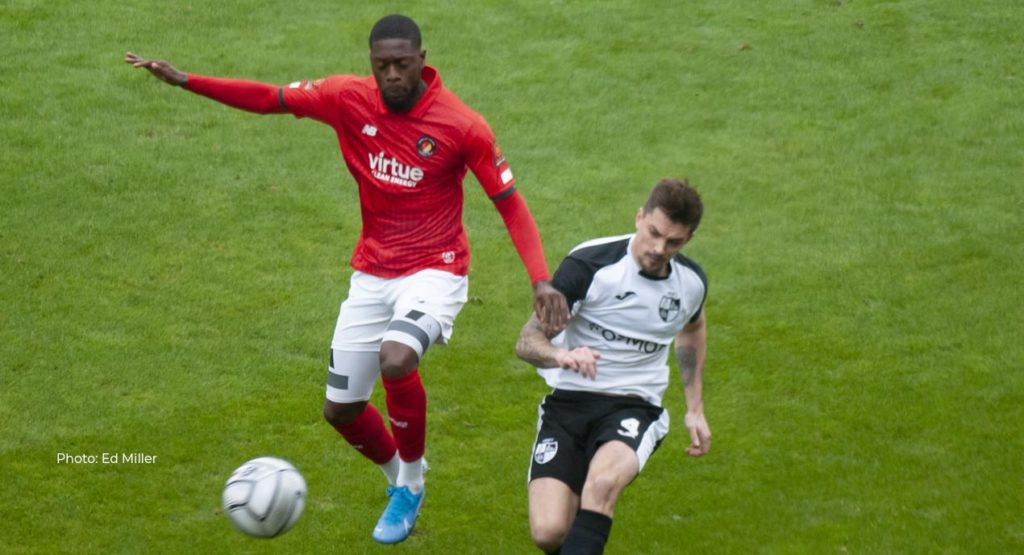 It’s the First Round Proper of the Emirates FA Cup for the Fleet after Rakish Bingham and Chris Solly wrapped things up in a bright, positive and eye-catching first-half display from the home side.

Fleet had a number of excellent chances and only Alan Julian’s prowess in the visitors’ goal kept the score down to just the two as the home side turned the tables on a Hampton team that had earned the earlier bragging rights in the league.

It’s Ball No.63 to look out for in the First Round draw from 1pm on ITV this Sunday afternoon – and for the superstitious, that number just happens to coincide with the year of the club’s greatest ever cup run!

For his third match in this season’s competition, Dennis Kutrieb gave Chris Haigh another start in goal and brought in Alex Finney and Jack Paxman too, with Josh Gould, Sefa Kahraman and Dominic Poleon making way. And the Fleet boss sprung a surprise on his opposite number Gary McCann with a back four underpinning the home side’s formation.

A lightning start could have sent the game Fleet’s way from the opening minutes. With the very first attack from kick-off, Bingham set Lee Martin free and he weaved into the box, a shot coming back off Dean Inman’s hip and then bouncing invitingly around the six-yard box before running behind.

Three minutes later Tobi Adebayo-Rowling’s cross whipped behind Martin but sat up for Greg Cundle, whose snap shot was blocked by a good Sam Cox intervention.

Fleet played a confident, patient passing game, with Jack Paxman busy and Ben Chapman stroking the ball into Solly and Craig Tanner as the home side searched for a chink in the Hampton armour.

But the visitors had their first good opportunity on nine minutes, a cross dropping to Kyron Farrell and the man who scored Hampton’s free-kick against the Fleet last month whistled a driving shot just over the upright.

Back came the Fleet and a quick forward move had Paxman feeding Adebayo-Rowling from the right channel into the box, the resulting cross really dangerous for Cox as he flew in to attempt a clearance but missed and Cundle couldn’t quite get there.

The game became a little locked into a midfield pattern of play with neither side really pushing forward with real intent but Fleet were nevertheless pinging the ball about between themlvesse to keep the visitors chasing. Joe Martin was cautioned for upending Jorome Slew on 21 minutes, though Kutrieb was incensed when a similar incident committed on Finney in the Hampton half didn’t yield similar.

He was in a better mood by the 26th minute as Fleet opened their account with some style. Paxman was on to a half-clearance in a flash and as he spotted Bingham’s run, he lifted the ball over both Farrell and Zach Dronfield, giving Bingham space to race in and fire a low shot into the opposite corner as Julian came to meet him.

The opening goal was all the encouragement the Fleet needed to step things up another gear. On the half hour, they had a glorious chance to make it 2-0, Paxman again the architect, supplying Lee Martin. Julian got the faintest of touches to divert the skipper’s close-range shot and he was back across goal again to hack Bingham’s on-target follow-up off the line before Charlie Wassmer cleared.

Hampton weren’t done though and could have been level on 34 minutes as Solly was out quickly to deny Tyrell Miller-Rodney from a corner. That led to another set-piece and Wassmer got a firm header on that one, Haigh reacting brilliantly to push it over the bar.

Fleet stepped up the pressure once more as the half drew to a close. An excellent move between Cundle and Lee Martin, with two exchanged passes, found Bingham 10 yards out. He eased a shot past Farrell and Julian and it rolled agonisingly wide of the post with groans of disbelief from the Plough End.

Another superb effort two minutes before half-time was again cancelled out by Julian as Fleet racked up the corner count. Adebayo-Rowling got away down the right as he was constantly managing all afternoon and his cross was met by Cundle whose first-time effort was saved on the line by the Beavers goalkeeper who then somehow got enough on Tanner’s follow-up to push that aside.

The goal that had been threatened arrived on the stroke of half-time. Yet another corner came floating in and it was an excellent one from Cundle, delivered at pace and curling in towards the near post where Solly met it with power to send the ball shooting past Julian for 2-0.

Hampton might have clawed their way back into the game early on in the second-half when substitute David Fisher had space at the far post to take down Jake Gray’s cross. He kept his shot low and on target and it needed Finney to clear off the line and scoop the ball into the safety of Haigh’s arms.

Julian might have enjoyed a somewhat quieter second half but he was called into action once more on 56 minutes when Tanner’s quickly taken free-kick was dinked forward by Bingham and Lee Martin strode on to it, flashing a shot towards goal that the Hampton keeper got his fingertips on to send it just wide.

Substitute Alfie Egan needed only a minute on the pitch to make his presence felt, smacking a low effort across goal from Adebayo-Rowling’s pass with Julian diving but missing that one as it skipped the wrong side of the post.

Slew sent a shot over from a good position after neat work by Ryan Gondoh but in truth Fleet weren’t under much pressure and didn’t look likely to surrender their advantage as the time ticked away. Egan might have fancied a third for the Fleet six minutes from the end when he robbed a defender 25 yards out and carried the ball into the box, attempting to round Julian before that was blocked and cleared away.

The second period was a much more low-tempo affair but with the Fleet having done such fine work in the first-half, they could afford to see the game out knowing the place in the First Round and the £9,375 prize money was theirs.

Ed Miller has been Ebbsfleet United's communications manager and programme editor since 2014 and responsible for the club website since 2007. Contact him on ed.miller@eufc.co.uk
PrevPreviousPreview: the Proper prize awaits…
NextThe nice stuff and the hard work – we’re doing both, says bossNext