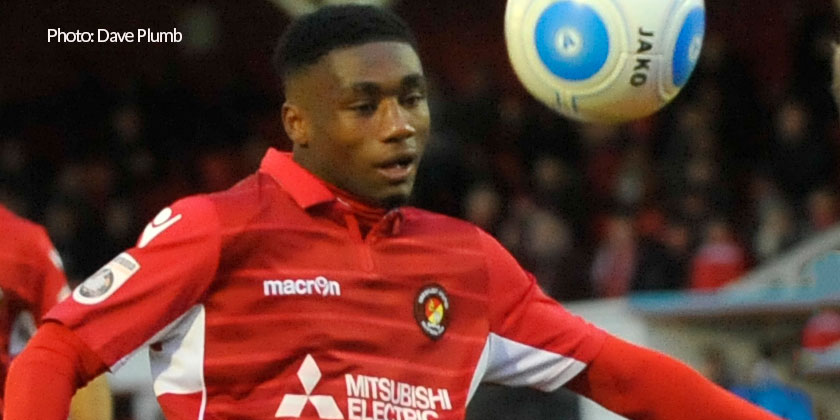 Darren McQueen’s quickfire first-half brace sealed the Fleet’s last home win of 2016 to take the young striker to 12 goals for the season and, more importantly, keep his side in the hunt in the top three of the table.

Half of Fleet’s new stand was open for the first time and though the photo opportunities were quite literally lost in fog, Fleet provided the Christmas cheer with a competent win.

Daryl McMahon resisted the temptation to make any changes to his starting eleven, despite the return of Mark Phillips and Yado Mambo from suspension/being cup tied respectively and neither of those made the squad.

Fleet rattled the visitors early on when a Danny Kedwell cross from the right clipped the top of the crossbar but that was about the only talking point in a very tame opening half-hour with defences on top. Gosport had Dan Wooden partnering top scorer Warren Bentley up front but neither player was able to unsettle the Fleet defence while at the other end, the home side probed without ever breaching the back line.

Their best effort, the eventual goals aside, of a quiet first half saw Kedwell climb to a ball upfield and he nodded it down for McQueen who was well placed but rather scuffed his shot over the bar. Ten minutes on from that one, Jack Powell’s free-kick from far out bent around the wall to meet the target but Nick Jordan was well placed to gather it.

Gosport got forward on a couple of occasions as they broke from the back but never with enough purpose to cause a real threat and it needed a moment of quality, it seemed, to liven the game up.

It duly arrived and it came courtesy of Andy Drury’s carefully weighted through ball on 32 minutes. With McQueen embarking on a run, Drury measured his pass carefully and McQueen danced the ball around Jordan and managed to hit the bottom far corner despite the narrowing angle.

With Gosport still gathering themselves after that, they were left chasing shadows, specifically McQueen’s, two minutes later. A high ball forward was flicked on by Kedwell and McQueen was on to it swiftly, sliding in to propel the ball beneath goalkeeper Jordan for 2-0.

Another long punt upfield almost produced a swift hat-trick for McQueen but he sent that chance over and Powell had a late effort but hit a set piece into the side netting. Gosport’s only effort of note came seven minutes before the break when Ashmore had to make a smart one-handed stop from Aaron Dawson before the ball bounced behind for a corner, which Wooden then headed over.

With Fleet two goals to the good, McMahon opted to attack his opponents a little more, bringing on Stuart Lewis for Dean Rance. The home side managed the second half perfectly, restricting Gosport to little more than half-chances from free-kicks. Drury and Powell linked up well in midfield and brought plenty of pressure to bear in the final third but Fleet just couldn’t force a third goal.

Kedwell crashed a shot off the post on 57 minutes after a great cross from the right by Anthony Cook sat the ball up for the Fleet skipper. Drury sent an effort over and Cook enjoyed a rapid run along the wing but lifted his eventual shot too high.

Sean Shields was introduced for Cook just after that and he was full of running, delivering a couple of excellent crosses late on for Kedwell who saw both efforts blocked in the box, while having two chances himself denied by defenders.

Kedwell also supplied third substitute Bradley Bubb with a path to goal and Bubb shrugged off the defender but sent his shot off target. Gosport had a short spell in the final quarter with a couple of corners and a free-kick that they should have done better from but Fleet were in no mood to lighten their grip on the game and they happily pocketed the three points.

Ed Miller has been Ebbsfleet United's communications manager and programme editor since 2014 and responsible for the club website since 2007. Contact him on ed.miller@eufc.co.uk
PrevPreviousWe’re halfway there…
NextFleet round off a good week for the gafferNext