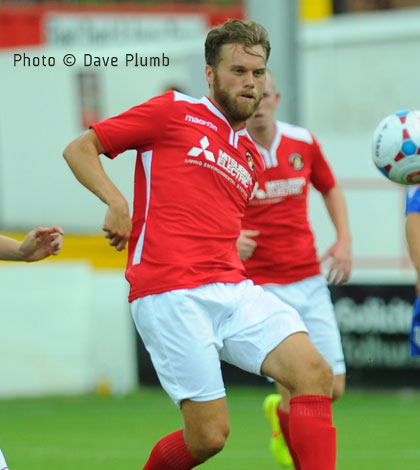 The Fleet started off on the right foot in front of a four-figure crowd with a hard-fought win over an energetic Concord side – and had skipper Daryl McMahon to thank for breaking the deadlock just as the game was threatening to become an exercise in frustration.

Much of Steve Brown’s selection was determined by injury, with Joe Howe failing a late fitness test to add to the list of walking wounded. There were four of the new signings on show, with starts for Kenny Clark, Tommy Fraser, Matt Godden and Charlie Sheringham. For all his promises to shake up his relatively small pack after the weekend, Concord manager Danny Cowley named an unchanged side.

Fleet looked bright in the opening spell without unduly troubling the Concord defence, Anthony Cook blasting an early free-kick over the bar. Indeed Concord’s biggest defensive headaches were their own defenders as they lost two of them inside the first 20 minutes. First, on 11 minutes, skipper Steve King limped off, followed nine minutes later on a stretcher by Jack Lampe.

Cook was full of running and trickery and the chief architect of the best of Fleet’s attacking play, while Godden produced plenty of neat lay-offs. A trademark run down the flank and along the byline on 15 minutes by Cook saw Sheringham slide in just inches away from the rolling ball. A minute later, Godden and Sheringham combined to supply Cook and he lifted his shot just over the bar.

That was Fleet’s best spell, however, as Concord adjusted to their new line-up and absorbed most of the home side’s attempted attacks from midfield. Neither team appeared to be too adventurous until the five minutes of stoppage time at the end of the first half when suddenly there was a flurry of action.

Concord had two chances, the first when Steve Cawley nipped in ahead of Aiden Palmer and an onrushing Preston Edwards but the Fleet goalkeeper got in an important block. Edwards was unable to do anything about the second chance when Jordan Chiedozie won a bouncing ball ahead of the keeper and ballooned an audacious lob towards the top far corner that seemed certain to go in but mercifully flew off the upright.

At the other end, McMahon got on the end of a loose ball on the edge of the box and hit a shot that swerved off a defender and needed Jamie Butler in the Concord goal to tip it to safety with his fingertips.

The second half seemed reminiscent of the previous season at times, with Fleet their own worst enemy in the frustration stakes as Concord did their best to upset the home side’s forward momentum. The referee seemed keen to clamp down on anything he deemed an infringement with the result that both sides were continually hauled back by the whistle and a flurry of often unnecessary cautions were issued.

Gary Ogilvie ruffled the side netting with a free-kick that looked from some angles as if it had crept in and Edwards was forced to punch away another piledriver of a set piece, this time from Sam Collins, as the visitors’ tails were up and they sensed a result. On the hour mark, Cawley took advantage of Fleet’s preoccupation with a refereeing decision to sling one across the six-yard box as the game became very scrappy.

And just as the murmurs on the terraces started to get louder, the Fleet skipper popped up with the first goal on 67 minutes. It came courtesy of Cook’s jinking run which took him past three players and inside the final third but he lost the ball. McMahon seized on it before Concord could clear and surged forwards before despatching a thumping shot low and hard beyond Butler.

It was just the filip the home side needed and seemed to re-energise them. Cook sent a dipping shot over the bar from 20 yards out before Fleet put the game out of Concord’s reach on 81 minutes. It was fine approach play by Cook and Palmer to  play in Godden and he unselfishly slipped the ball to Sheringham in a central position who swept a shot past Butler from 10 yards.

Substitute Matt Johnson had a good effort saved and then Sheringham turned and fired low past the post as Fleet sought to make it 3-0 but by then the points were wrapped up to get the first win out of the way at the first hurdle. Which is already an improvement on last season!

Ed Miller has been Ebbsfleet United's communications manager and programme editor since 2014 and responsible for the club website since 2007. Contact him on ed.miller@eufc.co.uk
PrevPreviousJordan joins Lewes on loan
NextGet back to football with The Gr@ndNext