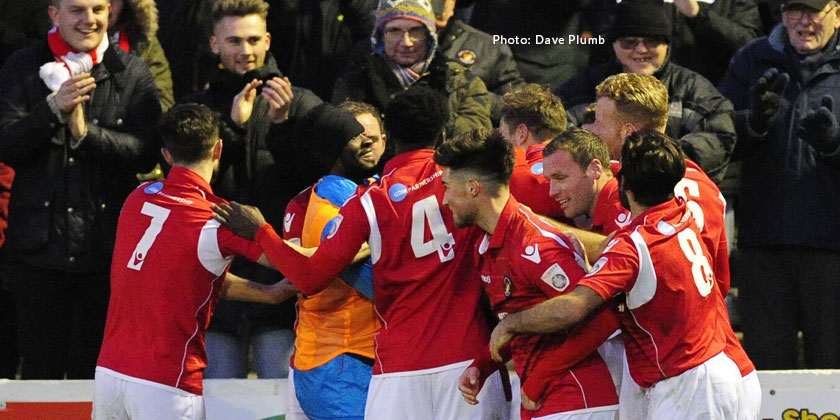 Fleet moved six points clear of their opponents and closed the gap on Maidenhead to five points as a thoroughly decent performance, especially in an attacking second-half, was the perfect tonic for manager Daryl McMahon after last week’s FA Trophy exit.

Fleet also gained a measure of revenge after Chelmsford had won the earlier head-to-head at the Melbourne Stadium and overcame a Rod Stringer side that hadn’t lost a game in any competition since early November.

McMahon made two changes to his side as Dave Winfield was passed fit and Sean Shields also came in, with Mark Phillips out through injury and Anthony Cook relegated to the bench. Chelmsford left their two sharpshooters Shaun Jeffers and Elliott Buchanan on the bench but still had plenty of firepower with Chris Dickson leading the line.

Both sides had chances early on, with Sam Deering cutting into the box from wide inside the first minute and meeting a hefty challenge in the box from Michael Spillane but any penalty shouts were fairly half-hearted. Chelmsford went even closer to a goal two minutes later when Dickson’s ranging cross found former Fleet winger Robbie Willmott in space at the far post and his on-target header was expertly pushed over the bar by Nathan Ashmore.

Chelmsford were ever so slightly the more adventurous in the opening minutes, on a slippery surface, but Fleet looked to pick them off and Darren McQueen’s 9th-minute snapshot as he turned into space was a good effort though not powerful enough to trouble Ross Fitzsimons in the City goal.

Half chances came and went for both sides, Spillane glancing a Willmott set piece over the Fleet bar and then Deering again leaving Fitzsimons little to do with a weak shot after a good Fleet build-up. And on 17 minutes Dickson should probably have done better when Winfield missed his clearance, allowing the ball to run free but though the Chelmsford striker charged on to it, he could only send a low shot to the near post which Ashmore dealt with.

The best chance of the first half came Fleet’s way on 21 minutes when Marvin McCoy’s throw was helped onto the bar by Kedwell and though the ball fell invitingly for Deering, he somehow steered it wide of the target.

Refusing to be disheartened by the miss, Fleet gradually got on top of their opponents from that point and began to win the midfield battle, though chances were few and far between for a 15-minute spell, City having one effort well-blocked by the leg of Kenny Clark.

And it was Clark, in his 100th game for the club, who struck two minutes before half-time to give his side the lead. A Jack Powell corner reached Kedwell beyond the far post and he steered the ball into the middle of the box where Clark was well-placed to bundle the ball home amid a crowd of players.

Fleet started the second half well and by and large refused to give Chelmsford any quarter, though the visitors enjoyed a spell with 20 minutes left on the front foot. But it was the home side who dictated the pace of the game and within seven minutes Rod Stringer had seen enough of his rather blunt attack and brought on Shaun Jeffers for Josh Rees.

Jeffers’ first contribution was to receive a caution for a deliberate dive in the penalty area but at the other end, Fleet slowly turned the screw with constant pressure on the City goal. On the hour mark, Kedwell saw a shot blocked and followed that up with another that he pulled across goal and though Deering slid in, he couldn’t make contact in the six-yard box.

McQueen, too, was a constant menace despite being well-marshalled by the tall Mark Haines and whenever a ball was played behind the City line, the young Fleet striker was a threat.

On 66 minutes, he almost steered a fortunate shot past Fitzsimons when he got to a ball ahead of Haines but it rolled across the line and was cleared. Five minutes after that, the irrepressible Deering, always buzzing around the Chelmsford box, managed to find space with a deft turn of pace but blasted his shot over and then Kedwell headed a ball into McQueen’s path but it rolled over his foot in the six-yard box and away to safety.

City had a couple of chances, the best being Ashley Miller’s shot that fizzed wide after a rare incisive move from the visitors up to that point while Ashmore was equal to shots on two other occasions. Connors stood up well to the threat of Willmott down the left while Winfield commanded the box well on the occasions City did sniff a chance or two.

With Andy Drury and Bradley Bubb on for the last 15 minutes, Fleet did well to take the sting out of the game and always had Kedwell and Deering as outlets for a counterattack. Clark twice had opportunities to extend his and Fleet’s scoring record and in one goalmouth scramble, saw his low shot turned around the post.

But with four minutes left, Fleet sealed the win. Deering was hauled down by Spillane out wide, only inches from the box, and Drury lifted a free-kick into the middle. It was helped on by Winfield and fell to Bubb who took a single touch and drilled a low shot past Fitzsimons for a well-received 2-0!

Kedwell should have had a reward for a decent shift in the final minute when he got clear and fired a shot on target but Fitzsimons made a brilliant one-handed stop. It mattered little for the home side, however, who saw out the remaining minutes without being troubled to take their ninth point of 2017.

Ed Miller has been Ebbsfleet United's communications manager and programme editor since 2014 and responsible for the club website since 2007. Contact him on ed.miller@eufc.co.uk
PrevPreviousClark targets old friends at the turn of the century
NextMacca hails team work ethicNext