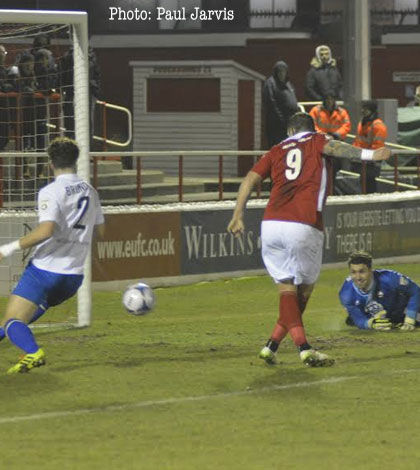 Ebbsfleet United made it through to the last eight of the FA Trophy with a convincing display against Braintree Town that owed much to the predatory instincts of their strike pairing and goalscorers Danny Kedwell and Adam Cunnington.

North Ferriby United now await on Saturday – no easy task against a side closer to the play-offs in Conference North than Fleet are in the South – but on tonight’s evidence, Jamie Day’s side are becoming ever more effective as a unit.

The Fleet boss recalled Brendan Kiernan, Dean Pooley, Anthony Acheampong and Dean Rance to the starting line-up at the expense of the cup-tied Tom Bonner plus Sean Shields, Kelvin Langmead and Matt Johnson.

But whereas Fleet had come out of the blocks last Tuesday with eagerness, they were slow to get going in front of a home crowd, much of whom had yet to see the new-look side in action.

Braintree bossed the early period in terms of territory, though failed to carve out a clear-cut opportunity and inside four minutes Stuart Lewis attempted to bulldoze his way into the box for the home side but a combination of white shirts eventually pushed him off the ball. It was a fairly sedate affair for much of the first half, with the referee hardly helping matters with constant intervention, a pattern he maintained throughout the match.

Chez Isaac had the best effort for the visitors on 21 minutes with a long-range shot that wasn’t far off before Kiernan, who had threatened on several occasions for the Fleet, made the most of a Mitch Brundle slip to cross for Cunnington whose close-range header was tipped away by Nick Hamann.

And minutes later Kedwell showed great skill to earn space inside the Braintree box but his cross had just too much weight on it, falling eventually to Theo Lewis whose effort was blocked. Fleet were beginning to pick up the pace and they were rewarded on 37 minutes courtesy of some superb approach play. Rance and Acheampong built from the back before the ball was played down the flanks to Cunnington. He turned it back inside to Matt Fish whose effort was parried by Hamann but only into Kedwell’s path and he swept the ball over the line for 1-0.

Kiernan then saw his cross headed off the line by Alan Massey as Fleet closed out the half in top gear, with Braintree somewhat ragged, their discipline tested by what they deemed to be an elbow on Dan Sparkes, who was taken to hospital after being substituted.

Fleet struggled to get into the game as the second half began, Braintree pushing them back into the final third, but the home side’s defence stood up well to the test. It came at some cost, however, with two Fleet players finding their way into the book of an increasingly fussy referee. Isaac tested Edwards with a free-kick while Jordan Cox smashed a shot just over the bar with Fleet angrily claiming for a foul on Kenny Clark.

Rance’s comeback was ended prematurely when he seemed to catch his ankle and went over on it, clutching it and in some pain, so Fleet replaced him with Langmead, Pooley moving across to full back and Fish pushing further upfield. It stemmed the Braintree flow for a while until Brundle saw a shot deflected from a corner and from that Edwards produced a wonderful save from Simeon Akinola’s low header.

But Fleet’s erstwhile defence eventually weathered the Braintree attack in the final 10 minutes and took the game back to the visitors. Kiernan finished off a decent counterattack with a shot that Brundle blocked in the six-yard box before Fleet wrapped things up four minutes from time. As Massey attempted to clear the ball while facing his own goal, Cunnington outmuscled him, extricated the ball and powered through on goal, firing past Hamann to give Braintree no way back. Kedwell might even have added a third with a shot that flew across the goal but it mattered little as Fleet are going to Ferriby.

Ed Miller has been Ebbsfleet United's communications manager and programme editor since 2014 and responsible for the club website since 2007. Contact him on ed.miller@eufc.co.uk
PrevPreviousLeo stars with first senior strike
NextFerrying you to FerribyNext