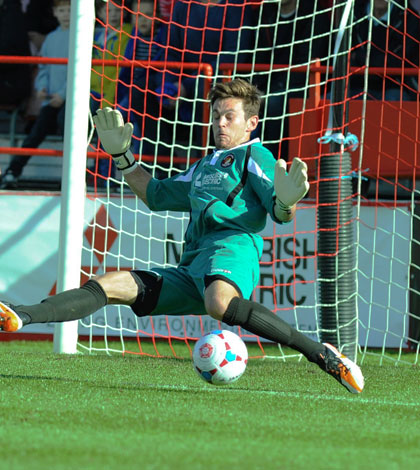 Fleet will be quite happy to end their association with Basingstoke Town this season here and now after a drubbing that ended 2014 on a low point. After beating Chelmsford by the same 5-1 scoreline on Boxing Day, hopes were high for at least a measure of that performance, but Basingstoke recorded their third win over the Fleet this season and did so by quite some distance.

There was only one change from the Chelmsford game, with Sean Shields replacing Matt Godden who had to be content with a place on the bench. Fleet set about their task much as they did in the FA Cup game against the Dragons, on the front foot and with plenty of attacking purpose. Shields had the first opportunity with a shot just wide of Stuart Moore’s post.

Fleet kept pinging the ball around the edges of the Basingstoke box looking for an opening and Bricknell turned neatly on nine minutes inside the area but his shot was blocked inside the six-yard box. Matt Johnson thundered a shot a few yards wide of the post from 25 yards and Shields did well to cut another pass inside to Bricknell but Moore again got a hand on it.

But the home side’s 18 minutes of superiority came to an abrupt end from a rather fortunate free-kick courtesy of ex-loanee Louie Soares who hit a fairly tame ball that eluded everyone inside the box and rolled past Brandon Hall and into the net. That goal dampened Fleet’s enthusiasm and they lost all attacking impetus.

The final 10 minutes of the half saw Fleet pick it up again and Tyrone Marsh hit a shot just wide on 36 minutes, though Moore watched it go without too much anxiety. McMahon then struck a post from a free-kick five minutes before the break as Fleet wondered if their luck was out once more.

But in first-half stoppage time, a corner was cleared to Joe Howe and he crossed to Kenny Clark who headed down into the danger area where Johnson was lurking to fire a shot into the roof of the net.

The second-half was perfectly poised for Fleet to finally bury their Basingstoke hoodoo but it turned into a nightmare for the home side. The visitors built patiently from the back and Fleet were second to the ball, unable to win the midfield battles. The Fleet should, however, have edged in front on 51 minutes when James Harper played a dreadful ball towards his own defenders that Marsh intercepted. He raced through but took a touch too much and Moore was able to get down and palm away his shot.

Basingstoke came back and didn’t let up. Chris Flood was allowed too much space by a careless home defence to flash a shot across goal and that was the signal for the visitors to dominate the flanks. Flood had a goal ruled out for offside that looked a little harsh but Basingstoke were rewarded with a legitimate goal on 60 minutes when Lloyd Macklin had free rein to surge forwards and although Hall saved his shot, Simon Dunn was allowed too many chances to bring the rebound down and slot it home.

Shields claimed a half-hearted penalty for the Fleet after that, but then the sky caved in on the home side on 73 minutes. Again Hall was left totally unprotected by his defence – Macklin raced clear, rounded the goalkeeper and Hall brought him down outside the box giving the referee little option but to reach for a red card. Jamie Turner came on for his first Fleet game in 11 years but endured a tortuous start as he couldn’t keep hold of Soares’ free-kick and David Ray had a tap-in to make it 3-1.

Fleet were well beaten already by that stage and Basingstoke were in for the kill. Shaun McAuley fired home a penalty on 85 minutes after Howe had fouled Nathan Smart and it got worse a minute from time as Tom Bird launched a shot from distance that slipped past Turner for the visitors’ fifth.

It was Fleet’s worst defeat since Macclesfield won 4-0 at Stonebridge Road in February 2013 and with Jamie Day labelling the second-half an “embarrassment” and a “waste of money” for supporters, the manager is sure to be eyeing more changes.

Ed Miller has been Ebbsfleet United's communications manager and programme editor since 2014 and responsible for the club website since 2007. Contact him on ed.miller@eufc.co.uk
PrevPreviousChelmsford City 1-5 Fleet
NextHooky New Year!Next