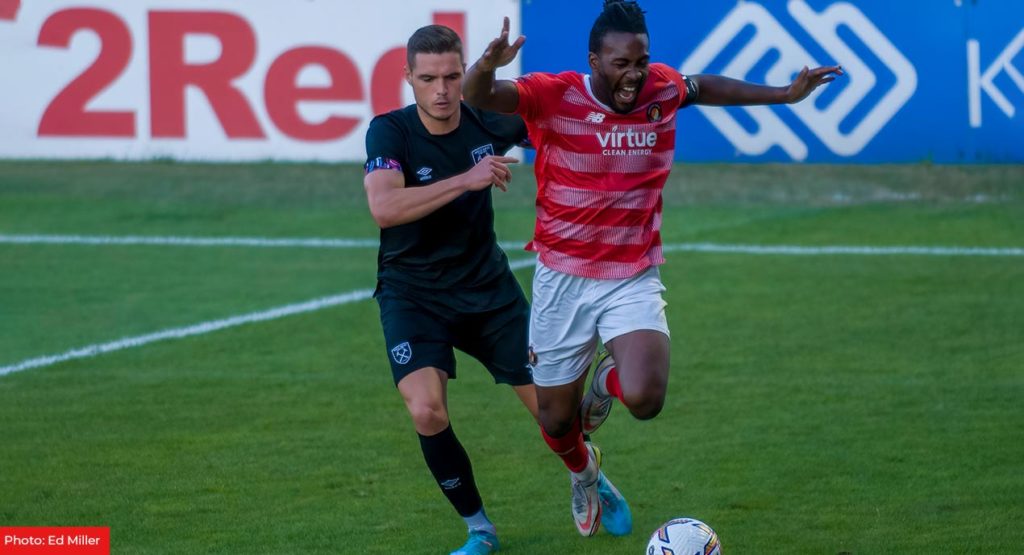 West Ham may have turned the tables from last season as far as the scoreline was concerned but Fleet gave them plenty to think about in an entertaining Friday night game at the Kuflink Stadium.

Hammers U23 boss Mark Robson named a strong side that included talents such as Armstrong Okoflex, Thierry Nevers and Pierre Ekwah, with eight players reappearing from last season’s corresponding friendly. Many of the visiting players were part of the West Ham U23 side that finished as runners-up to Manchester City in last season’s Premier League 2 and had also earned runouts alongside first-team players in friendlies earlier this month.

Nevers had the first solid opportunity on nine minutes as the Hammers began the game with the upper hand, the former Reading youngster’s solo run ending with a shot just wide. And just past the quarter-hour mark, West Ham nosed in front when another good run through the middle by Kamarai Swyer ended with Regan Clayton jumping over Luke O’Neill’s challenge in the box to which referee Lee Venamore rather generously awarded a penalty. Okoflex tucked that one away to give the Hammers the lead.

The Fleet could have been right back in it with the next attack, Greg Cundle breaking down the left and squaring the ball for Rakish Bingham whose low effort beat goalkeeper Krisztian Hegyi but smacked back off the post.

And there was a good shout for a penalty of their own for the Fleet on 22 minutes when Cundle went down as he attempted to skip between two defenders but the referee deemed that one a legal challenge.

More chances came Fleet’s way, Joe Martin slipping a pass outside for Dominic Poleon to run at and place a shot towards the far post but Hegyi did very well to push that away. Then Christian N’Guessan’s timely intervention in midfield released Bingham who took the pass on and fired low past the post from outside the box.

West Ham had an effort ruled off for an offside but then doubled their lead anyway with a goal that also had a hint of offside about it. That came three minutes before the break, Freddie Potts finding Nevers who appeared to have strayed past the last Fleet man. He was allowed to progress and he delivered a pass across the box to Okoflex to find the back of the net with a shot.

It was very harsh on the Fleet’s efforts to that point and it was no less than the home team deserved when they got a goal back before half-time. O’Neill’s free-kick from the right was headed up and towards his own far post by Swyer, falling for Martin to nod the ball past Hegyi.

As in the first-half the Hammers began the second well and Keenan Appiah-Forson’s midfield interception and fantastic run and shot drew a great fingertip save from Chris Haigh to push the ball on to the bar and over seven minutes in. But Fleet quickly found their feet again and responded when Poleon drilled a shot just past the upright.

A flurry of Fleet substitutions on the hour might have disrupted the pattern of things but instead the home side looked even more keen to get the equaliser. A standout performer was Kieran Monlouis who showed immense strength on a number of occasions to drive from the halfway line in his first appearance of pre-season.

Elsewhere, Omari Sterling-James was bright down the right, Elliott Romain physical and dominant in his advanced role and Haydn Hollis immediately loud and well-organised at the back. Poleon nodded Sterling’s cross just wide before Hollis was ever so unfortunate not to put Fleet back on level terms when he side-stepped Junior Robinson and fired from inside the penalty area only to see the ball ping just wide.

Haigh had to be alert as he back-peddled to pluck Swyer’s dipping, deflected effort from under the Fleet bar but a third West Ham goal would have been an injustice too far.

The visitors kept things tight in the closing period, however, but in a friendly well worth the entrance fee, home fans saw some slick, inventive football and plenty of desire from their side that bodes well for the weeks and months ahead.

Ed Miller has been Ebbsfleet United's communications manager and programme editor since 2014 and responsible for the club website since 2007. Contact him on ed.miller@eufc.co.uk
PrevPreviousYour free programme v West Ham
NextPost-match: Dennis Kutrieb after West HamNext