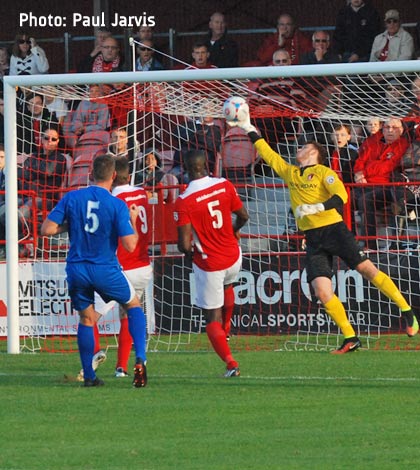 Fleet lost their first regular league match at home since New Year’s Day as Hayes & Yeading United’s second-half goal rush made it an unhappy couple of weeks for home fans.

With just the one, enforced change to the Fleet line-up – Chris Sessegnon in for the suspended Joe Howe –  and Matt Godden absent after injuring his knee in training, Steve Brown had little room to shake up his starting eleven as they sought to make up ground on leaders Basingstoke. The visitors fielded new signing Lewis Ferrell from Farnborough and welcomed England C goalkeeper Calum Kitscha back.

Fleet had a couple of early forays forward, with Anthony Cook’s free kick from the left on four minutes flying across the goalmouth but there was no contact on it to trouble Kitscha. There was little else to warm up the crowd until 15 minutes in when Billy Bricknell’s mazy run past two defenders and cross almost set Charlie Sheringham free but Dean Inman intercepted under pressure from the Fleet No.9.

The visitors were content to stymie the Fleet in midfield and the home side really only found themselves threatened when Brandon Hall’s clearance flew off Kenny Clark’s legs but thankfully bounced to a teammate, while McMahon unintentionally back-heeled a ball just outside the box but there was no Hayes striker poised to take advantage.

Fleet’s best chance was on 24 minutes when Cook again threatened down the left and crossed into the box where Dean Rance dived at the ball but saw his header pushed away by Kitscha. McMahon and Sessegnon then combined and the Fleet full back rather fortuitously got the ball clear of his marker and sent in a decent delivery that Sheringham headed wide.

The visitors looked a little more adventurous as the half closed and Inman should really have given them the lead two minutes from time when he stood unmarked eight yards out but looped his header over the upright. Pat Cox then fired straight at Hall after Ashleigh Artwell had done ever so well to carve out the chance for him.

Home fans might have expected Fleet to push on given their territorial advantage of the first half but the home side seemed to disappear within themselves and produced a very flat performance in the second period. Hayes went ahead on 51 minutes, stunning the Fleet with a well-taken goal. The visitors mopped up in midfield and pushed the Fleet back around the box from where Louis-Rae Beadle arrowed an excellent shot from 12 yards that curled out of the reach of Hall and into the top corner.

Fleet tried to raise their game but the visitors stood up well to the threat. Matt Johnson thumped a low, hard cross into the box on the hour mark that was crying out for a finish and then Sessegnon surged forwards and supplied an excellent ball to Sheringham who shrugged off the defender but tried, unsuccessfuly, to dink the ball over Kitscha when clear.

Kitscha again came to Hayes’ rescue with an excellent stop from Sheringham, though the referee spotted an infringement seconds later, and McMahon did well with a shot from 20 yards that just cleared the bar. Rance then cracked a low shot through a crowded box as Fleet pressed but that again was cleared and then Hayes wrapped things up on 79 minutes. Dan Wishart gathered the ball on the left flank and just about outpaced Sessegnon from where he cracked off a shot that beat Hall and went in off the far post for 2-0.

Shellshocked Fleet had no answer, despite McMahon’s free-kick being deflected into his own net by Matt Ruby under pressure from Anthony Acheampong four minutes from the end that gave the home side some hope. Cook and Rance tried their luck in time added on but it mattered little as Hayes held on for the victory.

Ed Miller has been Ebbsfleet United's communications manager and programme editor since 2014 and responsible for the club website since 2007. Contact him on ed.miller@eufc.co.uk
PrevPreviousBy George, he’s back!
NextNew date for Gosport gameNext