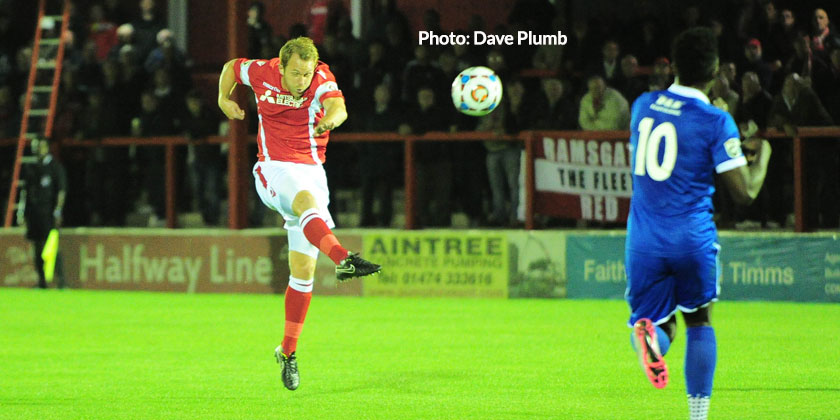 Much like last season’s FA Cup exit, Fleet let slip a lead, saw a number of chances go begging and succumbed to a sucker punch of a goal late on as Chelmsford advanced into the Third Qualifying Round.

The visitors were well-organised and gave as good as they got in the first half and had to remain firm in the face of a strong second-half performance from the Fleet, which they did well enough to record their fourth victory in their last five trips to Stonebridge Road.

City started well and Bagasan Graham saw his low drive stopped by Brandon Hall in the early moments and it took a good 10 minutes for Fleet’s game to flow. Stuart Lewis advanced after making a wonderful interception and he delivered for Godden to have a poke but the ball was cleared. Fleet’s next attack produced a goal, with Kedwell nodding home a Matt Fish cross but it was ruled out for a push on a City defender.

Dean Rance began to get Fleet working and they started to keep Chelmsford at bay before taking the lead on 23 minutes. It was another neat passing move that saw Kedwell receive the ball and square it neatly to Godden on the edge of the box. He cut inside a defender, created some space and arrowed a tidy shot beyond Christian Dibble.

But that good work was undone almost instantaneously, allowing the visitors straight back into the game. A ball forward saw Fish outnumbered down the Fleet right and as Marvel Ekpiteta attempted to play in a teammate with a low pass, Kenny Clark ran on to it and diverted it past his own goalkeeper.

That gave the visitors a boost and they came forward again, Tomi Adeloye riding two challenges before loosing off a shot which Hall had to be down quickly to. The same player was then on the end of a long ball, beating Bonner to it, and his shot from distance wasn’t far right of the post.

Where Fleet were strongest in the first half of Saturday’s game, they reversed that and came out in the second half of this one looking to finish Chelmsford off. Kissock’s introduction for Rance, whose earlier yellow card perhaps preyed on McMahon’s mind, proved to be the difference between the two teams and he got Fleet motoring as the home side enjoyed the bulk of possession and restricted the visitors to very occasional ventures into the home half.

That said, Chelmsford almost found a lead in bizarre circumstances when skipper Mark Hughes rather painfully blocked a Fleet attack between his legs and from the long clearance to the other end, Adeloye saw his shot end up just wide.

The Fleet advance followed and Dibble had to tip a cracking Lewis effort over the bar  on 55 minutes before watching with some relief as Robbie Willmott weaved past two players but struck a shot off target. Fish’s forways down the right flank were becoming more promising as the half wore on and a pair of crosses gave Chelmsford further cause for alarm. His first was lifted just over the bar by Kedwell and his second to the back post was headed into the same area by Godden.

A wonderful move on 64 minutes, with multiple passes in and around the final third, eventually saw the ball fall to Jordan Parkes and the long-range specialist let fly with an effort that once again Dibble tipped over for a corner.

Adam Cunnington replaced Parkes moments later as Fleet sought to wrap things up before extra time with three strikers and he wasn’t far away with a shot that rolled beneath Dibble before the keeper managed to stop it before it squirmed out from under him.

But in the final 10 minutes, City’s resolution seemed to spur them onto greater heights and they had sight of Hall’s goal once more. And eight minutes from time, Fleet could scarcely believe their ill fortune when Graham’s deep cross was turned into the danger area and substitute Hugo Skepelhorn slid in to convert from close range.

Fleet sensed the inevitable and could only mount one late charge, with a Fish cross falling to Kedwell who couldn’t get his shot away from close range and he diverted it into Joe Howe’s path but the full back hit it wide.

That was that and it was Chelmsford who became the first team this season to record a win over the Fleet. The old cliché now applies about concentrating on the league, but nonetheless, this is Fleet’s earliest exit from the FA Cup since a 1999 replay defeat… the swiftest and sweetest medicine for that would be getting back on track against county rivals Maidstone on Saturday.

Ed Miller has been Ebbsfleet United's communications manager and programme editor since 2014 and responsible for the club website since 2007. Contact him on ed.miller@eufc.co.uk
PrevPreviousAdditional facilities laid on for derby clash
NextYouth section benefits from donationNext