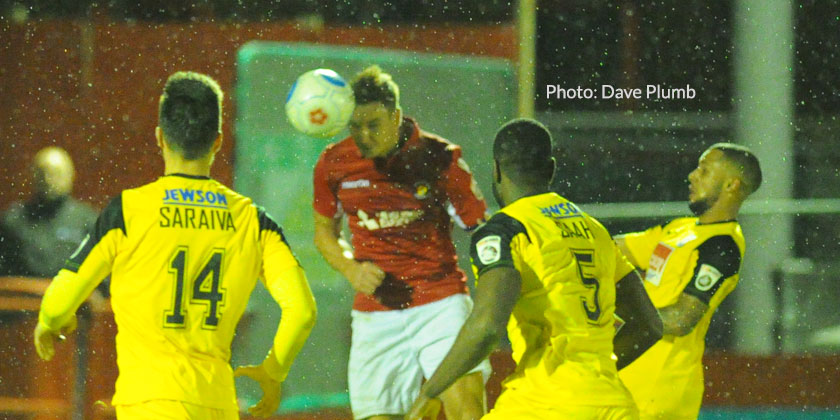 Fleet rescued their unbeaten home record against Woking with two minutes to spare as they deservedly pulled a replay out of the bag with a late Dave Winfield header that went in off visiting player Joey Jones.

It’s all back to Woking on Tuesday as both sides now go into the hat for Monday’s Second Round draw with the tie finely balanced after 90 minutes when there was little to choose between them.

Andy Drury played his first home game in a red shirt for a decade and Winfield returned from suspension while Bradley Bubb also earned a start – meaning places on the bench for Danny Kedwell and Jack Connors, while Yado Mambo was cup-tied.

Charlie Sheringham was first into action when a ball into space saw defender Brian Saah slip up and a good reaction save from Brandon Hall resulted, though the flag suggested offside as the Fleet striker unloaded. After that, Woking imposed themselves a little more on the game and in wide player Jake Caprice had an effective outlet. He also kept Sean Shields well shackled down the left as Drury continually looked to release the Fleet winger.

Ashmore had to dive to cut out a dangerous low cross from Caprice on five minutes and Kenny Clark recovered well when outpaced by Dennon Lewis to slide in and win the ball back as the Woking man looked set to clear the defence.

Most of Fleet’s play saw largely optimistic long balls towards Bubb and Sheringham that Woking’s big back line was equal to. Drury found Shields with a searching ball but the resulting shot was high and wide. At the other end Gozie Ugwu and Fabio Saraiva were causing problems but they failed to really carve open the Fleet back line to get at Ashmore.

From the half-hour mark, Fleet upped their game and Bubb was challenged by Saah in the box but stayed on his feet when the temptation might have been to go to ground. On 36 minutes, Powell slipped an excellent ball through to Bubb. The Fleet striker was rapidly closed down by three defenders but still managed to get a shot on target that Hall did well to turn behind his right-hand post.

The same pair were then involved in a collision while challenging for the ball inside the box. It seemed a 50/50 set-to but the referee deemed Bubb’s tackle a foul and it prompted the angry crowd behind the goal into full voice.

Fleet struggled to get going in the opening stages of the second half and Woking took full advantage. Within three minutes they’d edged ahead after Dennon Lewis had attacked into the Fleet penalty area. His incursion was repulsed but not very far and Luke Kandi ran on to a loose ball and curled a terrific shot around Ashmore from 20 yards.

Fleet pressed and toiled in midfield and had Woking on the back foot but once again clear-cut chances were few and the visitors’ defence impressive. Drury made a burst through the centre on 53 minutes to find Sheringham who did will to get his shot away under pressure but it drifted wide.

That was Sheringham’s final action as both he and Jack Powell made way for Danny Kedwell and Stuart Lewis. Both substitutes immediately had an impact with the former holding up the ball and then laying it into Lewis’s path who managed to get a knee on to the ball but it wasn’t powerful enough to beat Hall.

Darren McQueen was then introduced for Dean Rance with 17 minutes left as Fleet went for broke. Shields’ cross for Kedwell on 73 minutes was as close as Fleet had come, the ball flying just over the bar from eight yards. McQueen, busy and lively as ever, almost got on the end of a Kedwell knockdown into the six-yard box but again Hall’s goal survived as the striker overran it.

Woking weren’t doing much attacking but they still carried a threat when they did and Caprice fire just over while Ugwu’s ball into Dennon Lewis needed Ashmore’s intervention.

Drury forced Hall to punch away a free-kick but his next set-piece proved vital. An unnecessary foul in the corner allowed Fleet’s new signing to send an arching cross towards the far post. Winfield peeled off into space and planted his header against the inside of the post. It rolled away, hit Woking’s Jones on the head and bounced back over the line for the equaliser.

Fleet were really looking to win it in the four minutes of time added on and were a whisker away from doing so. Hall reached a ball intended for Shields on the line and his clearance was won back by Kedwell who sent a low drive along the line and centimetres wide of the far post.

It wasn’t to be, however, and the Trophy run takes another winding path via Surrey on Tuesday evening.

Ed Miller has been Ebbsfleet United's communications manager and programme editor since 2014 and responsible for the club website since 2007. Contact him on ed.miller@eufc.co.uk
PrevPreviousAll change again for centre-back pairing
NextWe deserved it, without a doubt, says Fleet bossNext