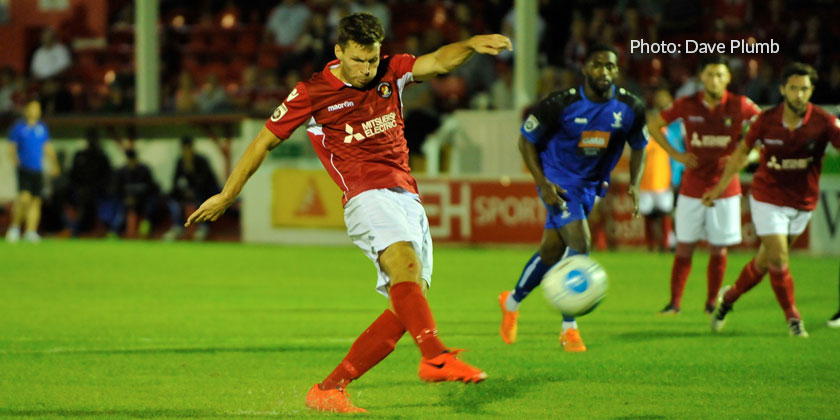 There may have been some inevitability about Michael West returning to Stonebridge Road to steal two points from the Fleet but the bigger story was 10-man Whitehawk snatching a point and Fleet missing a second-half penalty that sent supporters home frustrated.

Fleet had set a much more positive scene at half-time leading by Anthony Cook’s 19th minute goal but a second-half flashpoint turned the game the opposite way in favour of the Hawks after their goalkeeper was sent off for serious foul play on Sam Deering.

Fleet named an unchanged defence but Stuart Lewis returned to the starting lineup for the first time this season, with Jack Powell making way. Sam Deering also earned a start and that saw John Paul Kissock relegated to the bench.

With Deering enthusiastic from the start, Fleet set about Whitehawk with some intent and the Hawks struggled to cope with Cook and Sean Shields weaving in from the flanks. Seven minutes in and Cook flew into an aerial challenge with Chris M’Boungou, the ball fell to Charlie Sheringham abd he knocked it across into Deering’s path eight yards from goal but Ramon Marimon was across in a flash to clear the danger.

Six minutes later and Fleet were still using the flanks to fashion their best chances with Deering again excellent in the approach and Sheringham seeing a close-range shot blocked before Marvin McCoy got around Gabriel Yan seconds later and zipped a low cross all the way through the six-yard box. Shields then laid the ball into Sheringham but his shot lifted over the bar from close range, vociferous appeals for a corner ignored by the officials.

Whitehawk’s best opportunities came from long range, West scuffing a low free-kick well wide and Ahmed Abdulla twice finding room to head at goal but both times he glanced wide. Marimon then enjoyed the freedom of the penalty area to rise highest and plant a header over from a corner. But from that let-off, Fleet scored on 19 minutes as a quick attack saw Cook peel off into space and fire a superb shot from the middle that curled away out of the goalkeeper’s reach for 1-0.

Still the Hawks found room for Yan out wide on the left to deliver crosses onto the strikers’ heads but again Abdulla and then Danny Mills sent their efforts off target. Fleet were much the better side though and Deering and Cook were drawing fouls at every stride forward, the former upended on the edge of the box in a challenge that saw Marvin Hamilton booked.

The home side continued to be bright up to the stroke of half-time and one more Deering cross supplied Sheringham with another chance and his shot was on target but blocked and sent for a corner.

Fleet were primed to build on a fine first-half after the break and initially allowed Whitehawk no room to get themselves back into contention. The only sniff the Hawks had early on was on 52 minutes when Nathan Ashmore dwelt too long while clearing a ball and West almost nicked it off his toes to convert.

Just a minute later, however, and all the action had transferred to the Whitehawk goalmouth. A ball into the box was gathered comfortably by goalkeeper Lucas Covolan as Deering went in to challenge and for little apparent reason, Covolan bundled into Deering, leading with his legs. The referee awarded a penalty and dismissed the Hawks custodian.

It all seemed to be going Fleet’s way but new goalkeeper Adri Munoz didn’t have much to do save watch Sheringham’s spot kick sail over the bar and the 10-man Hawks suddenly fancied their chances. With Shields and Sheringham withdrawn for Kissock and Danny Kedwell, Fleet found themselves being pushed deeper. The Hawks defence seemed to have too much room to advance and feed their midfield and the visitors suddenly looked a threat.

Several times Fleet almost shot themselves in the foot, once when a loose ball was almost sent past Ashmore by one of his own defenders and the goalkeeper then had to reach high for a shot that was deflected over him from Yan. Another ball across goal minutes later was only just missed by Mills and Rodrigo Mann launched a shot that bent away from the target at the last moment.

Fleet fans found themselves watching their 11 men clinging on, though the mood was lifted briefly when Darren McQueen’s introduction injected some much-needed pace up front. Yet the youngster couldn’t quite find the target with a decent effort on 82 minutes that brushed the side netting.

Two minutes later and the Hawks were back in it. A free-kick was bent round the wall by West of all people and settled in the bottom corner with Ashmore unable to even get across to it as it came through the crowded box. Lewis had two late efforts and Deering bent a shot on target that had promise but Munoz flew to his right to scoop it away for another corner and with it went any hope for three points.

Ed Miller has been Ebbsfleet United's communications manager and programme editor since 2014 and responsible for the club website since 2007. Contact him on ed.miller@eufc.co.uk
PrevPreviousThe Hawks are back in town
NextMacca reaction: “We know that wasn’t good enough”Next