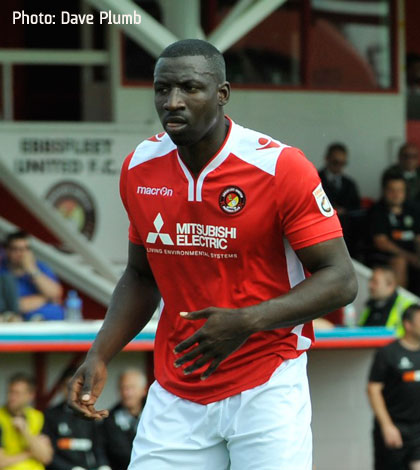 Try as both clubs might to avoid Jamie Day managing his first game against his old side, football has other ideas. A draw between the Fleet and Welling this afternoon means they must do it all over again at Park View Road on Tuesday as the 10-man visitors held on.

Caretaker manager Daryl McMahon installed Shane Huke at left back instead of the suspended Joe Howe, while Dean Rance replaced his temporary boss in midfield. Loanee Sean Shields was named on the bench while Brendan Kiernan passed a fitness test to join him.

Welling had the first decent opportunity on seven minutes when Aristide Bassele made the most of careless midfield play from the Fleet but couldn’t keep his resulting shot on target.

It took Fleet 16 minutes to emerge from their shell, with Billy Bricknell forcing a save from Liechtenstein goalkeeper Benji Buchel and the visitors were brighter early on, a couple of free kicks causing anxiety and their running from positions wide on the right looking dangerous.

Dean Rance had the next chance, heading Chris Sessegnon’s cross just over, while Matt Godden’s two efforts were well blocked by Buchel.

Come the half-hour, come the opening goal, however, and it was one the home fans were enraged about. Tyrone Marsh was clipped just inside the box and the referee – who hadn’t enamoured himself to the Fleet faithful up to that point – made himself even less popular with the award of the spot-kick. Kieron St Aimie kept his strike out of Hall’s reach and Welling, much to their understandable delight, were one up.

Fleet almost handed Welling a second with some errant defending but they were given a lifeline on 40 minutes. Wings academy graduate Joe Taylor leapt in on Rance outside the box and the referee brandished a red card to reduce the visitors to 10 men. Scriptwriters who wanted another twist in the tale would probably have selected Anthony Acheampong to pop up sharpish to claw one back against his old club – and that’s exactly what he did. Anthony Cook swung in the free kick and Acheampong was on hand at the post to fire home the equaliser.

Now it was Welling’s turn to feel the pressure as Fleet had their tails up and desperately tried to force the issue until the half-time whistle intervened.

McMahon gave it 11 minutes of a quiet second period before introducing himself for Matt Johnson and he warmed Buchel’s hands with a typical long-range effort. Fleet bossed the territorial battle as Welling struggled to feed their front players. Yellow cards for Chris Bush and Joe Healy followed, further antagonising the home fans who were growing frustrated and sensing another sending off at the same time.

Cook went close with a header from a Godden cross on 72 minutes and Cook again was involved in what should have been Acheampong’s second when he sent a free-kick the defender’s way four minutes later. It seemed Fleet must surely score as Welling defended every ball for all they were worth but the visitors almost snatched an unlikely winner six minutes from the end when St Aimie broke through and seemed certain to pull the trigger until Kenny Clark saved the day with an excellent challenge.