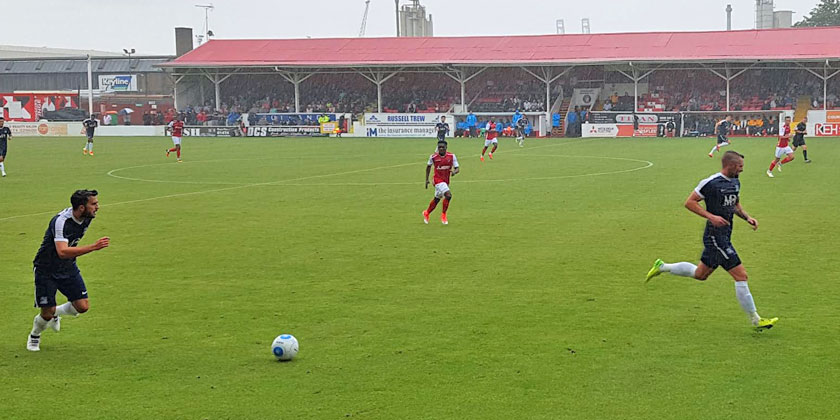 The weather may have been unexpectedly dreadful by summer standards but the Fleet were once again anything but as they clicked into gear after a strong start by their League One opponents and were unfortunate not to hold on for the win after taking the lead shortly after the hour mark.

Daryl McMahon will no doubt again be pleased with the shift his side put in and the workout they were given by a Southend team that contained two players not long out of Premier League football (Ferdinand and Kightly) and another who had graced Euro 2012 (Simon Cox).

This was always likely to be Fleet’s toughest test of pre-season and in the opening minutes, it looked as if it was going to pan out that way as Southend kept the home side penned in their own half. Fleet were forced to defend a couple of corners early on and Sam Magri had to dig the ball out from Kightly as he prepared to shoot, while Dave Winfield got his head to another set piece as the centre backs saw plenty of early action.

Nathan Ashmore also saw more of the ball than in the other friendlies and he had to push away a fine strike from Ryan Leonard on six minutes before getting his legs – and other more sensitive areas – in the way of Theo Robinson’s effort on 11 minutes. Robinson, and Marc-Antoine Fortune, up front for Southend were powerful players but their early threat soon subsided as Fleet got to grips with their opponents and started to knock it around in midfield a little more from the 15-minute mark.

Myles Weston’s cross was headed just over the corner of the bar by Danny Mills before Fleet’s best chance on 26 minutes. A raking pass out wide to Darren McQueen saw the Fleet striker scamper in behind the Southend back line and whip a low cross into the box that Luke Coulson attacked. He made good contact with his shot but Southend goalkeeper Mark Oxley made a fine reaction save from close range to deny the new Fleet signing.

With the rain becoming ever heavier as the half progressed, the game became a little bogged down as the break approached. Fleet could, however, have edged in front four minutes from half-time when McQueen sent Jack Powell’s pass across goal and with Southend flapping, Marvin McCoy sent the ball back McQueen’s way rather than hit the target.

The downpour abated at half-time but only for 15 minutes and as soon as the teams trotted back out, the rain began falling once again. Ashmore was into action within three minutes, tipping Kightly’s quickly taken free-kick over the bar.

It took until the hour for the game to really open up when Weston accelerated beyond John White down the flank to deliver a floating cross on to Mills’ head but though the Fleet striker met it well, his header was off target and back across goal. Powell then launched a free-kick from 30 yards that caught Ferdinand’s head and he glanced it just wide of his own goalkeeper and post.

But Fleet took their next chance on 65 minutes. A ball launched forward was misjudged by Harry Kyprianou who slipped, allowing McQueen to outpace him. The Fleet striker kept the ball away from the covering defenders, rounded Oxley and despite losing his balance, still managed to arrow a shot goalwards and into the empty net.

It was a well-taken goal and Fleet looked comfortable enough to hold on to the lead. But Southend weren’t without their chances and when Cox’s shot rolled beyond Ashmore and on to the post, it seemed Amadou Ba must pounce on the rebound but it ran clear and Jack Connors cleared.

But on 73 minutes, Ba went one better and the goal was mainly of Fleet’s own making. With Connors in an advanced position and looking to play the ball square his lack of options saw him hesitate and Southend capitalised, launching a ball that Ba managed to knock forwards between Magri and the onrushing Ashmore, leaving him with just the simple task of firing it over the line for the equaliser.

Dru Yearwood then rattled a shot off the bar, though it appeared as if Ashmore might have got a touch to it. Fleet finished the game strongly, however, with substitute Sean Shields adding some fresh impetus down the right flank. Seven minutes from the end, Shields played in the overlapping McCoy and his low cross into Mills saw the Southend defence scrambling to clear, which they did eventually as Coulson’s resulting shot cannoned off a defender.

At the other end, the impressive Leonard would have nicked what would arguably have been an undeserved win for the visitors when his header shaved the top of the bar but Fleet survived and all square it ended.

Ed Miller has been Ebbsfleet United's communications manager and programme editor since 2014 and responsible for the club website since 2007. Contact him on ed.miller@eufc.co.uk
PrevPreviousNo Walls Garden project makes a difference
NextHendon 2-3 FleetNext