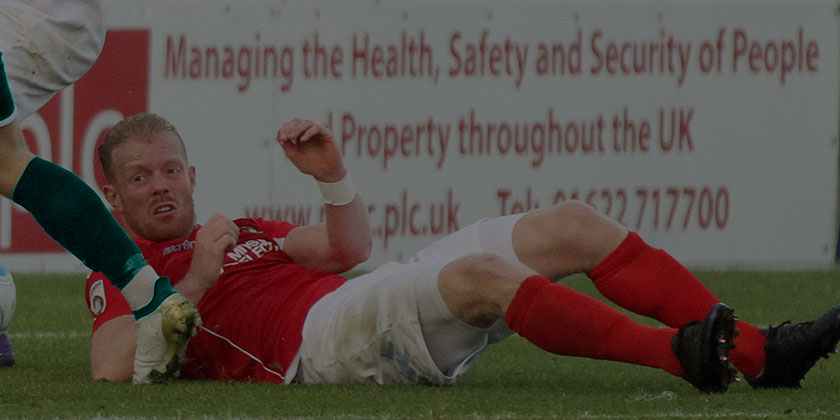 Fleet were undone at the death once again as a rampant second-half performance from the visitors eventually yielded the point that was the least their pressure deserved. Fleet led from the fourth minute and were worth their half-time advantage but with Hampton’s unbeaten away record threatened, the Beavers laid siege to the home side’s penalty area in what Daryl McMahon later said was the worst 45 minutes he’d seen his side play.

It could all have been so different as Fleet – with Bradley Bubb and Jack Connors replacing Darren McQueen and Sam Deering – got off to a dream start. What looked to be a routine clearance on four minutes as Bubb tried to race on to a ball saw Tom Jelley and goalkeeper Billy Bishop get in each other’s way and Bubb pounced on the loose ball. From a wide angle, he still had plenty to do however and rather than cross for Danny Kedwell, he kept his balance to fire it home for 1-0.

For all their attacking reputation, Hampton weren’t at the races for the first half hour and Fleet enjoyed their usual careful build-up across midfield with plenty of balls fed out wide to Anthony Cook. Bishop plucked a Kedwell header out of the air and Dean Rance hit a shot from distance just over the bar as Hampton lived dangerously in defence.

Fleet thought they had a second on 22 minutes when Jack Powell showed great vision to delay a pass then lifted a weighted delivery into Kedwell. His flick-on was met first time by Bubb who drove a shot into the side netting but close enough to draw premature cheers from the home fans.

But the visitors slowly started to gain a foothold in midfield and former Fleet winger Brendan Kiernan finally got a shot away for them, though it was lashed high. Harold Odametey was even higher with his effort before Fleet upped the tempo again. Sean Shields’ searching cross glanced off the crossbar and just behind Kedwell while Rance hit the loose ball above the crossbar. Then moments later from a Powell corner, Mark Phillips hooked the delivery back over his head and it almost fell to Kedwell six yards out but he couldn’t get a powerful enough connection on the ball.

At the other end, a minute before the break, Hampton somehow missed a golden opportunity to equalise. Jack Taylor’s low drive had Ashmore sprawling to keep it out but as the ball was delivered back at height, Ashmore could only get a hand on it, a goalmouth scramble ensued during which Kiernan thudded a shot off the post and Nicke Kabamba somehow planted the loose ball well wide of the target.

If Hampton had warned of their resurgence before the break, it certainly wasn’t heeded in the second half. Fleet’s sum total of opportunities were restricted to a deep Cook cross that just eluded Shields and a decent shot from substitute Deering that Bishop palmed away just over the head of Bubb. The rest of the 45 minutes belonged entirely to the visitors who could and should have scored well before they did but for some wasteful finishing.

For the most part, however, Fleet held them at bay and it made for a scrappy, ragged game that wasn’t helped by the referee’s booking of three home players and plenty of whistle. Kabamba sent a header wide and Jamal Lowe, quiet in the first half, saw one swing off target.

Fleet tried to inject a little impetus with Deering’s introduction on the hour mark but were pushed ever deeper. Ashmore warded off a couple of corners with some confident handling and saved a Taylor effort at the foot of his post. He had to stop another Lowe drive with his legs and on the occasions Fleet did relieve the pressure on him, their passing was wayward.

Hampton did almost get caught on the break when Cook raced the length of the pitch on 79 minutes but Bubb was almost too fast for him as the cross looped behind the Fleet goalscorer and the visitors survived their only real scare.

The equaliser came ever closer as Kiernan’s rasping shot from distance ricocheted off the crossbar four minutes from time but the goal led a charmed life for only a minute more. A corner from the left was delivered low and when Fleet headed it clear, it didn’t go far enough and Lowe was on hand to race on to it and snap a shot through the bodies in the box to preserve his side’s away record.

Hampton could even have won it in time added on as they worked a ball to the right and Clark managed to throw himself in the way of one shot before Kabamba’s wild hook over the bar summed up the visitors’ finishing on the night. Alas for the Fleet, they had found their range three minutes earlier.

Ed Miller has been Ebbsfleet United's communications manager and programme editor since 2014 and responsible for the club website since 2007. Contact him on ed.miller@eufc.co.uk
PrevPreviousCan Fleet bother the Beavers?
NextBoss pulls no punches in Hampton post-mortemNext