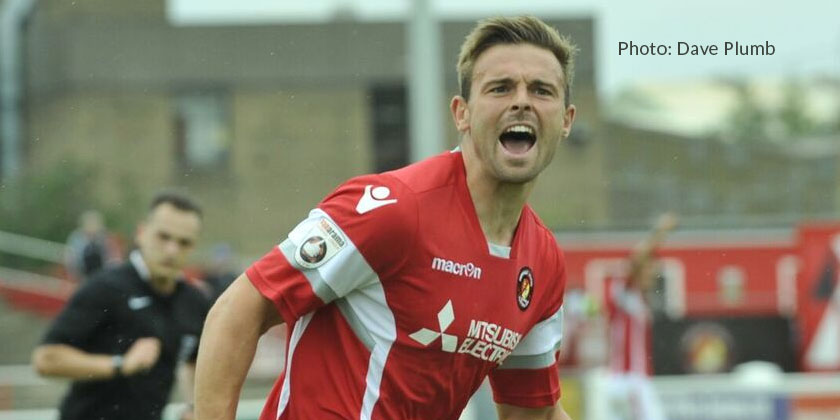 It was honours even in the North Kent derby as Dartford made it 37 years without a league win at Stonebridge Road – but they might well be happier with the point earned than the Fleet. That said, with Maidstone’s defeat and Sutton’s draw, while it was an opportunity missed for the home side, it at least inflicted no further damage on the lead at the top of the table.

Fleet’s line-up was changed considerably from the defeat at Weston, with Joe Howe, Dean Rance, Matt Godden and Aaron McLean all starting at the expense of Bryan van den Bogaert, John Paul Kissock, Sam Deering and Charlie Sheringham while the former Fleet pair of Andy Pugh and Paul Lorraine were not named in the Dartford squad.

Considering what was at stake for both sides, the opening was fairly sedate with both sets of players clearly under instructions to keep a cool head, though Dean Rance’s opening-minute challenge on Lee Noble earned him a talking-to. It took the home side only three minutes to get a sight of the Dartford goal but Danny Kedwell’s shot from Jordan Parkes’ corner needed more power while Anthony Acheampong’s follow-up was blasted high.

That was as good as it got up front for either side until the 21st minute when another Parkes corner cleared the defensive line and reached Godden who headed back across goal but it was just high of the bar.

Too many passes went astray and neither side could bring the ball down in the wind and play it about, resulting in plenty of commitment but little technical football being played. Fleet just about shaded it on chances and saw another go begging when Stuart Lewis’ long-distance effort was cleared behind as Deren Ibrahim flapped at it and rather punched it wide.

It needed some individual brilliance to provide the breakthrough and Matt Godden duly stepped up to the plate on 37 minutes, carving a goal out of nothing. Receiving the ball on the edge of the box, he turned inside and made space despite the attention of defenders to loose off a shot that arrowed into the bottom corner and away from Ibrahim’s despairing drive.

Minutes later Ibrahim had to be alert to another Godden effort, with the Fleet striker stretching first-time to send on McLean’s ball forward but without a proper connection the Dartford goalkeeper had time to get down to it.

Having worked so hard to conjure a goal, the last thing Fleet needed was to be undone in the opening minutes of the second half but that’s what happened as the visitors punished a lack of concentration at the back. The second period was just two minutes old when Dartford advanced down the left and Barry Cogan switched play, skipping over Matt Fish as he fell to the ground. The Darts worked the ball across the pitch to Ryan Hayes in far too much space. Nathan Ashmore was equal to Hayes’ first shot but the ball came back out to the Dartford winger whose second effort flew past Ashmore and into the net.

That signalled a spell with Dartford in the ascendancy and Tom Bradbrook and Barry Cogan weren’t far off connecting with crosses from the right. But it was only a brief threat as Fleet’s urgency to score saw them take the game to the visitors. Sheringham and Sean Shields were introduced on the hour and Shields was lively and positive, creating several chances as he alternated playing on the flank with cutting inside to deliver passes.

The substitutes combined well on 64 minutes, ending with Shields threading a good ball into Godden’s path but the shot was gathered by Ibrahim. Kedwell then got behind the Darts’ back line to deliver an excellent cross into Sheringham but Ibrahim read it well and nabbed the ball ahead of the former Dartford striker.

Godden planted a header wide from a decent Sheringham delivery and sent another one just under Ibrahim’s crossbar but the goalkeeper caught that effort. Dartford were mainly restricted to chances on the break and Rance earned a booking for illegally breaking one of those up, while Cogan fluffed the visitors’ best chance from close range, not connecting well with a pass and allowing Ashmore to save.

Kedwell clipped a post in a goalmouth scramble and there was one final push from the Fleet with a minute left, Shields again probing around the Dartford box and Howe sending a cross in that eventually reached Kedwell at the far post. He seemed to be hauled down as he shaped to shoot and the defenders hacked clear.

That was that as the referee blew for time and Fleet’s must-win game ended all-square, though the necessity of a win was somewhat offset by our rivals dropping points as well. The title race wends its way to Maidenhead where Fleet play Hayes & Yeading next Saturday.

Ed Miller has been Ebbsfleet United's communications manager and programme editor since 2014 and responsible for the club website since 2007. Contact him on ed.miller@eufc.co.uk
PrevPreviousFleet regroup for decisive Dartford derby
NextFleet pursue a finer fluencyNext