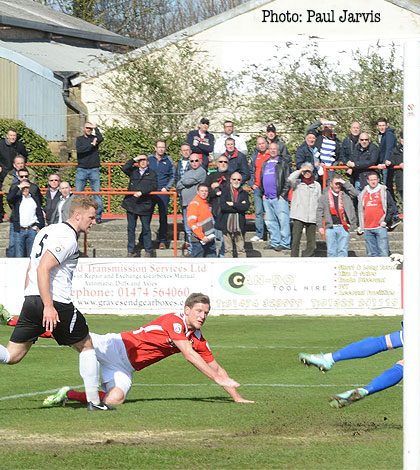 A well-worked Adam Cunnington goal shortly before half-time looked like it was going to be enough to keep Fleet’s season just about alive and kicking until the title-chasing league leaders earned a late penalty and a point that did neither side much good at all.

Jamie Day named an unchanged side for this penultimate home game and in bright sunshine, there was a surprisingly relaxed atmosphere given one team was up for the league title.

Matt Godden was the most energetic outlet for the Fleet and he engaged in an early ongoing battle with left back Ben Herd, while at the other end Tom Bonner and Lee Angol remained antagonistic for much of the first half. But most of the play was in between those players with the visitors patient in their build-up and Fleet happy to keep them at bay and catch them out on the flanks using Godden and Luke Rooney.

It took 27 minutes for anyone to have a shot on goal and even then it was a very tame effort from Danny Kedwell that goalkeeper James Russell gathered easily. Boreham Wood began to just gain a foothold in the middle of the park from that point and Josh Hill planted a header on target on 32 minutes that Brandon Hall had to tip over the crossbar.

But Fleet worked hard and kept the visitors frustrated enough to gain an advantage on 40 minutes. It was a well-worked move, with Kedwell heading a ball out wide to the feet of Godden. He gained a yard of space, got the better of Herd and whipped across a fine delivery that Cunnington met at the far post with a firm header past Russell.

And Day’s side began the second half in a positive frame of mind, Theo Lewis unlucky not to get on the end of an exchange with Kedwell. On 51 minutes, a clever free-kick was worked to the near post and Godden shot across goal before the ball came out to Rooney who curled a shot just past the upright.

As in the first half, Boreham Wood had a brief period where they threatened to dominate the midfield battle but Fleet stood firm and refused to let the visitors dictate the pace. Indeed, for a side desperate for the points, Boreham Wood had little to trouble the Fleet back line which was superbly marshalled by Anthony Acheampong and Bonner.

Their best chance came on 56 minutes when Ricky Shakes was inexplicably allowed time and space in the six-yard box but his point-blank shot was blocked seconds before the offside flag was raised.

Back came the Fleet and they looked more likely to score a second than Boreham Wood did an equaliser. But goalkeeper Russell kept them in it saving three or four efforts, the first on 62 minutes when Rooney and Cunnington combined to open up the defence before laying it wide to Kedwell who drew a shot across goal that Russell palmed behind for a corner.

Ten minutes after that Russell was on hand again, tipping Cunnington’s powerful shot from outside the box just over the bar and 10 minutes from the end he did it again, this time from Kedwell’s header.

Fleet should probably have done better on 83 minutes when a corner was cleared to Scott Thomas but he sent it back into his own box and Bonner rather snatched at the opportunity firing a shot just clear of the post.

The visitors had brought off 22-goal striker Angol and replaced him with Charlie Walker, who had put himself about up front but still his side looked unlikely to score – until four minutes from time. Sam Cox and Graeme Montgomery worked the ball upfield and a cross into the box saw a scramble 10 yards out. Fleet should have cleared their lines and the resulting confusion was always going to result in someone going down and indeed Walker, who appeared to be tripped, duly obliged.

Ben Nunn stepped up to fire a penalty high into the net and the visitors were level. Only then did they really wake up and Junior Morais ran at the Fleet defence a couple of times, before he supplied Walker for a golden opportunity to keep his side in the title race but he blazed it over the bar.

Boreham Wood, at least, should get another chance in the play-offs – Fleet will have to settle for ending the season unbeaten and going into the next on a solid foundation.

Ed Miller has been Ebbsfleet United's communications manager and programme editor since 2014 and responsible for the club website since 2007. Contact him on ed.miller@eufc.co.uk
PrevPreviousTwo teams who need to make a point but can’t settle for one…
NextProgramme Notes 11.04.15Next