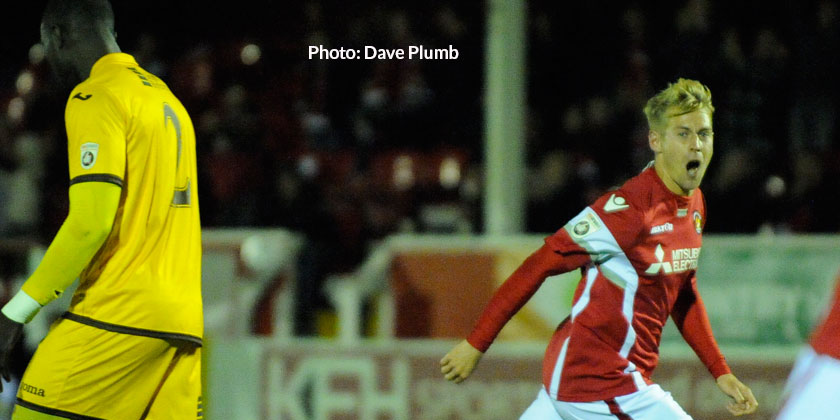 If there’s one thing you can guarantee with the Fleet this season it’s that if you get one half of average entertainment, the other will be full of thrills and spills. And this game was no different after a reasonable first half gave way to a second with plenty of incident.

Jordan Parkes’ scored his seventh goal in nine games, a superb record, to give Fleet the three points, while Brandon Hall saved a late penalty as Fleet took their league record to eight wins.

With one enforced changed, Robbie Willmott replacing the suspended Dean Rance, Fleet’s midfielders had a hard night’s shift ahead of them. It also allowed a space on the bench for Michael West for his first squad appearance of the season.

Sutton made most of the early running but Fleet could have taken a spectacular lead on seven minutes when a high ball into the box was caught by Parkes with an acrobatic leap into the air and his goalbound shot needed a smart save from Ross Worner.

Sutton’s new signing Craig Eastmond let fly from distance and saw his shot come off the crossbar though the offside flag was raised before anybody could reach the rebound.

Gradually Fleet began to play the ball around with more purpose, though Parkes, Stuart Lewis and John Paul Kissock were having to do an awful lot of work inside their own half. A cleverly worked free-kick on 23 minutes saw Parkes float a pass to the back post where Matt Godden had snuck in unnoticed but his header was blocked in the six-yard box.

Worner then saved well from a Lewis shot after a decent pass and move spell around the box by the Fleet before Danny Kedwell did finally beat the keeper but the goal was ruled out for offside.

Both sides raised the pace in the final five minutes of the half and a few unpunished fouls, including  the suggestion of an elbow on Kedwell, turned the noise levels up on the terraces.

Expecting more from their side in the second half, the Fleet fans were duly rewarded inside 11 minutes. Parkes saw one pacy low drive whistle past the post before he made sure with his next effort. It arrived courtesy of Lewis’ surge from midfield and he found Kissock on the angle of the penalty area. Instead of the expected cross, the former Whitehawk man cut inside with the defender backing off and squared the ball to Parkes who belted it past Worner in his now accustomed style.

Kedwell and Godden began to really click and the former’s flick-ons around the box were causing Sutton a fair measure of grief. West entered the fray for Robbie Willmott while Danny Haynes replaced Godden a short time later.

But it was Sutton substitute Ross Stearn who could have scored when Matt Fish’s under-powered header failed to clear Fleet lines and Stearn pounced on it to send a shot just past the post.

Kenny Clark directed a Parkes corner just off target as Fleet continued to threaten but the last five minutes were all Sutton’s. The Us forced a succession of corners that Fleet dealt with and as the last one cleared the goal and headed for the far post, Kevin Amankwaah went to ground and the referee pointed to the spot to the disbelief of a fair proportion of Stonebridge Road.

Craig Dundas stepped up, fired it to Hall’s right but the Fleet goalkeeper pushed it onto the post and it was cleared behind for a corner. In the ensuing melee, Fish went to ground after Bedsente Gomis raised an arm and the Sutton player received a red card for his sins.

Unlike against Whitehawk, Fleet’s concentration after the penalty save remained intact and they cleared the resulting corner to record a hard-fought and exhilarating win given the circumstances late in the game.

Ed Miller has been Ebbsfleet United's communications manager and programme editor since 2014 and responsible for the club website since 2007. Contact him on ed.miller@eufc.co.uk
PrevPreviousHall celebrates an anniversary of sorts
NextBe there for BBQ and Bounds-beating!Next