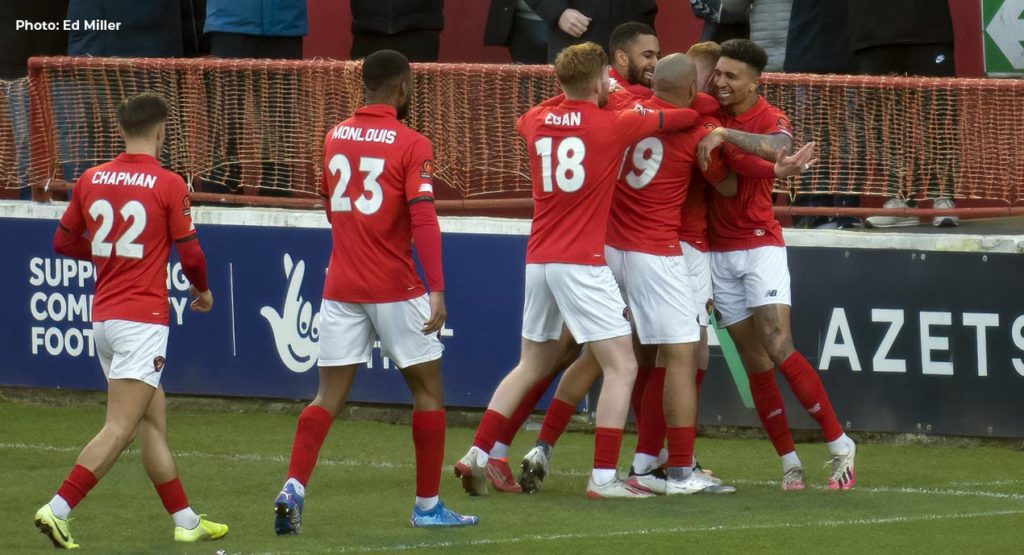 Fleet returned to winning ways as a fantastic Will Wood strike midway through the second-half secured the three points that were paramount above all else at the Kuflink Stadium this afternoon. Throw in a clean sheet and even the luxury of a penalty saved by the toes of Alan Julian and it was no more than the home side deserved.

Hampton set up with a strong defensive line and Fleet looked set to breach that early on but it ended up as a lesson in patience for the hosts until Wood provided the eye-catching finish to win the game and continue the recent sequence of home wins between these two sides.

There were five changes for Dennis Kutrieb’s side, with Kieran Monlouis deployed just behind Elliott Romain. Joining him in the starting lineup were Ben Chapman, Christian N’Guessan, Alfie Egan and Will Wood.

And it was Monlouis who almost got off to a dream start following Hampton’s opening attack and shot saved inside the first minute. Romain’s deft touch let Monlouis through and he took the ball around one defender before seeing his effort blocked by Ruaridh Donaldson.

Fleet took that encouragement to continue to come forward and a patient spell of approach play on four minutes ended up with Tobi Adebayo-Rowling sending a shot to the right of Alan Julian’s post.

It seemed Fleet would continue to enjoy things their way but Hampton posted a warning as the 10-minute mark passed when on-loan AFC Wimbledon striker Zach Robinson held the ball before running at the Fleet defence and zipping a useful effort across goal that skipped wide of the far post.

Traffic was mainly headed in the direction of the Swanscombe End, however, as Fleet pressed the visitors’ goal. Monlouis was at the heart of the next move as Fleet pinged the ball about from the middle to the left flank, before the No.23 switched play inside to Romain who loosed off a useful drive that had Julian stretching but ended up over the bar.

Moments later a strong run into the box by Wood carved a path towards the six-yard box and he stabbed a shot on target that Julian just about diverted high across his own goalmouth.

Next to liven up the home fans was a counterattack on the quarter-hour, Egan running with the ball upfield and finding Cundle – he was shoulder-charged inside the box by Tommy Block but half-hearted appeals for a penalty were waved aside.

After that opening 15-minute spell, however, the tempo fell a little and Hampton became increasingly difficult to expose despite Fleet continuing to stroke the ball about as they probed for an opening. And it was another 15 minutes before the next opportunity on goal when Adebayo-Rowling’s cross found Romain but it was overhit and the Fleet striker could do little more than glance it away from goal.

A somewhat more vociferous penalty claim followed on 32 minutes when Cundle squeezed in between Julian and Tommy Block and was closed down by both but there was little in it and again the referee – who let the game flow well throughout the 90 minutes – was not impressed.

Fleet did get their penalty three minutes later, however, when Cundle’s corner to Romain was blocked by the arm of Donaldson. It was Cundle who assumed the responsibility in the absence of the injured Rakish Bingham and he hit a firm mid-height drive down the middle, sending Julian the wrong way but the goalkeeper somehow managed to get a boot to the ball to send it spinning away from goal.

Chris Haigh didn’t have much to worry about between the Fleet posts and the best Hampton could muster was a shot from outside the box by Tyrell Miller-Rodney that he pulled wide. The half ended with a final good chance for the Fleet in time added on when Chris Solly’s ball forward was lifted over Julian by the advancing Romain but there was a little too much power on it and it drifted off as Hampton got men back on the line.

Romain started the second half as he’d ended the first, finding half a yard of space a minute after the break to try his luck with a turn and shot across goal but couldn’t quite keep that on target from 10 yards. Two minutes later, Egan’s neat turn to lose his man released a ball into the box that Romain might have touched home from eight yards but again it lacked a clean connection.

The breakthrough came on 56 minutes for the Fleet as Egan pushed a ball wide to the right flank for Wood. The Fleet’s No.16 dropped a shoulder and ran straight across the pitch until he reached the halfway point before sending a glorious shot from 25 yards arcing around Julian and into the net.

It was a strike worthy of winning a match and Fleet did their level best to do just that in the 35 minutes remaining. Just past the hour mark, Wood was determined to protect his own strike as he put enough pressure on Robinson’s swift break from the halfway line to ensure red shirts got back to block the path to goal.

Hampton took advantage of another loose ball in midfield three minutes later as wide man Brandon Barzey found Robinson and he raced through with only Solly to beat. Twisting and turning, he got his shot away but Haigh was well behind it.

Back came the Fleet and substitute Lee Martin sidefooted Cundle’s low delivery first-time that rose over Julian but glanced off the crossbar.

Hampton had two more half-chances that Haigh showed little bother in scooping to safety while the Fleet applied some late pressure, Cundle’s shot saved by Julian before Dominic Poleon flicked on a header that he ran on to himself but couldn’t quite beat the goalkeeper.

Fleet rarely looked like surrendering the lead, however, and go into Tuesday’s Dartford game with three points and a clean sheet behind them.

Ed Miller has been Ebbsfleet United's communications manager and programme editor since 2014 and responsible for the club website since 2007. Contact him on ed.miller@eufc.co.uk
PrevPreviousTwin branding project gives Fleet outstanding visibility
Next“Everyone who came in did a job”Next