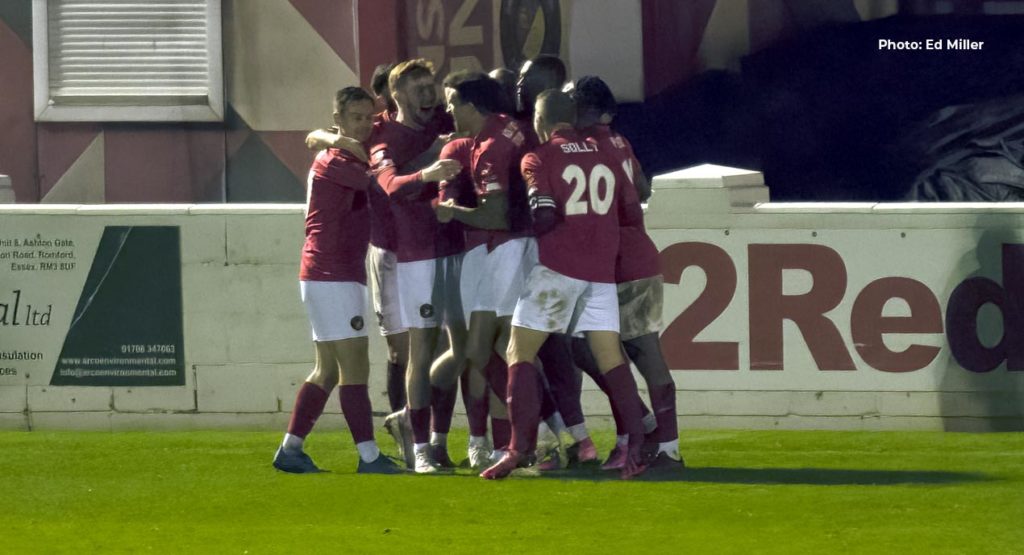 The Fleet protected their 42-year unbeaten league run at home to Dartford but more importantly for the short-term, Ben Chapman’s late goal handed Dennis Kutrieb’s side a potentially crucial three points as the red contingent among the 2,566 crowd took the bragging rights from this New Year North Kent derby.

Chapman’s 85th minute strike was no more than the Fleet deserved, although Dartford will feel that the chances they missed tipped the balance the home side’s way as the scoreline matched the last game between the two clubs at the Kuflink Stadium five years ago.

One of the Fleet participants that day, Andy Drury, turned up alongside manager Steve King on the Dartford bench as the visitors made a number of changes from their 2-2 draw earlier in the week at Braintree Town.

Kutrieb, by contrast, made fewer alterations to his side, Tobi Adeyabyo-Rowling returning from suspension while Craig Tanner and Dominic Poleon also started, in place of Adam Mekki, Alfie Egan and the eventual match winner Chapman.

With both sides seeking an improvement on Tuesday’s results, it was a typically guarded opening though Fleet were the more positive of the two sides until the Darts found their feet as the first period progressed. Tanner’s disguised pass on seven minutes was dummied to allow Rakish Bingham to turn and shoot on 7 minutes before Poleon’s strong and energetic run upfield produced an effort into the side netting on the quarter-hour.

Dartford’s threat was more than nullified by some excellent tackling, particularly by Sefa Kahraman, who produced defensive steel and forward movement in equal measure. Chances, however, were at a premium, with Fleet’s next decent effort coming when a short corner eventually found Bingham, whose firm shot was held by Dan Wilks on 17 minutes.

There followed a long period of stalemate, though with Fleet edging the possession, Christian N’Guessan holding things together in midfield and Jack Paxman looking to unlock something that might give his side the edge.

It was Tanner, however, who might have done that on 36 minutes when he produced a clever exchange of passes before spotting Greg Cundle on the left of the box and with a weighted pass, Cundle was able to find space but his downward header lacked power.

Bingham shot wide from another corner on 39 minutes and Cundle’s effort was skewed behind Wilks’ goal by Connor Essam but it wasn’t one-way traffic as Dartford grew into the game and applied some pressure of their own late on in the half.

Indeed they twice had the better chances to score as the half closed out. First, Jake Robinson’s run and cross was deceptive for Chris Haigh who committed himself to his right side and it took Sido Jombati to mop up on the line and clear. Then moments later, the visitors broke quickly through new boy Kalvin Kalala – his ball across field to Robinson found the former Billericay man in lots of space but he opened up his body and sent a shot wide of the far post.

Chapman was introduced for Jombati at half-time but the second-half saw even fewer chances created by both sides, though again Fleet enjoyed much more possession.

Dartford hit a free-kick from a good position wide early on before Bingham and Poleon – attacking the Swanscombe End – played a neat one-two to release Cundle and he shaped to shoot before being denied by an excellent tackle from behind by Essam.

A Dartford double substitution almost produced an opening for them just before the hour mark, Jernane Meade squeezing a ball through from the byline to replacement Dan Roberts but he lifted a shot over the bar from a great position.

Fleet’s chances were restricted to a Tanner free-kick sent well over after a handball on the edge of the box and then a better effort as Adebayo-Rowling attacked downt he right to get some space to supply Chapman. His clever back-heel outfoxed the most immediate defenders but skipped through the box without a crucial touch.

Adebayo-Rowling tried his luck again moments later but that one was cut out for a corner before Azeez ran through at the other end and clashed with Chris Haigh on the edge of the box but any Dartford appeals for a penalty were cut out by the assistant referee’s flag.

It became increasingly end to end as the final minutes approached though neither goalkeeper was overly exerted as both sides expended huge energy. Substitute Alfie Egan sped upfield on the counterattack to supply Bingham and his run towards goal and shot was on target but Wilks got down well to keep it out.

Tyrique Hyde’s effort for the visitors bent wide before the crucial breakthrough came for the Fleet five minutes from the end. Adebayo-Rowling was the architect from the right wing and as he shaped to shoot he instead tucked a ball ahead where Chapman, further forward as a result of his manager’s exhortations, was able to catch it sweetly to shoot across goal and in.

Dartford mounted an expected comeback but Fleet defended with resolve, a superb tackle in the box eventually releasing Poleon on the break and though he was fouled as he skipped forward, the referee played an advantage as the Darts cut out the danger.

Poleon might have added a second after that chance – Egan performed some sterling work in closing down another Darts attack before Fleet’s No.14 produced a headed interception to again get away on the break, taking the ball wide of the final defender but he ended up pulling his opportunity wide of the near post.

But with the four minutes of added time producing no real headaches for the home side, that miss mattered little in the buoyant post-match atmosphere that enveloped the Kuflink Stadium on this first matchday of 2022.

Ed Miller has been Ebbsfleet United's communications manager and programme editor since 2014 and responsible for the club website since 2007. Contact him on ed.miller@eufc.co.uk
PrevPreviousPreview: should auld acquaintance be forgot
Next“We wanted to achieve for the fans”Next