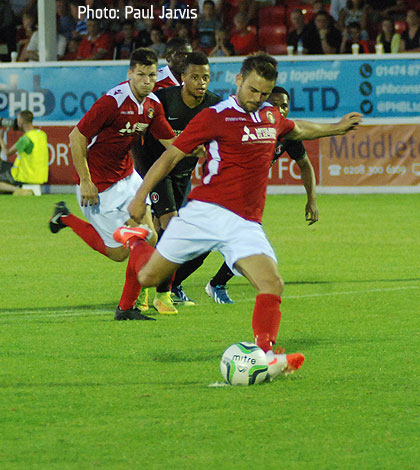 An impressive Fleet side maintained their 100% record in pre-season as a Matt Godden penalty proved the difference between the home side and Bob Peeters’ Charlton Athletic in front of a crowd of 1,416.

Fleet were good value for the win even though they spent much of the first 45 minutes in their own half, defending well against a Charlton side that, for all their approach play, lacked a cutting edge. And Godden’s second-half penalty was just reward for a more adventurous policy from the Fleet in the latter period as they contained and then took the game to their opponents.

And it was Church who was at the heart of much of the Addicks’ forward play as he ran at the Fleet defence early on, but his first two chances were off target. Tucudean proved a handful but was understandably slightly off the pace and on the occasions he did threaten, shots were again off target.

Kenny Clark led the back line resolutely and he made one very impressive stop inside the box to prevent Chruch getting a shot away, while minutes later Howe performed equally well as Jack Munns loomed large in the six-yard box.

And when the Addicks did breach the Fleet defence, Hall was on hand, acrobatically tipping Jordan Cousins’ goalbound shot over the bar. Not that the visitors’ edge overwhelmed the Fleet. Far from it, the home side defended well and played the ball around nicely, Fraser catching the eye early on with a number of passes sprayed wide to Osborn.

Godden saw a long-distance header fly wide of the post and Charlie Sheringham twice tried his luck inside the box as Fleet showed glimpses of what was to come in the second half.

The second half benefitted from a lack of wholesale substitutions early on which allowed the game to flow for a while longer and Fleet picked up the pace from the whistle. Sheringham and Godden played a wonderful interchange on the edge of the box that saw the latter upended on the line but the free-kick was wasted. And minutes later Godden struck a fine shot that Terell Thomas kept out with an important lunge.

The visitors were less ambitious going forward but still forced Hall into two low saves to his right before the crucial incident arrived on 74 minutes. Like the Godden incident before it, the foul occurred on the edge of the box – a trip on Daryl McMahon – but this time the referee decided it was inside the area. Up stepped Godden to confidently blast Fleet’s second penalty of pre-season well beyond goalkeeper Dillon Phillips.

There was time for Lloyd Harrington to make an appearance as substitute – the Dover defender/midfielder having missed much of last season ironically after sustaining an injury against the Fleet at Crabble in our league clash. Cook also got a little time to show what he can do and sent a late free-kick just past the upright.

Up next, it’s Portsmouth on Saturday in another mouth-watering friendly for the Fleet as we edge towards the new Conference South season.

Ed Miller has been Ebbsfleet United's communications manager and programme editor since 2014 and responsible for the club website since 2007. Contact him on ed.miller@eufc.co.uk
PrevPreviousBuy your Mini tickets as new season approaches
NextHarrington hoves into viewNext