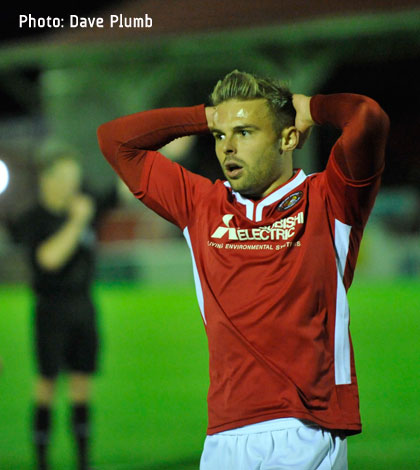 Form team Gosport leapfrogged Fleet into third place after steamrollering the home side in a calamitous second-half in which they scored three times. Gosport’s mercurial record on the road certainly suggested they were capable of such a result, but after a goalless first-half, Fleet never saw Boro’s improved performance coming.

Fleet were unchanged from Saturday’s draw at Eastbourne and kicked off in pouring rain. The conditions, coupled with the two meanest defences in the league, meant there was little excitement in the opening stages. Gosport’s prolific front pair of Justin Bennett and Matt Paterson carved out an early break, but Shane Huke’s challenge on the latter was well-timed.

At the other end, Fleet were knocking it around well in the final third, with Anthony Cook and Matt Godden keeping the well-organised Gosport back line on their toes but goalkeeper Nathan Ashmore had little to do.

Fleet’s first sight of goal arrived on 12 minutes when Godden wheeled through 180 degrees and fired off a shot but it was straight at Ashmore. Ten minutes after that, Kiernan tumbled as he made to cut inside on the left but the referee waved away vociferous appeals for a penalty. Huke sent a header into the goalkeeper’s arms from close range as Fleet continued to press Gosport but without causing them any real bother.

In the final five minutes of the first half, Fleet upped things again. Cook shimmied his way into the box and around two defenders but his shot was saved at the foot of the post by Ashmore. Charlie Sheringham sent a dipping effort just over the upright from 20 yards and then Kiernan cut back a ball into the path of Dean Rance but he shot narrowly wide in the best chance of the game to that point.

Gosport hadn’t shown an awful lot of ambition up to that point but keeping the Fleet at bay early on was clearly their gameplan as they picked off the home side in a much more fluid second half from their point of view.

Aiden Palmer replaced Kiernan at half-time, with Sessegnon moving to the right wing and Joe Howe switching back across to the right of defence, but it was the visitors who came closest to scoring as the second half began. Paterson won a free-kick on the edge of the box on 49 minutes and Bennett arrowed a shot that smacked off the crossbar and bounced to safety.

Gosport kept probing and on 56 minutes, Mike Carter and Bennett created a decent opportunity down the left flank, Bennett advancing to the byline and playing in Paterson, who forced Hall into a save.

Five minutes later and the visitors were ahead through a defensive misfortune from the Fleet. A free-kick was floated over to the far post and Hall couldn’t quite gather it, letting the ball drop into the path of Bennett who had the simplest task to slot it home for 1-0.

Fleet’s search for an equaliser almost paid off with Kenny Clark’s header cleared to the feet of Godden whose shot was parried by Ashmore. But Gosport needed only another eight minutes to effectively wrap things up. A neat buildup around the box saw the ball played to Carter 25 yards out on the left. He had a meagre sight of goal but found a gap wide enough to send a shot through a crowd and into the bottom corner, far out of Hall’s reach.

The home side just couldn’t respond, despite the introduction of Billy Bricknell as a third striker, and it got worse on 80 minutes when Bennett raced into the box and evading the Fleet defence, sent a low cross along the six-yard box where the onrushing Dan Wooden had plenty of time to pick his spot and fire into an open goal.

Fleet will need to regroup and do so quickly as teams with games in hand will be eyeing those play-off positions hungrily – and the impending FA Trophy fixture might actually be a welcome distraction.

Ed Miller has been Ebbsfleet United's communications manager and programme editor since 2014 and responsible for the club website since 2007. Contact him on ed.miller@eufc.co.uk
PrevPreviousAcademy game switched to Thamesmead
NextClub statementNext