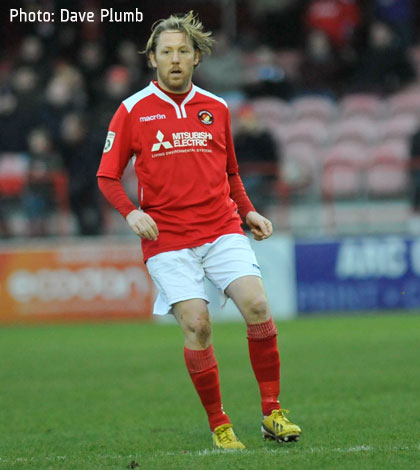 The new year dawned much as its predecessor had for the Fleet – with a home defeat and a widening gap opening up at the top of the table. For Fleet fans, it was another lifeless display in a stretch of home defeats that will leave Jamie Day with more questions than answers about personnel in his squad.

A reshaped line-up saw the manager select himself for the first time, while Alex Osborn started up front and Dean Pooley in defence. Billy Bricknell dropped to the bench, as did Sean Shields while there was no place for Shane Huke in the squad.

A very nondescript first half was just about edged by the Fleet whose first effort of note was an Anthony Cook shot that flashed wide before Daryl McMahon’s delivery and Anthony Acheampong’s back header forced Bradley Watkins into a save.

Chelmsford slowly got going from the 20-minute point and Joe Howe and Kenny Clark had to be alert to the pace and trickery of Jaanai Gordon who twice threatened to get a clear run on Brandon Hall’s goal. Dean Pooley and Acheampong also had to clear from Rohdell Gordon and Michael Cheek respectively as the visitors threatened to gain the upper hand.

But Fleet weathered that storm and returned with a great shot from distance by Matt Johnson that Watkins palmed away and a minute later McMahon curled a speculative effort just wide of the far post. And the home side should have opened the scoring just before half-time when the ball fell to Tyrone Marsh in the box but his first shot was blocked and his follow-up effort was stopped by the goalkeeper while he was lying on the ground.

Fleet were made to rue that miss in first-half stoppage time when Kenny Clark conceded a free-kick wide on the Fleet left. The kick was taken some yards inside where the offence occurred but it was poorly defended as Leon Redwood sent in a low cross and Cheek was allowed to stab it home from close range at the far post.

As has become a pattern, the second-half performance from the Fleet left much to be desired with Chelmsford’s back line rarely threatened in any meaningful way. It took until the hour for the home side to register a shot when Osborn saw his effort tipped round the post by Watkins. But Chelmsford were pressing and Clark was almost forced into an error from a free-kick as his powerful header almost went straight into his own net but Hall made a good save.

And the Fleet goalkeeper was in action again moments later when he made an excellent stop from Jaanai Gordon who sent in a point-blank shot from eight yards. But Gordon made no mistake moments later. A 78th minute free-kick from Rohdell Gordon allowed his namesake to get up at the far post and head the game beyond Fleet’s reach.

That was it and Fleet mustered nothing more to allow Chelmsford to climb above them in the table while falling to eighth – the lowest league position since September.

Ed Miller has been Ebbsfleet United's communications manager and programme editor since 2014 and responsible for the club website since 2007. Contact him on ed.miller@eufc.co.uk
PrevPreviousSess on season-long loan to Sutton
NextBoreham Wood 1-3 FleetNext