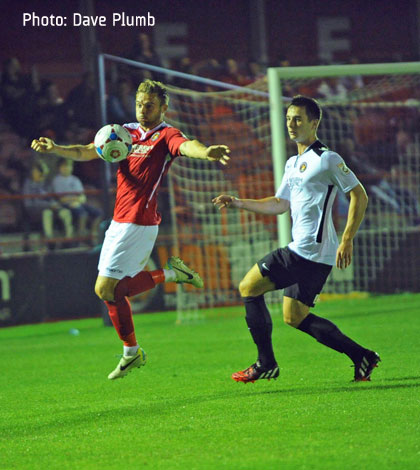 Fleet’s hold on the Kent Reliance Senior Cup slipped at the first hurdle as Charlton’s England U17 striker Karlan Ahearne-Grant proved the difference with a swift two-goal burst early in the second half.

The visitors took to the field in Fleet’s white away shirts as their own black change strip clashed with the referee’s which caused many among the 377 crowd to do a double-take. They exhibited a nice passing game from the back as they edged the possession statistics but neither defence was particularly troubled.

Anthony Cook soon got into his stride and stretched the Charlton defence with two trademark runs while Sanderson fizzed a low shot just wide of the post. However, it wasn’t much of a spectacle, though Fleet went close a couple more times. Dean Rance drew a save from Dimitar Mitov from close range but without real intent in the shot while Godden went one better on 32 minutes, beating the keeper in a one-on-one but Mitov got enough of his hand on the ball to check its pace and Harry Lennon was able to clear off the line.

The visitors’ goalkeeper was in good form and he kept out Cook’s arcing shot, though minutes later sent a wayward clearance straight at the Fleet winger who couldn’t bring it under control quick enough to get a shot away and the Charlton defence cleared.

Rance had one more effort before half-time, planting Cook’s corner wide of the post with a close-range header that he perhaps should have got on target.

Fleet may have held the edge at half-time, with Charlton’s play in the final third almost non-existent, but that all changed after the break. Within six minutes the visitors got their noses in front. Hall didn’t quite gather Zak Ansah’s effort and as the Fleet defence scrambled to clear, Ahearne-Grant sidestepped the bodies in his way and arrowed a shot into the far bottom corner.

Cook almost responded straight away, powering Godden’s pass goalwards but Mitov again was alert to the threat and within four minutes, Ahearne-Grant made it 2-0. Ollie Muldoon hoisted a ball forward and the Charlton striker brought it down, flicked it past Palmer and then coolly fired it beyond Hall.

Rance headed over from eight yards but was always off-balance while Sessegnon and substitute Joe Howe exchanged passes with Howe surging into the box but he was denied by a well-timed challenge. At the other end, Hall was almost caught out by a drive from Jack Munns that threatened to deceive the Fleet keeper as it seemed the home side’s grip on their trophy was slipping.

Charlie Sheringham’s introduction, along with tall, powerful youth player Shilow Tracey, gave Fleet a physical present up front that upset the Addicks defence but it was too little too late. Mitov saved a strong drive from Johnson before Sheringham’s effort seemed certain to cross the line but the keeper diverted it away from the post and Tracey couldn’t quite gather the loose ball as Fleet bowed out of the competition they won in May.

Ed Miller has been Ebbsfleet United's communications manager and programme editor since 2014 and responsible for the club website since 2007. Contact him on ed.miller@eufc.co.uk
PrevPreviousPooley eyes second promotion on return
NextBest wishes to youth player GeorgeNext