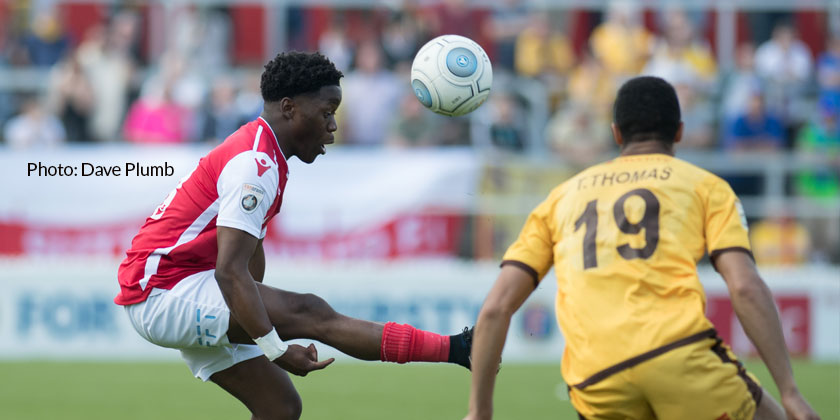 Sutton waited for their first win on Fleet home soil for when they arguably needed it most as they ended their own poor run and the home side’s 11-game unbeaten streak. In so doing it confirmed their own place in the end-of-season play-offs and meant Fleet will have to rely on their game in hand on Tuesday to seize the advantage once more. That comes at Gateshead where a win would lift Fleet into fifth place with a trip to relegated Torquay on Saturday.

With the club’s Community Day in full swing, Fleet recorded their largest home league attendance for many a year and in bright sunshine, the Kuflink Stadium was rocking before kick-off. Daryl McMahon made one change to his side, Jack Powell replacing Luke Coulson.

Having called his side’s performance at Maidenhead in midweek “a shambles”, Paul Doswell made five changes to his lineup and they responded well, eager to get at Fleet’s back four from the off. Tom Bolarinwa tested Chris Bush inside the opening minutes, running at him with pace, while on the the other flank Kieron Cadogan enjoyed room to attack but he overhit his final ball.

Seven minutes in, another Sutton attack saw Fleet’s defence opened up by a slip inside the box and top scorer Tommy Wright pounced to send a shot off the side of the post with Nathan Ashmore’s chest taking some of the pace off the ball as well.  Three minutes later, a Sutton corner just scraped the top of Bolarinwa’s head inside the six-yard box and there was more edgy play in the Fleet area when Kenny Clark slipped trying to clear.

Corey Whitely got the first shot on goal at the other end but it failed to trouble Jamie Butler before Chris Bush’s tricky run to the edge of the Sutton box resulted in a foul and Powell curled a decent effort just wide of the upright from the resulting free kick.

Play switched to the other end once more on 22 minutes and Cadogan was left free to the right of the box from a corner to get his foot to a ball that Ashmore had to parry with his wrist before Fleet managed to clear. Eight minutes later and Fleet’s newly crowned player of the year was in action again when he scooped Josh Taylor’s shot from distance high into the air and collected on his line as the ball came down but it ran loose and defenders had to hastily mop up the trouble.

Fleet managed to stem the Sutton tide from the half-hour point and Whitely’s low delivery from wide on the right was dangerous, forcing Jamie Collins to fire a clearance over his own bar from eight yards. Whitely had a couple of half chances to work Butler before Bolarinwa had a fantastic chance to put Sutton ahead, springing the offside trap to chase a long ball but Ashmore just about did enough inside his box to halt the winger in his tracks. That was the action over with in the first-half except for a late injury to Sean Shields. The winger was felled by Louis John further up the pitch and a minute later fell to the floor and had to be helped off on the stroke of half-time, with the outlook for the fans’ favourite not positive. 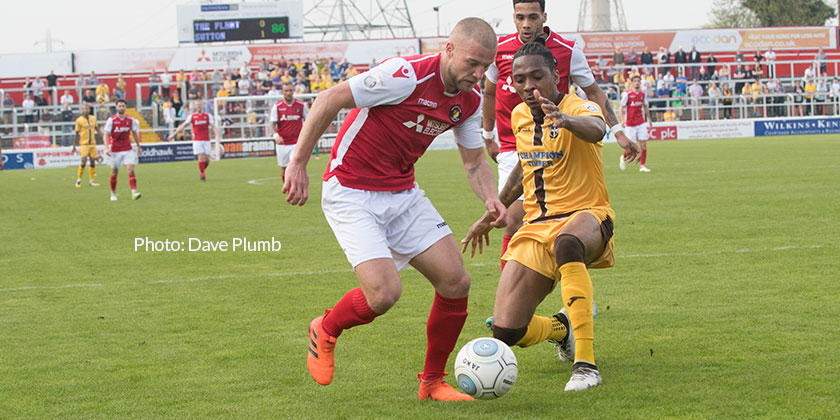 Fleet were forced into another change as the second half began, Coulson replacing an ill Andy Drury who had not quite shaken off the effects of a complaint earlier in the week. The game continued where the first-half had ended, with few quality balls into the strikers and play broken up in an untidy midfield battle.

On 52 minutes, Clark managed to outmuscle Wright as both chased down a ball before Ashmore needed to intervene. Fleet then enjoyed their best period of play approaching the hour mark but it was too little to fully trouble the Sutton back line, ending with a Coulson drive into Butler’s arms. Lawrie Wilson cut out a run into the box by Aswad Thomas and Danny Kedwell had to clear Fleet’s lines as Sutton refused to allow the home side any space in which to mount an attack. Sutton introduced striker Ross Lafayette on 76 minutes, Doswell sensing he could perhaps put Fleet’s defence under more acute pressure but even he couldn’t have dreamed they’d take the lead a minute later.

It came down the left, the dangerous Bolarinwa getting away from Wilson, riding another challenge before having just enough momentum to steer his shot beyond Ashmore as Fleet’s centre backs raced to close him down.

Sutton didn’t look likely to cave in during the final 10 minutes and substitute Norman Wabo’s ball for Coulson to run onto and cross into the six-yard box was as close as Fleet came. The visitors might have added to their lead had Ashmore not eventually gathered at the feet of Lafayette and Harry Beautyman’s shot been a couple of inches the other side of the post. Ashmore came up for one last set piece and Fleet had a couple of efforts blocked in the box but the U’s held firm to take their first ever three points away from Stonebridge Road.