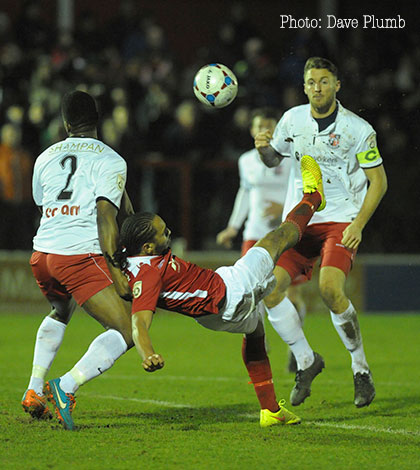 Fleet were left to rue a defensive lapse as Bromley closed in on automatic promotion with the only goal of the game on 58 minutes proving the difference in front of Stonebridge Road’s largest crowd of the season. The result leaves Fleet ninth in the table and with an awful lot of ground to make up on teams in and around the play-off zone.

Kenny Clark earned a recall, as did Sean Shields and Brendan Kieran, with Dean Pooley and Matt Johnson dropping to the bench and Tyrone Marsh out altogether with a hamstring injury, yet another to add to Fleet’s long list of injuries.

Danny Kedwell launched the first attack of the game, lashing a shot over as the ball was cleared out towards him, while Bromley forced a couple of early corners to keep Fleet on their toes. It was a pacy yet cagey opening by both sides though referee Michael George set his stall out early with the booking of Kenny Clark for a fairly innocuous challenge.

Bromley gradually turned the screw, playing much of the game in the Fleet half and Louis Dennis fizzed a shot over the bar as they looked to force the home side into a full retreat. That said, neither goalkeeper was employed to do much, with clearcut chances at a premium.

Once more it was Sean Shields who was involved in the best of what Fleet had to offer, first launching a long cross to the far wing for Kieran to collect but his shot at Alan Julian was far too weak to be effective. Minutes later, Shields again was on the front foot, bursting into the box and loosing off a shot that was blocked in the six-yard box after Kedwell had attempted an overhead kick.

Bromley had the last chance of the half, Bradley Goldberg afforded too much space, turning inside Clark and sending a low shot across goal and wide.

The second half continued in much the same vein, with neither side creating anything particularly noteworthy. Indeed such was the paucity of decent opportunities at goal that it took a mistake to present Bromley with one. Clark attempted to clear across his own box from the right-back position but succeeded only in landing the ball at the feet of Reece Prestedge. He reacted quickly, 15 yards out, to fire a low shot out of Edwards’ reach and suddenly Bromley had the crucial goal in a game where goals were clearly not going to be plentiful.

With Kedwell having to retreat into midfield to grasp possession for the Fleet, it wasn’t much of a task for Rob Swaine and his defenders to mop up the home side’s response. With a raft of baffling decisions and bookings from referee George succeeding only in frustrating home fans and players, Bromley were able to see time out without much anxiety.

Kiernan had a couple half chances but in reality Fleet lacked fluidity and couldn’t conjure up anything out of the ordinary enough to test Julian. And with a casualty list such as it is, Jamie Day would have struggled to change things with the replacements he had available and the subs’ bench remained undisturbed.

Ed Miller has been Ebbsfleet United's communications manager and programme editor since 2014 and responsible for the club website since 2007. Contact him on ed.miller@eufc.co.uk
PrevPreviousCook and May return for crunch clash
NextFleet condemn trouble-makersNext