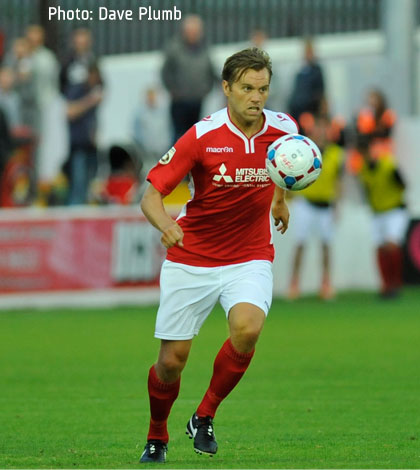 Wealdstone earned their fourth draw of the season, and Fleet their first, as an incident-packed closing period to the first-half dictated the remainder of the game. Daryl McMahon’s red card, followed immediately afterwards by Matt Godden’s missed penalty, meant 10-man Fleet were left to balance their need to earn three points with the desire to protect one during the second 45 minutes.

There was only one change for the home side at a sodden PHB Stadium, with Joe Howe in for Aiden Palmer. The weather conditions made for a particularly lacklustre spectacle with very little of note from either side in the opening spells.

Fleet’s best opportunity was a Kenny Clark header from a corner midway through the half but there was a general lack of fluency from one end of the pitch to the other and it meant chances were at a premium for both sides. Godden fired wide after goalkeeper Jonathan North had misjudged a clearance while Charlie Sheringham didn’t quite read a delivery from Anthony Cook when it looked Fleet might have breached the Stones defence.

But on 36 minutes came the turning point of the game. McMahon slid in on Watford loanee Luke O’Nien as both went for a 50/50 ball but the referee deemed the Fleet skipper’s challenge dangerous and immediately reached for a red card to ardent protests from home fans.

Six minutes later, with Fleet deploying a hastily remedied tactical lineup, they could have seized the opportunity to win the match – or at least put themselves in a more comfortable position. O’Nien was involved again, clearly bringing Cook down inside the box and Godden – after discussion with Sheringham – eventually took the penalty only to see North dive low to thwart him.

With Fleet lining up across the middle using the unfamiliar four of Godden, Cook, Corcoran and Osborn in the second half, they fought well against a Stones side growing in confidence, backed by a vociferous following. The midfield was further reduced with Corcoran limping off, to be replaced by Fraser, as the Stones had spells on top, before the home side reeled them back in. The visitors’ best chance was a Joe Turner cross that was turned into the side netting by veteran striker Scott McGleish but neither side could do enough to claim all three points.