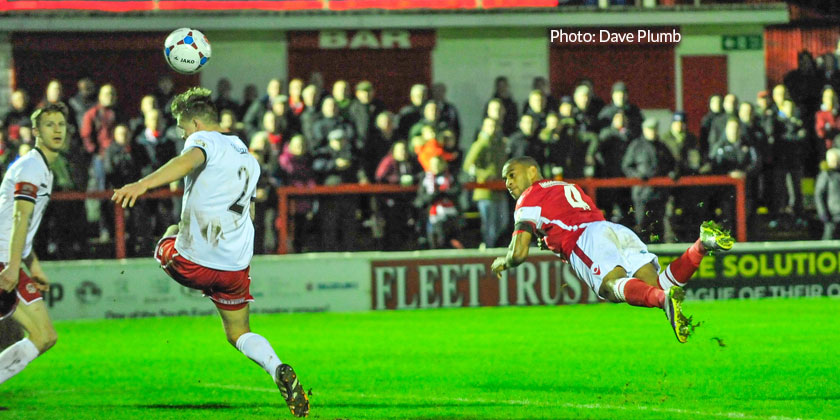 Fleet battled to a second goalless draw in succession but will be kicking themselves at not taking all three points after a dominant first-half display and a second in which they continued to create chances. But Truro, with just one defeat in 14, showed why they are a hard team to beat as they dug in and defended stoutly, happy to frustrate their hosts for most of the 90 minutes.

Daryl McMahon opted for a 3-5-2 formation, with Tom Bonner coming back after suspension and Matt Godden and Danny Haynes returning to the line-up, which meant Matt Fish, Charlie Sheringham and Dean Pooley made way. New signing Bryan van den Bogaert, meanwhile, had to settle for a place on the bench.

After a touching tribute and minute’s silence for Peter Norton, Fleet got into their flow extremely quickly and Danny Kedwell forced a corner after his shot was blocked in the first minute. Fleet won a number of corner in the opening exchanges and Kedwell was full of running, hitting another shot just wide from a low delivery by Danny Haynes.

Kedwell then found himself wide on the right on 13 minutes to pick out Stuart Lewis lurking on the edge of the box and his drive was just about kept out by goalkeeper Martin Rice. Fleet’s closest effort was two minutes later when Kedwell watched Godden run behind and delivered the ball on a plate and though Godden got clear of the keeper, his shot went agonisingly wide of the far post with many Fleet fans already celebrating.

Truro had their backs to the wall and some of their defending was a little hurried and though they had plenty of bodies in the way on 21 minutes, Godden still found a way to curl a great shot from 20 yards just past the upright.

The visitors carved out their only chance of any real note minutes later, Cody Cooke gaining ground down the left and Fleet were a little panicked as Bonner had to get a block in on Ryan Brett’s shot on target to divert it for a corner. Brett was perhaps fortunate to stay on the pitch 10 minutes after that when he slid in on Kenny Clark way after the ball had been cleared but referee Kaye deemed it worthy of just a caution.

Fleet closed out the half strongly and a good spell of pressure ended with Jordan Parkes’ delivering an inch-perfect pass from deep, which Kedwell attacked but sent a header just too high and wide, under pressure from the goalkeeper. Rice then had to be alert to a quick shot from the edge of the box by Haynes, which had the keeper at full stretch, and Haynes then had another effort, flashing one across the goal before the half-time whistle sounded.

Truro had more purpose about them in the second half as Fleet sought to turn early pressure into the goals they so desperately wanted. A wobbly spell from 50 minutes unsettled the Fleet defence and when Brett’s free-kick wasn’t gathered at the first attempt by Brandon Hall, it required a heavy boot to clear the danger.

Dan Green then threatened to expose the Fleet back line as he got the better of Anthony Acheampong and advanced at goal but luckily the cross into Craig Duff was too far behind the advancing Truro striker.

John Paul Kissock was introduced for Lewis as Fleet started to get into a higher gear once more from the 70-minute mark and the game opened up, with the crowd channelling their frustration as the pace quickened. Anthony Cook whipped in a cross that eluded Haynes on the six-yard box and then Godden behind him as a defender managed to deflect it for a corner. Haynes then saw a close-range diving header somehow turned away for another corner after excellent vision from Kedwell had sent Godden behind the Truro defence.

A succession of efforts from Haynes, Godden and Rance kept Rice busy in the final minutes but a stout Truro were keeping the home side at arm’s length and with the goalkeeper succeeding in running the clock down with increasingly ponderous goal kicks, Fleet ran out of time to make any further impression.

Ed Miller has been Ebbsfleet United's communications manager and programme editor since 2014 and responsible for the club website since 2007. Contact him on ed.miller@eufc.co.uk
PrevPreviousComing up in Community 2016!
NextVarney commits long-term to the FleetNext