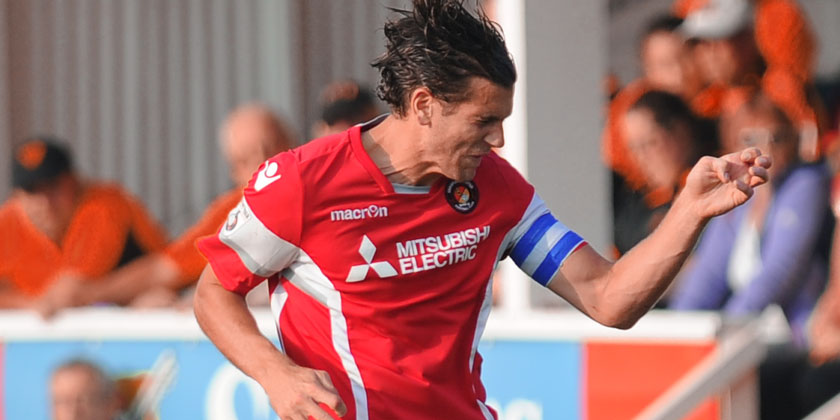 A goalless draw at the end of a fairly subdued match is hardly the sort of thing that will be talked about for years to come – but referee Anthony da Costa’s sending-off of four players in one incident means this game will live long in the memory.

The two skippers – Tom Bonner and Adam Everitt – saw red, while both sides lost a further man each when Anthony Cook and Manny Monthe also received straight reds following a goalmouth altercation that soon descended into a mass brawl.

It was a curious incident to say the least in a game that hadn’t really had much fight about it from either side up to that point. Fleet, starting with the same team that drew at Truro last week, came out all guns blazing and pinned the visitors into their own half for the opening 10 minutes.  The game was only two minutes old when the Fleet could have been in front as Matt Fish supplied Matt Godden deep in the Hayes box. He turned it into Stuart Lewis’s path but the midfielder’s close-range shot was well held by James Hamon, making his first appearance for the visitors on loan from Exeter City.

Fleet continued to press forwards but Hayes packed men behind the ball and held their line well. But from the quarter-hour mark, the visitors grew in stature and began to get the ball upfield themselves. On 17 minutes veteran Darren Purse fired into the side netting as Hayes got time to pick out their passes and then Bryan van den Bogaert was cautioned for a foul on striker Elliot Benyon.

Fleet almost got themselves in a tangle on 37 minutes when they failed to clear their lines and Luke Williams cross from the right was just out of Benyon’s reach. At the other end, Hamon saved a McLean effort from a Cook cross, Fish sparked a goalmouth scramble and Godden was barged aside in the box but the penalty appeals seemed a little optimistic. By then, Hayes had succeeded in keeping Fleet at arm’s length on the 25-yard mark and the home side didn’t have enough creativity to get past.

Like the first half, the second started with a great opportunity for the home side. An excellent cross from Cook was headed low by McLean and Hamon only managed to parry it back into the six-yard box but it bounced just behind Godden who would undoubtedly have tucked it away from that range had it fallen more kindly.

There was little further action until the hour mark when defender Manny Monthe was penalised for a foul on Cook. Monthe’s histrionics were quite something to behold and he was clearly still wound up when the next action occurred. A set piece to the far post saw what appeared to be Darren Purse raising an arm towards Anthony Acheampong and the two confronted one another. Two soon became 20 as players from both sides piled in and it was difficult to see who the protagonists were in such a melee. Nonetheless the referee consulted his two linesman and dismissed first Bonner, then Monthe, followed by Cook and finally Everitt, who received a straight red having been awarded a yellow a short time earlier.

There was hardly a soul inside Stonebridge Road who could have called the incidents that led to the dismissals but nine-a-side it was and Daryl McMahon had to rethink his gameplan, having been ready to introduce Danny Hayne and Charlie Sheringham.

With the extra space on the pitch, Fleet dominated the remainder territorially but couldn’t conjure up a clear-cut chance. McLean’s rasping shot hit the side netting, substitute Haynes fired just wide and Dean Rance had the best chance as his shot was deflected behind. At the other end, Elliot Benyon could have stolen the points when a smart turn and shot whipped just wide of Brandon Hall’s post.

In seven minutes of added time, Fleet continued to press but to no avail. Rance had a good shout for a penalty when he was upended just inside the 12-yard line but the referee was clearly not going to win a popularity contest at Stonebridge Road as it was and he waved away the protests to render the game goalless.

Ed Miller has been Ebbsfleet United's communications manager and programme editor since 2014 and responsible for the club website since 2007. Contact him on ed.miller@eufc.co.uk
PrevPreviousFleet hope for happy days – starting with Hayes
NextFleet haven’t any time to loseNext