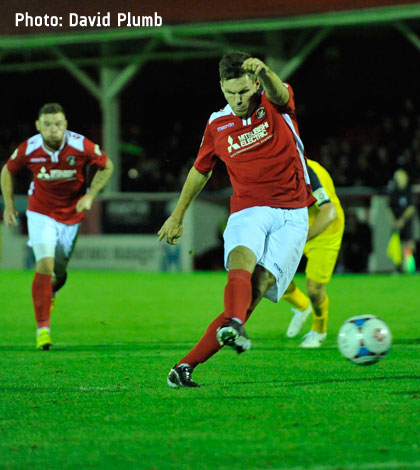 Fleet were left frustrated after a 13-goal spree in three games was abruptly ended as a well-organised Eastbourne side shut the home side out – but add a penalty miss into the mix and it was a doubly infuriating evening for Steve Brown’s side.

The manager named an unchanged side against a visiting team who had won only one in the last six games but who sat only two places behind the Fleet. And they looked good value for their league position from the start, steady in defence and with the likes of Gavin McCallum providing plenty of running just behind the front line.

Brandon Hall had to be alert in the early minutes to push away Dean Sinclair’s cross while at the other end Matt Johnson’s deep cross had too much weight on it but almost caught out goalkeeper Lewis Carey as it sailed towards the top corner.

McMahon then had a shot on the turn that Carey somewhat awkwardly turned behind but neither side could muster a clear-cut opportunity. The Fleet skipper had two more well-driven efforts from outside the box but the visiting defence held firm, always with a body in the way and a man spare to clear the danger.

Hall had to gather at the feet of a typically physical Elliott Charles after Kenny Clark’s back pass had invited trouble but it was essentially a midfield battle, with Eastbourne occasionally switching to three up front as McCallum joined his front pairing in attack. It was a formation that meant Fleet could never quite settle into a pressing game and had to keep one eye on the visitors breaking forward.

Fleet probably edged the first-half but they were on the back foot early in the second as McMahon and Dean Rance looked stretched at times. However, they gradually reimposed themselves on the game and Rance embarked on one decent run through the Eastbourne middle but his final ball was poor and Carey gathered.

Charlie Sheringham had the ball in the net with a low shot from a looping Anthony Cook cross but that was ruled out for offside. And then Fleet began to turn the screw. On 66 minutes Cook delivered another low ball into the six-yard box and Billy Bricknell was inches from opening the scoring, the goalkeeper just managing to do enough to keep the ball out of the goalmouth.

Bricknell was at it against moments later, firing in a good effort from 12 yards that Carey parried and Matt Johnson returned along the six-yard line but nobody could get the vital touch. And a minute later came an even better chance.

It was Cook again who advanced along the left byline and into the box where he was clearly tripped by former Fleet trialist Kiran Khinda-John. It was the opportunity the Fleet needed in such a tight game but Sheringham’s penalty to Carey’s right was at a nice height for the goalkeeper and he pushed it away.

Brown sent Matt Godden into the action at Bricknell’s expense, but he had little else of an attacking nature on the bench and Fleet toiled for the remaining 20 minutes to make something happen. Sheringham struck a well-executed half volley that bounced past the foot of the post and Godden’s pace took him clear on goal but he was denied by a last-ditch Ian Simpemba tackle.

Eastbourne looked rattled for the first time in the game but could still mount an attack and McCallum had Hall back-pedalling with a high shot that the Fleet keeper was relieved to see edge off target.

Fleet looked the only likely winners in the final few minutes and Cook had a shot blocked six yards out while Godden’s snapshot from the rebound was deflected over for a corner. McMahon then had a free-kick from 15 yards and Cook kept Carey busy with another wicked shot in time added on, but Eastbourne – probably the best side to visit the PHB Stadium this season – held firm.

Ed Miller has been Ebbsfleet United's communications manager and programme editor since 2014 and responsible for the club website since 2007. Contact him on ed.miller@eufc.co.uk
PrevPreviousManager’s Notes 27.09.14
NextAll-action Academy side wins againNext