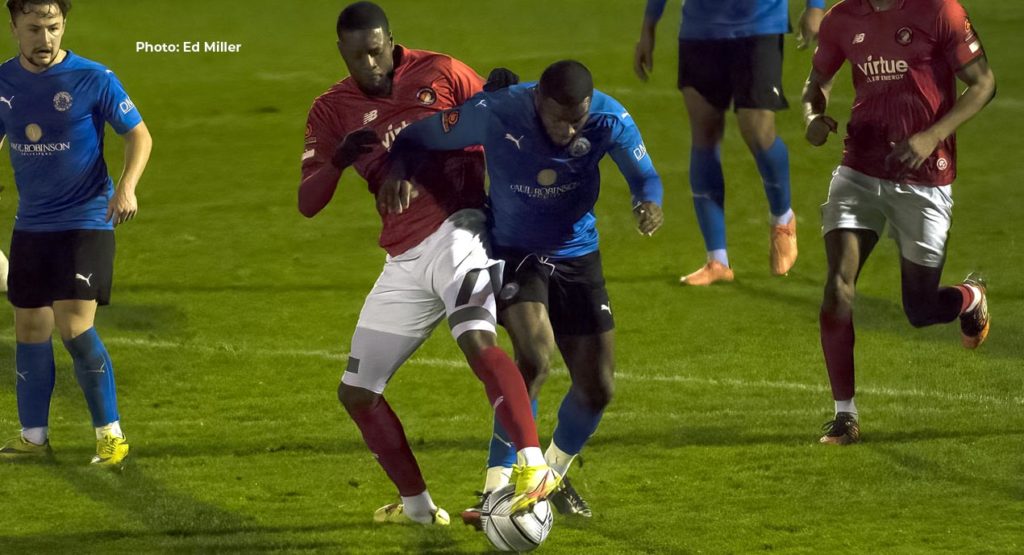 New Year fireworks are no doubt set for the Dartford derby game on Sunday but today’s last game of 2021 was more a case of blanks as Fleet settled for a home point in a goalless draw with Billericay Town.

Despite an increasingly dominant second-half, with chances continuing to fall deep into time added on, the visitors’ rearguard action prevailed and with a little help from goalkeeper Rhys Lovett, they kept their goal intact.

Having only managed a skeleton-thin crew in the previous match v Bath, Fleet were able to fill the bench this time around as players returning from their isolation period yesterday brought Dennis Kutrieb’s available squad just about up to 16 – and in came Alfie Egan and Adam Mekki to replace Elliott Romain and Dominic Poleon.

The visitors named ex-Fleet trio Bagasan Graham, Marvel Ekpiteta and Norman Wabo in their starting lineup, with Lawrie Wilson on the bench.

With the morning rain having died away to leave the Kuflink Stadium pitch in good condition, it was Billericay who got the first rub of the green when Graham put Sido Jombati under some pressure as he tried to play the ball back through defence after two minutes and the ex-Fleet winger might well have earned more than a corner had he managed to claw himself away from Jombati.

Rakish Bingham tested his range moments later before Sefa Kahraman went nearer with a run forward and strike that flew just past the upright. Fleet continued to press and on 15 minutes, a well-worked move through midfield released Egan but his first-time shot was saved by Lovett.

The lively Ben Chapman was a willing runner down the right-hand side for the Fleet and one of his numerous breaks throughout the first-half gave Jack Paxman a half-chance to strike on goal, the ball bouncing back off Ekpiteta to vociferous handball claims from the home fans.

The referee showed a pair of yellow cards to begin what was to become something of a flurry later on as both Kahraman and Chapman found themselves cautioned. Fleet’s best chance then followed on the half-hour, a short corner dummied by two players to leave Bingham with the opportunity for a firm drive on target but that was charged down and blocked.

Egan saw an effort divert wide from close range and Kahraman couldn’t get any power on a Greg Cundle free-kick as that too slipped off target. Another free-kick, this time from Mekki, was saved by Lovett and a further Egan shot to the near post also found the goalkeeper in the way.

The visitors, who lost Graham to an injury, had only a long-range Munns effort that sailed over to show for their few ventures towards the Fleet box but their plans to frustrate the hosts had certainly worked.

Indeed Dennis Kutrieb went for more offensive action after the break, bringing Poleon on for Kahraman. And Fleet’s possession football kept them on the front foot for almost all of the next 45 minutes but still Billericay, whose players by no means looked like a side rooted to the foot of the table, managed to hold out.

A second big chance for the breakthrough came courtesy of Mekki who excellently found a path into the box and set himself up for a shot on target but Lovett was in no mood to loosen his grip on the clean sheet.

Mekki made way for Craig Tanner as Fleet continued to search. Cundle arrowed a corner across goal to the far post that ran to safety and the same player’s run then unlocked a fraction of space for Bingham but his close-range reaction effort was deflected behind.

Billericay had a brief few minutes where they caused some anxiety and Chris Solly had to recover well after his initial slip had let Wabo through on the break, before he rescued the situation with a timely sliding tackle. Tanner then lofted a superb long ball into Bingham’s path and the Fleet No.9 tried a first-time effort to hook it round Lovett but he couldn’t quite get the connection he needed on it.

The action was coming thick and fast as the game entered its final period and Femi Akinwande got space down the right to fling across a dangerous ball that ran right along the Fleet goal invitingly but the home side mopped it up and sent Poleon away on the counterattack, Lovett quickly off his line again to deny the Fleet striker.

With a few minutes left of the 90, Cundle ended some neat buildup play with a run into space to supply substitute Elliott Romain but again the loose ball just wouldn’t fall where the Fleet front men wanted it. Billericay thought they’d won it with six minutes left when Shaq Coulthirst ran through a gap to fire beyond Chris Haigh but the offside flag denied him before Fleet saw two more golden opportunities go begging.

Into the five minutes of added time, Paxman’s deep cross was cut out for the first of a succession of corners. Cundle then created one last chance for Poleon who saw his goalbound effort blocked and finally Bingham’s presence of mind opened a gap in the Billericay defence and it fell to Jombati who found the target but also that man Lovett who capped his man of the match performance with one final save.

So it was one point to end 2021 with Fleet now enjoying a few more days for their returning players to train prior to the big North Kent derby this Sunday.

Ed Miller has been Ebbsfleet United's communications manager and programme editor since 2014 and responsible for the club website since 2007. Contact him on ed.miller@eufc.co.uk
PrevPreviousPreview: last on the Bill for ’21
NextBlues bar the way to Bank Holiday honoursNext