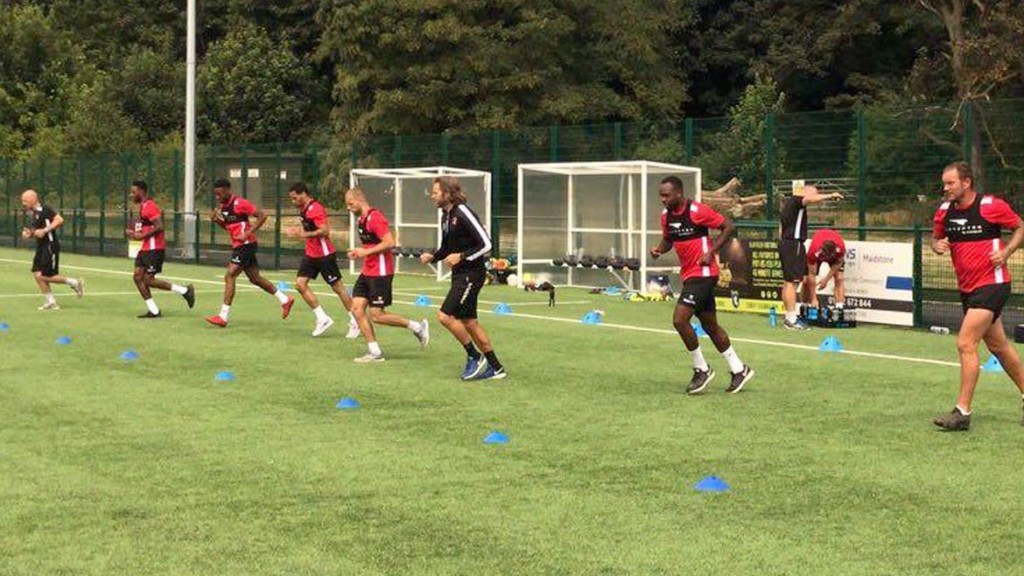 Daryl McMahon and his players reported back for training at the beginning of this week and the Fleet boss was pleased to have something to focus their efforts on after a physically punishing couple of days in the heat.

The opening days of pre-season training tend to be tough and gruelling and in heatwave temperatures, the players certainly know they’re back at work. The Fleet were handed a set of opening fixtures that more resembled a Football League list, with Chesterfield, Leyton Orient, Hartlepool United, Barnet and Aldershot Town all up first, as well as fellow play-off semi-finalists Sutton United.

But the manager was taking those in his stride.

“The fixtures are great to be fair,” he said. “Last season I looked out for the Leyton Orient game and I didn’t have far to find that one again this season! When you come back in pre-season, you’re probably not thinking about the first game of the league campaign as a manager, staff or player. You’re just getting from day to day physically because you know it’s tough making it through pre-season. But once the fixtures come out and then you can see who you’re playing against, the type of teams you’re up against in that first bit of August, that sharpens your mind to make sure you’re ready for those games. That’s the biggest thing for me when the fixtures come out – in my mind I know we’ve got to be ready for who we’re playing.”

And the “difficult” start mentioned by many isn’t fazing the boss either. “They’re all good sides, big names,” he said. “But I said this to the players, we finished last season very strongly, we finished it as one of the in-form teams in the division, form-wise we were probably up there with the best teams in the division. And I think we’re going to be a difficult game for all of them. I’ve got no doubt come August we will be.”

McMahon is still on the hunt for a striker with a target shown round the club already and once again it’s a case of waiting for the player in question to decide on several options.

“We’ve had the conversations about personal terms,” the Fleet manager told eufc.co.uk, “but players will always have another couple of options. That said, we’re hopeful and that’s all you can do until the final decision is made and we have signatures on contracts. And that will be the last piece in the jigsaw. When you look at the squad after that, we’re particularly strong and that’ll be us all but done.”

If the Fleet can add their preferred choice up front, that will give McMahon a workable squad count of 20 (not including Danny Mills and Bagasan Graham who are available for transfer, and goalkeeper coach Michael Jordan as backup). That compares with the 24 that went into the Guiseley opener last season, though that total included the injured Bradley Bubb and two Academy graduates.

“We’ll have a smaller squad than we probably had in previous years,” he said, “but if I’m being brutally honest it will be higher in quality than what we’ve gone into at the start of seasons before, especially once we get our final target on board. Obviously if we get injuries we will look at it again and the situation changes throughout the season, but I’ll be happy with the squad when we have that striker. And we’ll probably have another player featuring against Billericay as well that we’re having a look at, so the pieces are falling into place.”

Ed Miller has been Ebbsfleet United's communications manager and programme editor since 2014 and responsible for the club website since 2007. Contact him on ed.miller@eufc.co.uk
PrevPreviousWatch England-Sweden on our big screen
NextPREVIEW: Billericay TownNext