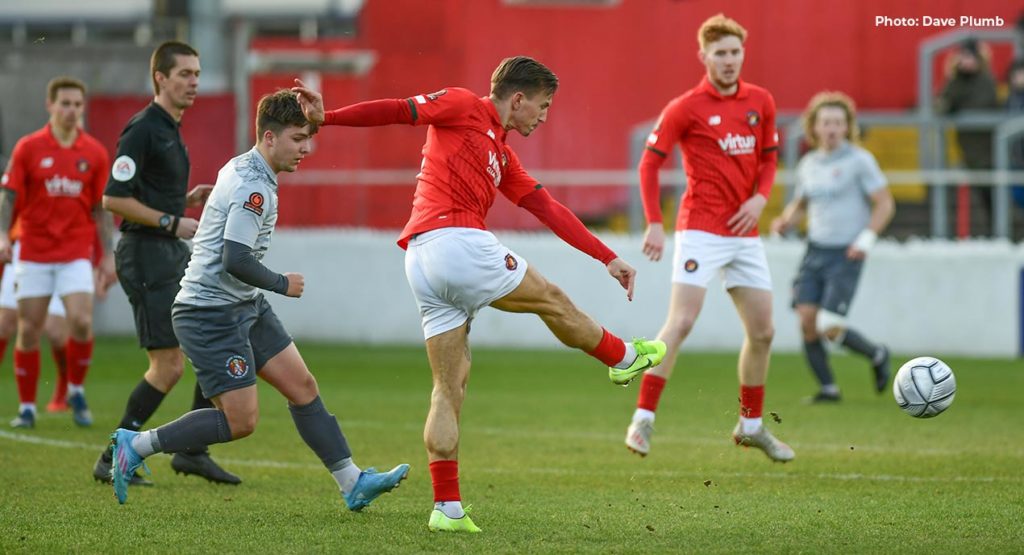 Fleet boss Dennis Kutrieb was upset at his side’s sloppiness in front of goal with only Ben Chapman’s 52nd minute strike to show for their efforts proving insufficient to overcome Slough Town.

The Fleet manager was equally as frustrated by that as the defensive error that led to Slough’s winner five minutes after Chapman’s equaliser.

“It’s even more frustrating how sloppy we were in front of the goal in the first half,” Kutrieb told BBC Radio Kent’s Matt Cole, “because we can have the lead and we were not sharp enough, [there was] not enough determination to put the ball in the back of the net. And [their winner] is massively frustrating but it can happen, it’s football so it’s communication. If there is a miscommunication and no-one takes the ball then it’s a little bit too late, it can happen. No-one wants it.

“It always looks easy when you have a 5-0 win [in midweek] but you need to go for 90 minutes, to fight hard. We had some spells out of possession [against St Albans] where we needed to work hard against the ball but for me there’s no excuse when you want to be in the mix and up the table, you need to put the ball in the back of a net. In the first-half I don’t know how many clear-cut chances we had but you need to come back in the game; if it’s maybe 1-1 at half time it’s a little bit different – then you have 45 minutes and you don’t have the feeling all the time you need to chase, you need to score. Then we finally had the equaliser but conceded such an easy goal, so you need to go again. So it’s not easy but when you want to be up top, then you need to make sure that you put the ball in the back of the net.”

Slough succeeded in slowing the game down and frustrating any flow that Fleet got into but Kutrieb credited the opposition and said those tactics were what his side needed to overcome.

“The opponent was much better today [than Tuesday],” he said. “We haven’t had the same energy levels and they gave us a great battle and that was much more complicated for us. [Their tactics], it’s football. The only man who can deal with it is the referee, he started to deal with it after 49 minutes in the second half, so far too late. If he dealt with it in the beginning…

“I asked him why we had just two minutes added on [in the first-half] because it started then. But the time has gone to talk about the referees and blame them again and again. I could shout at them for 90 minutes but it doesn’t make sense. If you book the goalkeeper or whoever early and add 10 minutes, then it’s fine. But I can’t blame Slough because they did what they wanted to do and they got a well-deserved win. All over the pitch they fought and worked so hard. It’s not like we dominated them for 90 minutes and had 15 chances and then they don’t know how they got the win. They know exactly how got the win and it was deserved. If we don’t score early in this game like we could have, then of course it can end like it ended.”

Fleet are without a midweek game for the first time since Christmas and then travel to Havant & Waterlooville who dipped below Slough in the table after their defeat at Concord Rangers.

“Havant is another tough game away. They’re struggling at the moment so they need to get points as well. They bring in five or six new players in the last week so they definitely want to turn it around. But it’s similar for us. Of course I’m not happy about it at the moment but you can make it better if you get a win at Havant, then the world looks a little bit different for me.

“We need to start [being more consistent]. If you have a strong end [to the season] it will help you, but if you don’t start early enough then maybe it’s a little bit too late. I’m not concerned about the bigger picture, I’m just concerned at the moment because you need to have the determination to put the ball in the back of the net in the first half. Then we have the lead and the game is completely different. We will definitely talk to the boys and make our video session about the things we should have done better and then we prepare for Havant.”

Ed Miller has been Ebbsfleet United's communications manager and programme editor since 2014 and responsible for the club website since 2007. Contact him on ed.miller@eufc.co.uk
PrevPreviousFleet 1-2 Slough Town
NextAlan WoodsNext