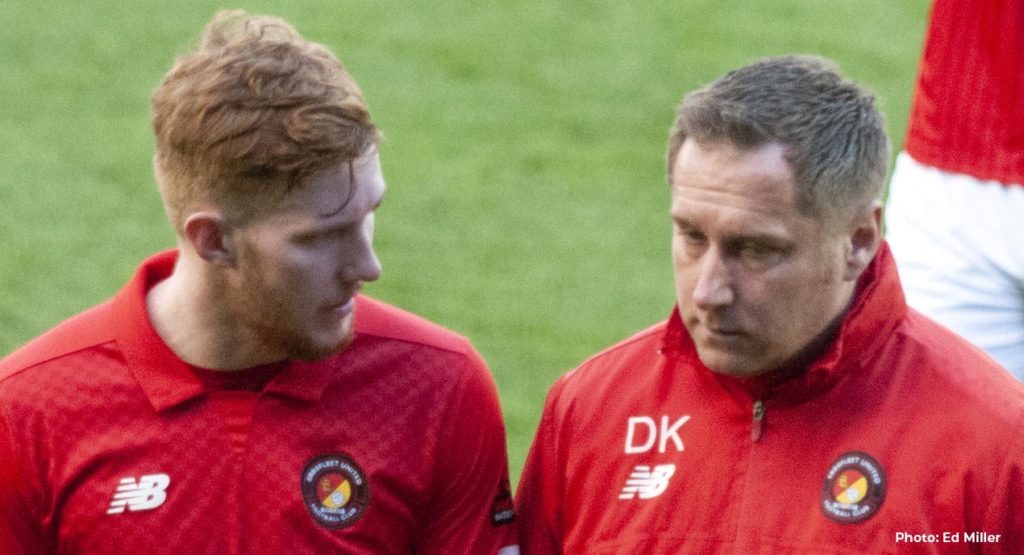 “Everyone who came in did a job”

Fleet’s incoming players did a great job in ensuring their side’s three points against Hampton, said Dennis Kutrieb. The Fleet boss made five changes to the side that lost at Maidstone in midweek, with two of them getting the crucial goal and the man of the match award.

“We saw a great game from Kieran, a great game from Woody, Chapman played a great game,” said Kutrieb. “I think everyone who came in today did a good job for us. Maybe it was a solution for this game but we have the next game in three days and it’s not always about finding solutions for different players, sometimes it’s important that you can rest a few players if you’re not mentally prepared, mentally a little bit tired, I think that was one reason for Tuesday as well.

“Every win is important. Of course after two losses and heavy defeats you need to find the right solutions to get back on track and I was very impressed with the boys. They worked very hard – especially in the first half – and could have had the lead with the penalty but I think in the first 10 minutes we [also] had two or three good chances.

“The most important thing to me was to see the reaction from the boys. They have the right character and even when we conceded nine goals in two games, everyone was aware that that was not good enough, that we need to work harder and we need to make sure we find the right solution – and that’s one my [responsibilities]. The boys need to work hard on the pitch and that’s what they’ve done and that’s the reason I’m impressed with them… even if the win could have been a little bit easier had we scored in the first half. But I take every win because three points is three points. Now we recover and recover quickly and then we’re definitely ready for Dartford.”

The winning goal of course arrived with some panache from the boot of Wood and Kutrieb wasn’t surprised by the quality of the strike.

“That’s what we see in training sessions all day long,” he said. “He is definitely able to do it, that’s the reason why he plays that position, he can be a big threat. Of course he didn’t play many minutes in the past and you could see he was a little bit tired later in the game. But if we get him fit 100%, he is all day long a very good player for this league.”

Alfie Egan was another who returned to the side and put in a stylish performance in midfield – and Kutrieb said sometimes his players benefit from a period out of the starting 11 or the matchday squad.

“Maybe it helps when you sit on the bench and get the feeling of how it feels to be on the bench,” he said. “Get fresh in your mind and be really hungry for playing games and being on the pitch and making an impact, to score goals and win games or whatever, that helps sometimes. Even when you are not in the squad like Alfie Egan on Tuesday, he suffered not [being] in the squad [against Maidstone] and today he was back on the pitch. And he was everywhere, he covered the whole pitch and that’s what we need to do. We don’t have the rub of the green, we need to work hard for three points, it’s not like we just play and we get our wins.”

Fleet might have led sooner but for the swing of a boot by Hampton goalkeeper Alan Julian and Kutrieb brushed aside that missed opportunity to praise his side for digging deep to produce a winning goal.

“A penalty must be a goal. If the goalkeeper saves it, or [it hits the] crossbar or over the goal of course we can talk about small margins. For me a penalty has to be a goal, it’s a big chance, it’s scoring from 12 yards and just you against the goalkeeper. But it’s fine. Greg Cundle felt he would score for us and I don’t have a problem [with him taking it].

“If you don’t score from a penalty you need to score like Woody did. You need to get on with things – if it’s not working for you at one moment you have to work harder and that’s what was very impressive to see because they were very much digging deep for 90 minutes and made sure we didn’t concede.”

Ed Miller has been Ebbsfleet United's communications manager and programme editor since 2014 and responsible for the club website since 2007. Contact him on ed.miller@eufc.co.uk
PrevPreviousFleet 1-0 Hampton & RB
NextRisk pays off as Wood works a winNext