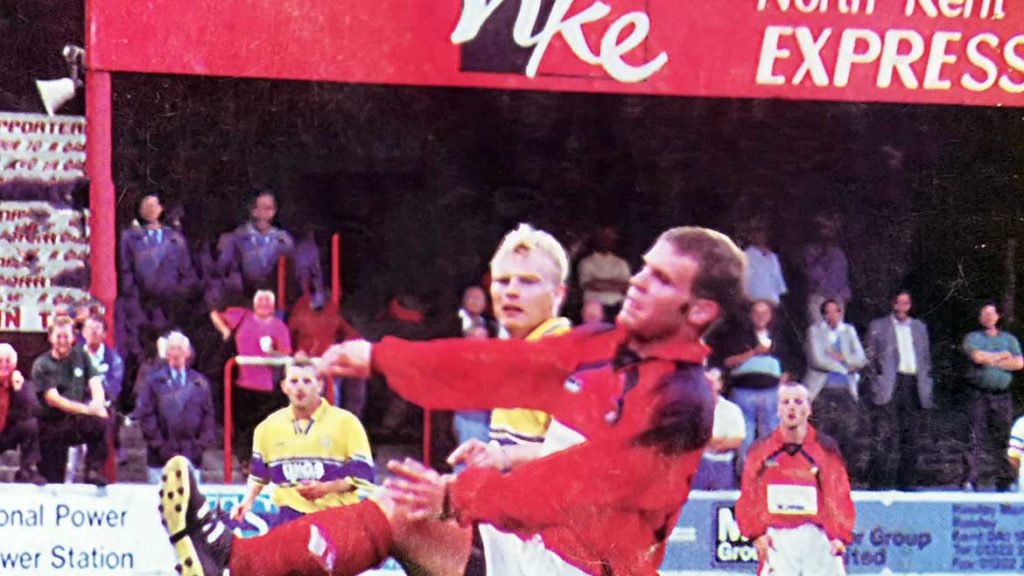 End of a century

Twenty years on from the dawn of a new millennium, it’s tempting to suggest that the last two decades have been the most consistently successful such period in the Fleet’s history.

Not necessarily in terms of silverware – but in the level the club has played at and the highs we have reached at certain points along the way. In the 20 years since 2000, the Fleet have been at National League level or within a shout for promotion to it in every single season. Average attendance has grown from the 400-500s of the late Nineties to the near 1,600 high of 2017/18.

Much of the reason for that was the foundation laid as the old century passed into a new one two decades ago. In 1998/99, Fleet had finished in their highest position in the non-league pyramid for almost 10 years (10th in the Ryman Premier) and our second highest in almost 20.

Andy Ford entered the new century in what was his third season in the manager’s job, working with a part-time squad under chairman Peter Dean in what was to prove his final season in charge of the club. Gone were long-term club sponsors Mister Ham Man, replaced by Scania Trucks, and a new red-black home shirt replaced what had been quite frankly something of a red-white eyesore from the year before.

New signings in the summer of 1999 had included midfielder Lee Spiller for an estimated £10,000, returning to the club from Margate plus the occasionally fiery Luke Anderson from Dulwich Hamlet; winger Nick Hegley, a former Coventry City youth; and central defensive prospect Ross Edwards (Leatherhead).

Out the door had gone playmaker Andy Adebowale, the experienced but ageing Mark Newson and Mark Cooper (who would rejoin for a couple of games that winter). Ford’s nucleus was a good one, however, with player of the year Craig Wilkins retained as part of a spine that included goalkeeper Scott Tarr, Justin Skinner, Corey Campbell, Bruce Sewell, Jimmy Jackson, Darren Smith, Dave Powell and Paul Booth.

The season got off to a disappointing start with highly fancied future rivals Canvey Island enjoying a 1-0 win at Stonebridge Road in front of 639. There was the traditional opening-day sending-off, too, with Anderson seeing red – and not for the only time – while stand-in goalkeeper Micky Desborough’s fumble handed the points to the Gulls.

Indeed there was little cheer in the opening weeks. A 1-0 win over Slough Town was the only victory in the opening 13 games, leaving Fleet initially in the bottom three and out of the FA Cup at the hands of Fisher Athletic (Anderson sent off again for what manager Ford called a “horrendous tackle”).

After the intial 600+ attendance, crowds were back in the low 400s fairly swiftly as Ford admitted it was “an understatement to say I am disappointed with our start”.

And the manager acted – Tarr departed the club, replaced in goal by Desborough and then later local lad Darren Smith (which confused everybody reading the teamsheet as a midfielder by the same name was also at the club). A striker who was to spearhead the club’s success, Che Stadhart, was brought in from Hampton to bolster the front line, accompanied by the experienced Steve Restarick, while another old head in Scott Lindsey anchored the midfield.

Results picked up: 14 goals were scored in three games in despatching Farnborough – where Hegley grabbed a hat-trick and Stadhart opened his account – and against Heybridge Swifts and Aylesbury United. By Christmas, Fleet had gone from third bottom to sixth, although the 15-point gap to leaders Dagenham & Redbridge – managed by Garry Hill – left little hope for a promotion challenge. A 14-game unbeaten run was ended at Farnborough but Fleet ended the 20th century on a high, an impressive for the time 886 seeing Dulwich Hamlet beaten 3-1 at Stonebridge Road.

By now, Ford’s lineups had stabilised (bar the goalkeeper’s position as Glen Knight briefly became the fourth of six keepers that season). Sewell, Campbell, Wilkins and Darren Gowler was the nominal back four with Jackson, Lindsey/Anderson, Spiller and Hegley in the middle. Stadhart, Restarick and Powell shared attacking duties and Fleet continued to improve.

An exit at Dover in an FA Trophy Third Round replay was harsh on the Fleet but a season-high of fourth place was achieved in January.

The final months of the season tailed off, however, with a particularly nasty 6-0 reverse at Harrow Borough the pick of a bad bunch. Canvey Island triumphed 4-1 in Essex as Fleet won only one game in 11 up to March.

Goals became a little harder to come by as it was clear there was nothing much to play for, and Fleet ended the league campaign with a typically inconsistent set of results, winning 5-1 and 4-3, then losing 5-0 and 4-1 in the final four games.

Crowds had crept back down below 400 but there was the club’s first silverware of the new century as Folkestone Invicta were clinically despatched 3-0 in the final of the Kent Senior Cup at Stonebridge Road.

So the old century ended and the new one began with Ford laying the foundations of what was to follow. It was by no means the end product and not even a particularly inspiring season – with Fleet finishing 11th, one place lower than the year before.

But with Wilkins, Jackson, Stadhart, Booth, Smith, Skinner and mid-season arrivals such as Matt Lee and Aaron Barnett in place, the manager was sowing the seeds of a squad that would storm to the league title two years later – which set the tone for two decades of – for the most part – progress that sees the Fleet at its current level. And title-winning captain Jackson was to learn plenty of leadership from the skippers who preceded him such as the late Bruce Sewell and Scott Lindsey.

With the club set for fresh chairmanship under a new regime led by Brian Kilcullen as the new century opened up, Ford had a few mere tweaks ahead of him to steer the Fleet on an altogether new course.

Ed Miller has been Ebbsfleet United's communications manager and programme editor since 2014 and responsible for the club website since 2007. Contact him on ed.miller@eufc.co.uk
PrevPreviousBed down for an afternoon’s nostalgia
NextMatch rewind: Hereford UnitedNext