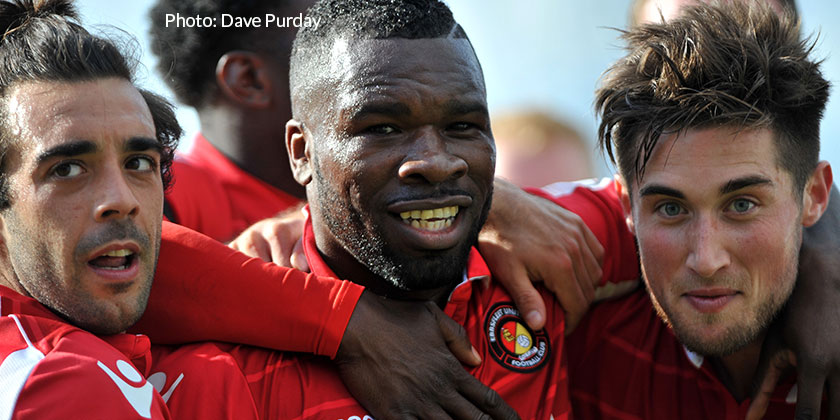 Fleet comeback king Aaron McLean hailed the club, players and fans as his emotional return from a lengthy injury almost proved too much for the striker in his post-match interview with BBC Radio Kent’s Charles Webster.

McLean netted a penalty in time added on after initial conversations over who would take the kick between Anthony Cook and Bradley Bubb, on a hat-trick, eventually fell McLean’s way.

“It’s been a long road to get back fit and I’ve worked hard over this last six or seven months,” said McLean. “To get back today and to score a goal is all I could have wanted really.

“It’s hard because I was predicted nine months [out]. I knew I was going to work hard and do everything I possibly could to get back this season. I think it’s been just over six months since the operation. I knew I’d put the hard work in and luckily it’s paid off.”

The former Hull City and Peterborough United striker’s return couldn’t have been timed better, with the injury to skipper Danny Kedwell, and McLean is determined to play his part in the short time left.

“Keds is massive for us,” he said. “When he scores and even when he doesn’t, he’s a huge huge part of this team and we’re going to miss him massively. But if I can try and help the two lads who played today – who were outstanding–  and add a little bit to the team, I’m more than happy to do that.”

McLean has felt no adverse reaction to returning to training or the runout today and is hoping to up his match fitness as much as possible in the games remaining: “I feel good. Obviously match fitness is different to fitness in a gym. I’ve been doing a lot of running, a lot of bike work and stuff like that but actually being out there in a proper game is a totally different fitness. Fifteen minutes today will be a good runout. If I can try to extend that as the rest of the season goes on, then if we do end up in the play-offs, I’ll be firing ready for that.”

And the Fleet substitute praised everyone at the club for keeping him going through his long rehabilitation and hopes the goal today is only the first instalment in paying back the Fleet fans.

“The lads’ reaction today was a little overwhelming to be honest,” a choked McLean admitted. “I’ve been at clubs where that kind of thing wouldn’t happen so it just shows the unity in the squad. That unity will be what carries us over the line. Everyone from [Peter Varney] making sure I’ve got the best of everything to the gaffer’s support and the coaching staff and the players, everyone’s been brilliant with me. That was a nice way to say thank you today.

“The fans were unbelievable. They have been from the day I walked through the door. All through my injury, different fans that I speak to all send their best wishes and that today was as much for them as it was for anyone. Us as a club need to stick together and I’m sure we’ll all get to where we want to be.”

Ed Miller has been Ebbsfleet United's communications manager and programme editor since 2014 and responsible for the club website since 2007. Contact him on ed.miller@eufc.co.uk
PrevPreviousFleet 4-1 Eastbourne Borough
NextBoss pleased with second-half gear changeNext