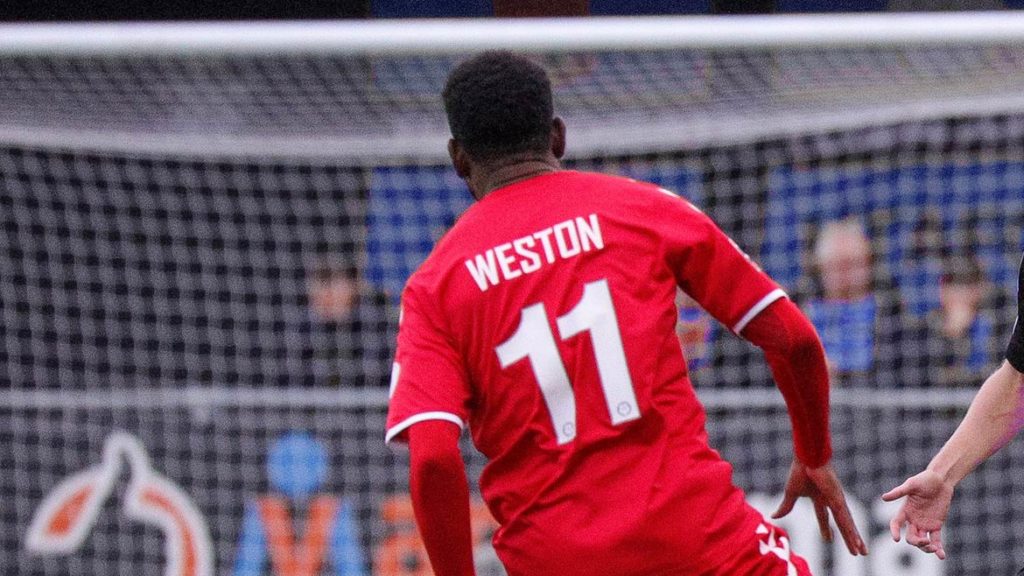 It was a tale of two penalties on the south coast as Fleet earned a draw at Eastleigh – but unfortunately both of them were missed by the visitors who could and should have picked up all three points.

Two second-half spot-kicks went begging as first Josh Umerah and then Frankie Sutherland saw their efforts fail as Eastleigh were reduced to 10 men in the closing minutes.

Fleet made three changes to the starting lineup, Andre Blackman, Alex Lawless and Tomi Adeloye making way for Jamie Grimes, Sutherland and Alex Reid. Umerah, back from suspension, had to make do with a place on the bench.

Looking to shrug off their midweek lethargy when they fell to Wrexham, Eastleigh looked to advance and they settled quicker. But it was Fleet who went into the lead with their first attack on four minutes. Former Ebbsfleet man Jack Payne gave the ball away to Alfie Egan who released Reid down the left. He weaved his way forward and beat Joe Partington down the flank to cross low for Myles Weston who was poised inside the box to fire home.

Deploying a back four, Fleet defended well as Eastleigh asked a few questions, the ball bouncing inside the visitors’ box on several occasions but without too much threat to Jordan Holmes.

When he was called into action, Holmes did his job but it was Grimes first into action when he did enough to keep Tyrone Barnett from turning on the penalty spot before blocking the follow-up shot from Scott Rendell.

Reid and Weston traded positions on the right and left flanks and it was Reid who kept the ball in the right corner until he could cross for Gozie Ugwu on 12 minutes but the header was cushioned and easy for Max Stryjek.

Fleet were largely restricted to occasional bursts forward, however, and when Rob Atkinson found himself through on goal on 19 minutes after a great solo run he should have equalised but Holmes got a knee in the way and sent the shot behind for a corner.

Seven minutes after that, Tyler Cordner was on the spot to stop Charlie Seaman’s pass from the right but the ball came back to Cav Miley and Holmes had to make another vital save from the midfielder’s strike.

There was a spell just past the half hour where Fleet enjoyed a slick passing period, keeping the ball away from Eastleigh’s defence in a 30-pass move and winning a corner but that was headed wide by Reid.

With the home side always looking capable of getting something inside the box, their equaliser on 38 minutes came via another avenue. After passing across the Eastleigh back line, a long ball upfield by Jack Payne lifted beyond the Fleet defence and landed for Tyrone Barnett. As the visiting defence claimed what seemed to be an offside decision, Barnett cut inside and squared the ball for Rendell whose lunge was enough to send the ball the wrong side of Holmes via Cordner’s touch.

That was it in terms of action for the first half with Fleet probably glad of the chance to regroup as Eastleigh ended as they had begun, with the ball in their possession for frequent spells.

The second half took a while to explode into life with Eastleigh’s pressing game undermined by the withdrawal of the injured Miley, Max Barnes coming on in a more advanced role.

The two sides were much more evenly matched with Fleet’s midfield able to gain more ground but when Jack King was penalised for handball on the edge of the box two minutes after the restart, Eastleigh were in range. The set piece bounced off the wall and fell to Andrew Boyce in a good position to the right of the box but he lashed it high and wide.

Fleet were so unlucky not be ahead 10 minutes later when a poor headed back pass to Stryjek was intercepted by Reid whose measured lob, first-time over the goalkeeper, was good but it bounced back off the crossbar with away fans off their seats.

Eastleigh threatened to thread passes in to Barnes, in between Marvel Ekpiteta and King, which Fleet dealt with for the most part. The substitute did, however, manage to squeeze through to stretch for a pass into the box that Holmes had to be quick to gather.

Cordner had to cover well as Barnes found a gap on the other side but Fleet were giving as good as they got. Weston, like Barnett in the first half, probably couldn’t believe he wasn’t flagged when he received a pass on the left flank and Boyce only just scrambled the cross to Reid out of his six-yard box.

With 20 minutes to go, both Fleet strikers made way for Umerah and Adeloye and within a minute, the former turned his man and wriggled through on goal from an angle before he was sent tumbling.

The assistant referee called the foul and Umerah picked himself off the floor for the spot kick but blasted it high over Stryjek’s bar.

Adeloye and Weston prowled around the Eastleigh box as Fleet pressed the home side into the final third for a spell but were relieved when Rendell’s header from a slick move at the other end was ruled out for offside.

Josh Payne was cautioned for a necessary foul on the impressive Rob Atkinson who waltzed forward from his own box to the Fleet area. From the resulting free-kick, Charlie Seaman’s twisting effort was well saved by Holmes, who was bundled over his line by Rendell and the two players were booked for the flare-up that followed.

But four minutes from time Fleet were handed another opportunity to bag the points. A well worked move from the right by Umerah fell for Egan who looked to capitalise on Partington’s fumble. As he shaped to fire past Stryjek from eight yards, he was dragged back by Partington, who was red-carded for his troubles.

Penalty duties this time fell to Sutherland, who scored 11 kicks from 11 for Bromley last season. This time, his kick was low and direct but parried by Stryjek and although Sutherland and Payne got a second bite at the rebound, the ball was blocked and cleared.

After that drama, the final four minutes and five of added time saw Fleet attempt to reap their man advantage but nothing clear cut fell their way. Indeed when Cordner allowed Barnes through on goal the writing was on the wall, but the defender redeemed himself by chasing back and getting a challenge in, allowing Holmes to save.

Cordner was booked late on for a foul wide on the right that presented Eastleigh with a late opportunity but Fleet had stood up well to set pieces throughout the 90 minutes and this one couldn’t undo them in the 94th.

Ed Miller has been Ebbsfleet United's communications manager and programme editor since 2014 and responsible for the club website since 2007. Contact him on ed.miller@eufc.co.uk
PrevPreviousFestive dining at the Kuflink this Xmas
NextWatson deflated but hails Fleet’s progressNext