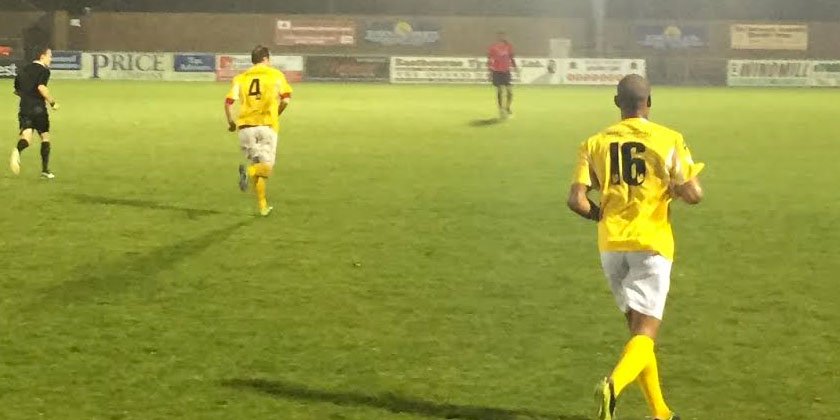 Fleet’s unbeaten record against Eastbourne Borough continued in dreadful weather conditions this afternoon, but more importantly they picked up a hard-earned three points to consolidate top spot in the Vanarama National League South.

Daryl McMahon made one change to the starting lineup, with Jordan Parkes returning in midfield and Danny Haynes dropping to the bench once more, while Michael West was back in the squad alongside Haynes. With rain teeming down solidly for much of the day, the Priory Lane pitch looked in remarkably good condition but even from kick-off, there were clear puddles forming in places and the ball either held up or skidded fast along an unpredictable surface.

And Fleet were almost undone by the pace of the ball straight from kick-off as former Dartford midfielder Nathan Collier fired over after Miguel Baptista had broken away down the right and delivered a great cross. Brandon Hall stood up well to Collier and Matt Fish got a foot in as Borough threatened to open the scoring.

After that scare, Fleet took the game to the hosts and three corners in succession almost yielded a goal when Parkes’ set-piece was cleared as far as John Paul Kissock who smashed a firm shot goalwards that was blocked in the six-yard box.

In the squally weather, the last thing anybody needed was defensive errors but one such mistake gave Fleet the chance to open the scoring on eight minutes. Ian Simpemba and Kiran Khinda-John suffered a lack of communication and as the latter dawdled on the edge of the box, Godden nipped in, dispossessed him but still had it all to do before laying a precise shot past Lewis Carey.

Godden and Danny Kedwell – who needed a head bandage applied for an injury – were full of running and giving the Eastbourne defence a torrid time. The visitors’ short, rapid passing game in the Borough half was quite something in the slippery conditions and the home side, trying to play against the wind, were struggling to clear their lines.

Another set piece on 15 minutes almost conjured up another goal for the Fleet as a free-kick was whipped in diagonally and Kedwell got a head to it, forcing Carey into a point-blank stop and Tom Bonner slid in for the rebound but it was scrambled away.

Former Fleet full-back Craig Stone had a rare chance for the home side but fired wide before Fleet roared back into action again. A decent low delivery from Stuart Lewis on the right wing sat up for the onrushing Jordan Parkes and he slid in, but could only launch the ball over the bar from close range, ending up in the net himself.

Fleet weren’t to be denied for long and they extended their lead in comical fashion. Sam Beale knocked the ball back to Carey; the pass didn’t seem to carry much pace but the goalkeeper took a swing at it, completely missed it and it just about had enough on it to roll over the line for 2-0.

The visitors kept up the pressure and Godden ran through on goal only to be felled by a challenge from Beale – there were shouts for a penalty but it looked like the Borough defender had taken a clean aim at the ball. Kenny Clark then headed over from close range and frenzied defending turned another in a succession of Fleet corners behind.

Former Fleet loanee Nathaniel Pinney could have done better on the stroke of half-time but Hall got down well once more to keep Fleet’s two-goal lead intact going into the break.

If McMahon’s side had played good football in the rain in the first-half, they could have been forgiven for merely tolerating the weather in the second. Conditions visibly worsened as the teams came back out and Fleet struggled to feed their forwards as high balls into the wind and rain simply blew back at them.

For a time, they still had the upper hand as Kedwell held the ball up and Lewis and Dean Rance plugged away behind him. But gradually, as it became clear the referee wasn’t in a mood to abandon it, the home side stepped up the pressure with the wind behind them. Simpemba headed a chance over the bar from an Eastbourne corner before McMahon sacrificed Kissock’s neat passing – which was becoming more and more difficult to perform in the puddles – for Haynes’ pace out wide.

Haynes almost carved out a chance within minutes of coming on, crossing low for Godden who was beaten to the ball by a sliding Marvin Hamilton who flashed it wide and out for a corner.

Eastbourne enjoyed plenty of possession but Fleet fans seemed more anxious about the chances of an abandonment than the likelihood of conceding two goals. Pinney did get the ball in the net after blocking Hall from a kick out and seeing the ricochet roll over the line but he was booked for the persistent infringement.

Only in the last 10 minutes did Fleet look unduly troubled. Baptista curled a shot wide from a good position and Simpemba saw another header sail too high. Hamilton caused a little grief with a powerful downward header that went just wide while at the other end, substitute West and Lewis almost broke the Borough back line but twice the ball got caught in water and the home side cleared.

Fleet looked home and dry (if such a thing were possible) when the referee signalled one minute of time added on but in that short period, Kane Haysman curled a delightful shot past Hall from 25 yards out to reduce the arrears. The referee’s extra minute seemed to at least double as Fleet fans briefly seemed worried but the visitors held on to record a memorable away win.

Ed Miller has been Ebbsfleet United's communications manager and programme editor since 2014 and responsible for the club website since 2007. Contact him on ed.miller@eufc.co.uk
PrevPreviousFleet look to dictate the pace
NextFleet to entertain Moles in TrophyNext