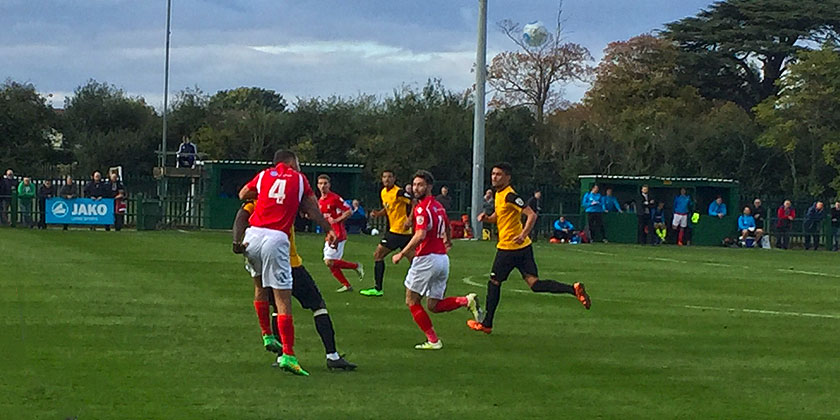 Fleet made it five games unbeaten in the league although saw an early strike cancelled out and had to settle for just a point in a hard-fought encounter in Essex. Coming off the back of a 5-1 home win last weekend, a useful East Thurrock United side made it difficult for the Fleet to move into higher gear and a point apiece was a fair reflection of the 90 minutes.

There was just one change for the visitors with Dean Rance replacing Jack Powell as he had for the second half at Merstham while Sean Shields returned on the bench. East Thurrock were able to name sharpshooter Sam Higgins on the bench after the striker had sat out much of the season with a hamstring injury.

The game was just six minutes old when Fleet burst into life. A ball from the right found Danny Kedwell and he showed some good footwork to get a cross away to the far post. In came Jack Connors and as he stuck a leg in ahead of full back Ryan Sammons the ball was knocked back into the box where Stuart Lewis reacted first to fire the ball into the space between goalkeeper Lidakevicius and the inside of the post.

It was a setback for the home side but they didn’t wilt and were dominant in the air, skipper Joe Ellul and frontman Kane Ferdinand getting off the ground to win the ball back at every opportunity. Right winger Reece Harris was a main cog in the home side’s gameplan and his crossing from the flank kept Dave Winfield and Mark Phillips busy. However, it was through the middle that Harris nearly opened the Fleet up, his run from deep only stopped by Ashmore’s low save, moments after an even better leap to deny James Walker’s goalbound (but ultimately offside) effort.

But 21 minutes in, the Rocks’ utilised their main assets to claim an equaliser. Harris delivered from out wide and the high ball was met by Ferdinand, his deft header landing wide of Ashmore and over the line.

Fleet had several chances to restore the lead. Kedwell’s ambitious 30-yard free-kick was on target but losing power by the time the goalkeeper scooped it up; Anthony Cook’s mazy run along the edge of the box was good, the drop of shoulder and curling shot even better as it crashed back off the post. Sam Deering’s quick thinking then handed Kedwell a chance inside the penalty area but the Fleet striker seemed caught in two minds and deposited his effort into the side netting.

The home side played some neat stuff at times, with good link-up between Teddy Nesbitt and Tom Wraight down the left while Harris continued to threaten on the opposite flank, another cross in the 41st minute requiring Phillips’ to head it behind for a corner with Walker breathing down his neck. There was a late flurry by the Fleet as Deering set Darren McQueen free but his shot was saved by Lidakevicius and though Kedwell and Cook were lurking, neither could get sight of goal.

Fleet kept the home side much quieter in a second half that was reminiscent of the final 45 minutes at Merstham – plenty of possession and territory but a lack of tangible chances.

Lewis had a shot deflected for a corner and Cook’s far-post cross into Kedwell briefly had the home defence cast asunder but Kedwell’s touch was heavy and a defender recovered to get in his way.  Just past the hour mark it was Cook again as he squirmed and shimmied on the penalty spot to try to get a clear sight of goal in a furious goalmouth scramble that ended with the winger sent tumbling but the referee either unsighted or unmoved as to Cook’s plight.

McQueen, who had been struggling for service, almost conjured something out of nothing when he was able to run clear from the left channel and drive at the defence but it was one of many efforts that was cleared for a corner.

The home side rarely threatened Ashmore’s goal and only Wraight’s dipping shot that was lashed over the bar on 68 minutes served as a warning. East Thurrock enjoyed a little more possession as the game ebbed away but did little with it. A couple of half-hearted penalty appeals from either side were waved away and a late Shields cameo did little to threaten the 1-1 scoreline.

Fleet return home next weekend and the one after that hoping their recent convincing Stonebridge Road form can yield a solid six points.

Ed Miller has been Ebbsfleet United's communications manager and programme editor since 2014 and responsible for the club website since 2007. Contact him on ed.miller@eufc.co.uk
PrevPreviousFleet determined not to get caught between Rocks and a hard place
NextSponsorship up for grabs for league-leaders clashNext