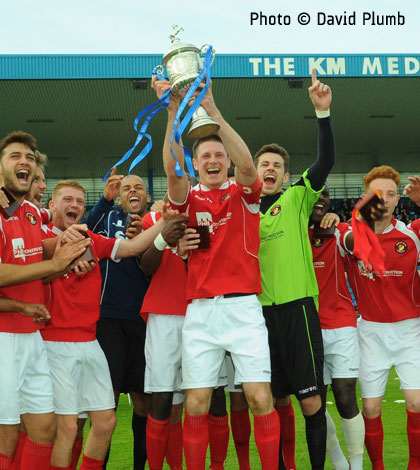 Steve Brown won it as a player, now it will be remembered as his first piece of silverware as a manager. The Fleet won the Kent Senior Cup in its historic 125th year to see their name engraved on the trophy for the eighth time, ending a six-year wait for success in the county cup.

As expected, there were myriad changes to both teams’ line-ups, though Fleet’s at least bore more than a resemblance to a first-team squad with only U16s captain Jack Barnes and Academy player Leo Mazzone the unknown quantities as they took their place on the bench. Dover had five players in their starting XI who had made Skrill South appearances this season but with Fleet lacking the academy players at their disposal, theirs was the much stronger side.

Yet it was Dover who charged into action quickest, Elliott Charles snapping at Aiden Palmer’s heels as Brandon Hall had to mop up the trouble with a decisive punch. But Fleet soon got into a rhythm that was to be expected given the sides out there, and the right wing was a constant source of supply as Chris Sessegnon, Alex Osborn and Michael Thalassitis gave Dover’s Ricky Gabriel a testing time.

Paul Lorraine headed a Daryl McMahon corner into Lee Hook’s arms on seven minutes and twice Stacy Long just failed to thread the ball through a packed penalty area as Fleet found Dover stubborn in the final third. At the other end, Charles almost forced an error from Hall as he charged down a clearance, but the Fleet keeper and Sessegnon mopped it up between them and then Thalassitis and Osborn both went close from the break upfield.

It was little surprise when Fleet did break the deadlock on 18 minutes. McMahon hit a corner to the far post where Thalassitis powered a header towards the goal and Sankofa helped it on into the net, though it looked destined for the top corner anyway.

Always a threat with his power and pace, Thalassitis then got behind Gabriel again and flashed a shot just past the base of the post. He was then almost on the end of Cook’s driven cross to the near post but Gabriel got back in the nick of time to clear behind.

The slender lead at half-time didn’t quite reflect Fleet’s superiority but they scored three fine goals in the second half to put a sheen on the scoreline – though Dover almost caught them unawares at the beginning of the second half when Joe Fisher should have done better than fire wide after capitalising on Sessegnon’s stumble.

But three minutes into the second period, Fleet made it two. Thalassitis ran at the defence and played the ball outside to Palmer racing forwards on the overlap. The Fleet full-back whipped a superb mid-height delivery into the box and Osborn flew in to direct a low header past Hook.

There were a few exchanges between the players when Fisher flew in on Lorraine, but the two later shook hands, though the Fleet skipper needed treatment. Cook then took centre stage, curling an excellent shot just over the bar before a run down the byline saw him deliver a cross that fell just behind Long. He then combined with McMahon for a sublime one-two that saw the Fleet No.4 fire a shot just past the post.

It was no surprise when Fleet made it 3-0 on 65 minutes, McMahon collecting the ball on the edge of the box and rifling home an excellent strike. That was all the signal Brown needed to protect his men for Saturday and Cook and McMahon made way, with Huke following them shortly afterwards, giving youth players Mazzone and Barnes their chance.

The substitutions slowed the game down, though Fleet still had their chances – notably a centre-back pairing when Lorraine teed up Sankofa inside the box but the shot was over Hook’s goal. Palmer fired over from a similar position after Long’s deft pass inside as Fleet sought a fourth.

And Hall will have been pleased with his superb stop on 85 minutes, a fine reaction tip over the bar from Michael Kamara in the six-yard box to keep another clean sheet for the Fleet.

With the final heading into time added on, there was a last moment to savour as Long’s persistence was rewarded with another great strike beyond Hook to repeat the scoreline on the last occasion these two sides met in a final. What the Fleet would give for it to happen the next time, too…

Ed Miller has been Ebbsfleet United's communications manager and programme editor since 2014 and responsible for the club website since 2007. Contact him on ed.miller@eufc.co.uk
PrevPreviousOne apiece in Kent showpiece
NextSilver lining to season’s endNext