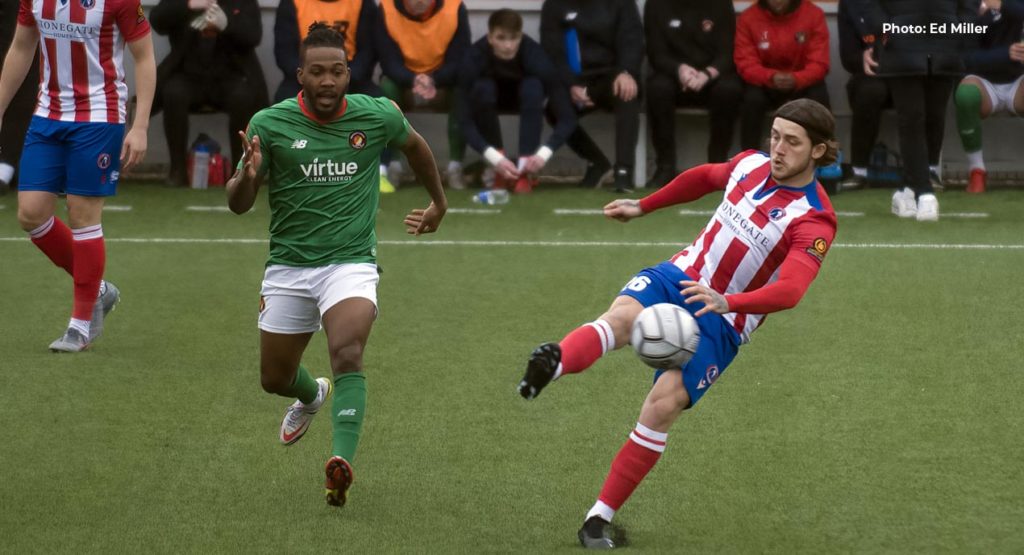 The league leaders took full advantage of their extra man for 73 minutes of this game following Sefa Kahraman’s red card as they netted four times in the second-half, Fleet ending the game with nine men as Rakish Bingham succumbed to an injury.

Added to Fleet’s personnel woes was the loss of both centre-halves as Sido Jombati also went off injured, necessitating a second tactical reshuffle against a side who were in no mood to go easy on their unfortunate visitors.

Three changes for the Fleet saw three front runners employed – Elliott Romain was one of them, while Alex Finney and the returning Sefa Kahraman also started; they replaced Ben Chapman, Greg Cundle and Christian N’Guessan.

For the home side, ex-Fleet wide man Bobby-Joe Taylor was on the bench and there were no places for either of Dorking’s other former Ebbsfleet faces Luke Moore and Kane Wills.

It was a high tempo start by both sides, clearly keen to disrupt the other’s rhythm and look for an early advantage. Matt Briggs made the first incursion with a cross that Kahraman cleared to Craig Tanner who exchanged quick passes with Romain that threatened to expose the Dorking defence.

The next chance four minutes in was even closer – Dominic Poleon battled into a shooting position that Barry Fuller had to hack away from the line and the former Gillingham full-back followed up to deny Alfie Egan’s follow-up as Fleet fans prepared to celebrate.

The Fleet would have fully justified an early lead as they came again on 13 minutes, Tanner and Poleon combining to supply Egan at close range but goalkeeper Dan Lincoln managed to gather and he then prevented Poleon’s next shot on target.

The wind was taken out of the Fleet sails on 17 minutes, however. Having brought down Wes Fogden early on in the game, the referee perhaps rather too keen to issue the first card of the game as soon as the first foul arrived, Kahraman stopped Briggs’ weaving run with another foul on the edge of the box. The referee was as eager with the second yellow as he was with the first and Kahraman was sent to the changing room.

Fleet survived the subsequent free-kick against the bar but it was clear that Dorking immediately had the upper hand as they were able to build patiently across the back with Fuller, Ed Harris and Darren Oldaker having time and space to stroke the ball from side to side and pick out Briggs hugging the right touchline, which pulled the green shirts from one side to the other in attempts to plug the gap.

Fleet dealt with that well in the initial stages, even forcing a free-kick on the edge of the Dorking box following a handball but Tanner sent that effort into the wall and then saw his second strike saved by Lincoln.

Dorking continued to press and Haigh pulled off a good save from point-blank range, while Fogden sent a powerful header arcing into the stand.

But it was Briggs who was the constant threat and after supplying the deliveries, his decision to go it alone on 33 minutes instead broke the deadlock. He advanced on Finney at speed, charging through into the box before slotting a low drive into the corner to give the home side the lead.

With Chris Solly having had to deploy into a more defensive position, Fleet’s tactical plans were dealt a further blow when Jombati went down injured and had to be replaced by Chapman. Haigh then managed to get a good hand on Niall McManus’ effort, superbly tipping that over the bar to keep his side in the hunt as the half-time whistle sounded.

With only the one goal to show for Dorking’s inevitable domination, Fleet began the second-half well having introduced Adam Mekki and reshuffling their pack again with Chapman, Solly and Tobi Adebayo-Rowling forming a back three. Tanner found Poleon within a minute of the restart and he spun his man to get through on goal. Lincoln blocked that and then managed to get in the way of Poleon’s follow-up as well.

But with Briggs and Nick Wheeler down the other flank continuing to torment, Dorking got the crucial second to put the task beyond their visitors. It came on 56 minutes, Briggs again involved with a run and shot that Haigh managed to keep out but the ball sat up for Fogden to turn over the line.

Dorking had a third goal disallowed for a push but duly chalked up number three moments later anyway, Fleet caught trying to move the ball upfield and Alfie Rutherford picked out that man Briggs who cracked his shot home from the edge of the box.

Dorking had fired eight past 10-man Havant in similar circumstances a few weeks ago and clearly had visions of doing it again as they made it 4-0 on 64 minutes, Briggs completing his hat-trick with another hefty hammer-blow that flew past Haigh and into the corner.

Fleet refused to let the home side add to their tally and enjoyed a spell of pressure at the other end, Mekki twice winning free-kicks right on the edge of the box. From the second of these, Lee Martin’s pass was headed on by Mekki and looped over Lincoln for a consolation goal.

With Bingham a willing but unable passenger in the final minutes due to a knock, he finally succumbed as he chased a ball out wide and couldn’t continue, reducing Fleet even further to nine men.

With the game long gone as a contest, Dorking were thus able to add a fifth with time running out. Taylor was crowded out from adding a goal against his old club but Rutherford was then able to dig the ball clear just in front of the penalty spot and deposit his shot to make it 5-1.

Ed Miller has been Ebbsfleet United's communications manager and programme editor since 2014 and responsible for the club website since 2007. Contact him on ed.miller@eufc.co.uk
PrevPreviousPreview: Meadowbank meeting for top two
NextKent derby the focus for Fleet after Dorking defeatNext