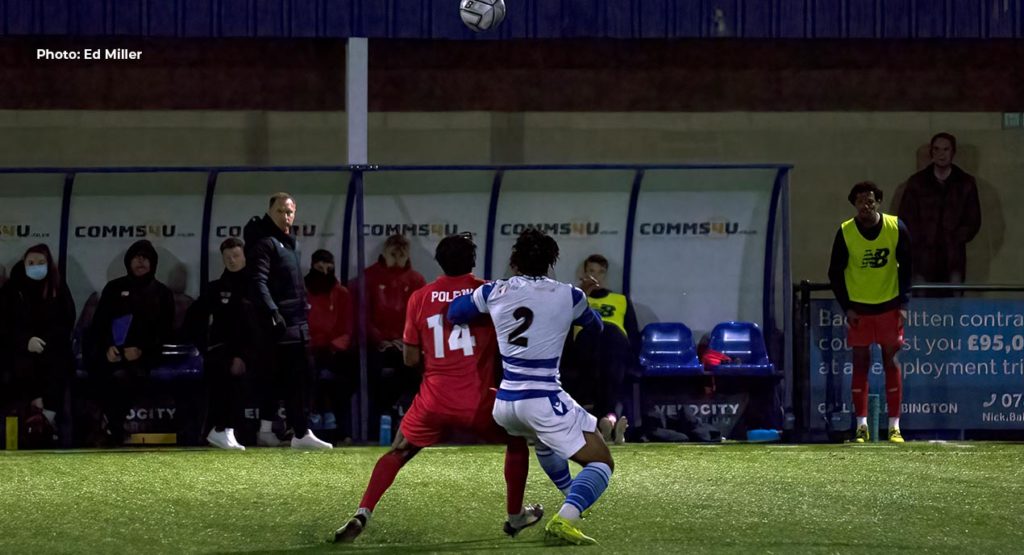 Dominance in defeat for Fleet

You can’t win them all is a familiar football adage – but sometimes it’s difficult to fathom how you don’t win some of them when you do everything the Fleet did last night.

And that was Dennis Kutrieb’s takeaway from a dominant display at Oxford City on Tuesday night, with the Fleet manager pleased with his side’s effort and performance while acknowledging that the home side’s goal was the statistic he’d rather have taken home.

“I’m really frustrated, I think we were on top of them over 90 minutes,” he said after the final whistle. “I don’t know how many shots on target we had and they had but as I’ve said so many times in football… if you don’t score you can’t win games. That’s one of the simple things. My boys put so much effort and real desire in and I was happy because this is a top team here. They did a good job, they didn’t concede against us but of course we were very unlucky, the post, crossbar – I don’t know if it was behind [the line] or not. So many chances.

“It was a very dominant second half, and even first half was very good. Every defeat hurts a lot but this one even more because the boys deserve more if you fight so hard, if you’re on top. I’m excited for the stats, when I see how many kilometers all the boys were running and all these things but it’s a 1-0 defeat and the boys are very down now in the changing room because they know they deserved more. But you don’t always get what you deserve, you need to work harder and you need to go again and again and then you will win your games.”

There were a fair few talking points aside from the superb strike for the winner and the visitors’ subsequent dominance, with an offside goal for Dominic Poleon, the sending-off of Tobi Adebayo-Rowling and a potential penalty – and Kutrieb found those frustrating as well.

“I don’t want to talk about it,” he said of those incidents. “I saw so many things where I could talk about, a clear penalty where [Dominic Poleon] can score a goal in the second-half but with both arms he’s pulled down. The referee couldn’t see it or didn’t want to see it but we don’t want to blame the referee for today. We need to put the ball in the back of the net if we want to win the game. We didn’t do it.

“I couldn’t see [the sending-off]. It was far on the other side, the linesman was very close so if he’s so close he should be right. But anyway the red card was not a problem because even the last 10 minutes with 10 men we were dominating the game. I can’t pass the blame to the boys because I couldn’t say they didn’t do enough or they didn’t work hard enough. They did everything right the gameplan was good, we got enough chances and we were in and around the box but at the end of the day, it’s 1-0.”

It’s been a run of tough games as expected for the Fleet, with Dulwich Hamlet to come on Saturday and Kutrieb has some of his injured players back in training.

“[Some] of them are in training so we need to manage all the things and then we need to make decisions who’s the right player for the right pitch and for the right opponent,” he explained. “Because on a 3G pitch, after a long injury it’s not a good start for you so you need to be careful with all the boys. You can see when you have a tough period like we have at the moment, with six, seven, eight games in a short period you need to make sure you don’t have too many injuries. At the moment we suffer like everyone else and we need to make sure we get as many as possible back for the next games.

“You can always talk about games in hand but you need to win them and we knew before that these three or four weeks are going to be very very tough and they’re still not over. We have another tough game on Saturday; Dulwich are a top team this year and they have a few very dangerous players. With a little bit more luck, because I think we definitely deserved more today, I think we will get what we deserve but not in every game, so we need to put the same efforts in on Saturday.

“[Dulwich] play against Havant [on Wednesday] so at least they play a midweek game as well. But it’s tough for everyone who plays two, three, four games in one or two weeks because to recover is tough. Even the Premier League clubs are always talking and moaning about it so of course it’s the same situation for us. But we need to get the defeat off our shoulders and with the same efforts and the same courage and everything we showed today, then it’s going to be another tough game.”

Ed Miller has been Ebbsfleet United's communications manager and programme editor since 2014 and responsible for the club website since 2007. Contact him on ed.miller@eufc.co.uk
PrevPreviousOxford City 1-0 Fleet
NextDulwich Hamlet 5-2 FleetNext