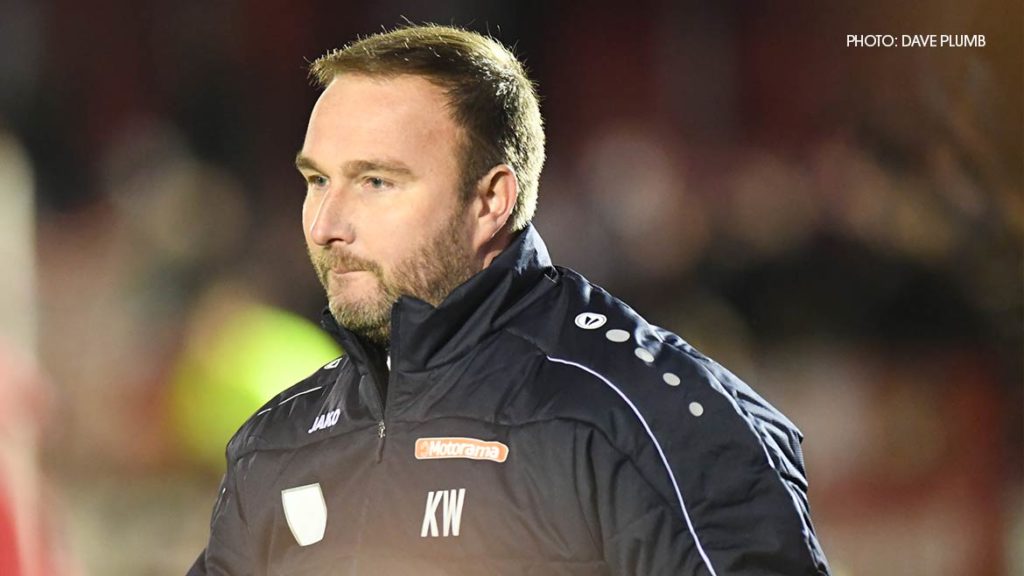 Diligence and discipline wins the day

Kevin Watson praised his players for getting all the things they’d worked on during the week absolutely spot on in this afternoon’s tough victory over King’s Lynn Town.

Used to scoring, unused to losing and with a man advantage for 70 minutes of the game, King’s Lynn might have expected to go to town on a Fleet side still reeling from a 10-man, seven-goal horror show at Barrow but Watson’s boys were having none of it.

“We defended well,” he told BBBC Radio Kent’s Matt Cole. “We’ve done a lot of work with the back four this week, closing gaps, watching runners from midfield, being strong, being diligent and I thought they carried it out to the letter.

Gregory was one of two debutants, with Jermaine McGlashan the other, and both men earned praise from their boss.

“Gregs was a calming influence as well behind our back four,” Watson said. “I could hear voices out there organising which has not been a strong point of ours and a willingness to hang on and win the game. And that was really pleasing.

“I thought Jermaine McGlashan had an absolutely outstanding debut today and I’ve told him so. What he did give us was a little bit different from what we’ve had. I asked him to stretch the pitch early, run behind their back four and that will enable Payney to get on the ball and give us a little bit of space. And we started alright, we had the ball, we got it wide and the sending-off did disrupt us and you’re thinking here we go again. “

The sending-off was a controversial moment, involving as it did Ryan Jarvis appear to make contact with Josh Payne’s head and Watson wasn’t pleased with the outcome.

“We’ll have to have a look at it,” he said. “I have my thoughts on what happened. For me just raising your arms to brush off someone’s hand who’s grabbed hold of you shouldn’t be a sending-off. And also treading on someone’s face should be. But we hung in there, we kept our shape and didn’t chase it and I said to the boys at half-time that they can have all the ball they want in front of you, when they start playing through the midfield and get through little gaps, that’s when we’ll nick it.”

The spirit of the win was just what Watson had wanted to see after Barrow in a real team effort.

“Josh Umerah will chase anything, a real honest boy,” said Watson. “They’re all honest boys whether we’re good, bad or indifferent, I can’t have asked for much more off those lads since I came in. He would have been disappointed to come off on 72 minutes but he’d done his job so Tomi can have a run at them, which he did, run us up the pitch, got hold of the ball. I’m really proud of what they produced today. Not many people with the players we have out would have expected us to get a result.

“And I’m delighted off the back of last week. Including myself we were all very disappointed with our performances, you always look back and think you could have done something different. Admittedly against an excellent Barrow side and we went down to 10. But for me today, going down to 10 men again, playing against a team that’s won 11 out of 13 in their division, at the top of the division, I said to our boys: we won’t think it in here, there’ll be a lot of people in this ground today and around the country who follow the FA Trophy that will believe King’s Lynn are favourites for this game.”

But it’s the Fleet who progress and Watson dismissed talk of taking the competition anything less than seriously.

“I’ve heard many times, it’s a break from the league, a free hit,” said the manager. “No, there’s no free hit, it’s the FA Trophy of which you’re now in the last 16 and I said to my players do you not want a day out at Wembley? Because I certainly do. I want to go to Wembley, or at least get as far as we can in this competition.”

Ed Miller has been Ebbsfleet United's communications manager and programme editor since 2014 and responsible for the club website since 2007. Contact him on ed.miller@eufc.co.uk
PrevPreviousFleet 1-0 King’s Lynn Town
NextFans were outstanding again, says WatsonNext