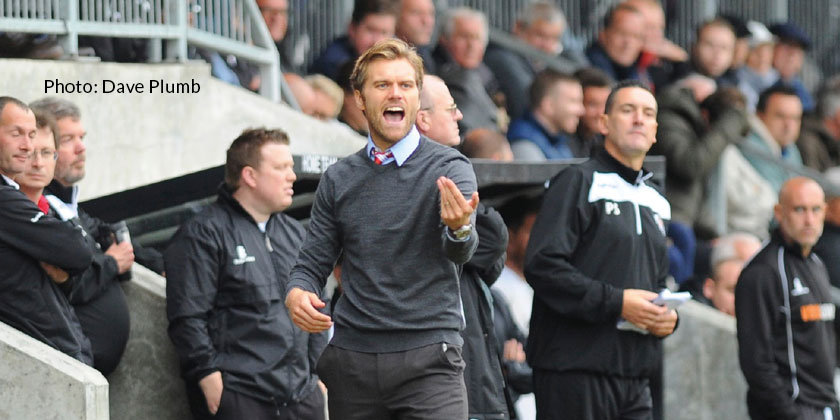 Shopping days until Christmas may be marked on many household calendars but Fleet fans have been mentally ticking off the days until the first of two north Kent derbies gets under way, with the visit to Princes Park set for 3.00pm on Boxing Day.

As ever, the fixture is a mouth-watering one and even with nothing riding on it provides plenty of talking points. This year, however, there is plenty riding on it. With Fleet third Dartford fifth and just four points separating the sides (potentially one if the Darts win their game in hand), the two rivals couldn’t be much closer.

Daryl McMahon heads into a festive period that is essentially a normal league programme with just two games across two weekends and is spoiled for choice selection-wise. “Every single player – other than Aaron McLean’s long-term injury – is fit and available,” he told FleetOnline.

As such, will the Fleet boss be tempted to set up differently for the home and away matches? “We’ll approach both matches to win both regardless of home advantage or playing away,” McMahon said, “and I’m sure Dartford will do the same. As to formation, we’ll see on each day. They will be two games we’ll look to win like any other game though of course being the derby, the feelgood factor if you do is that much greater. They’ll be tense and close, typical derby games, but we’ve got to match the physicality and the intensity of the occasion while being emotionally unattached and play our football. What we are good at it is getting the ball down and playing with composure – but it’s doing that in the heat of battle that’s important.”

Dartford are able to welcome former Fleet skipper Tom Bonner back from suspension but have lost full-back Tom Wynter in the process, the former Dover defender’s red card last week at Maidenhead resulting in the standard three-match ban. The Darts have worked with a fairly small squad much of the season and manager Tony Burman doesn’t have much room for manouevre to change things about but his side have earned consistent results so far in 2016/17 and proven hard to beat, with only four defeats all season and only two since early September.

Coming off the back of the 5-0 thrashing at league leaders Maidenhead last weekend, Burman will no doubt be looking for his side to bounce back in the ideal manner – and two victories, or at the least an unbeaten two weeks, against the Fleet would be a perfect tonic. Three of Dartford’s four defeats this season have come against the leading sides (Maidenhead, St Albans and Hampton & Richmond Borough) so that’s another statistic they’d like to put to bed at Princes Park and Stonebridge Road in coming fixtures.

Led by skipper Elliot Bradbrook who once again is the club’s leading goalscorer in all competitions, Dartford can also call on the goalscoring talents of Andy Pugh and summer signing Duane Ofori-Acheampong. The former Dover striker is a handful and awkward to play against, a trait that has worried Fleet defences in past seasons, but McMahon is confident his defence – with the second best record in the division – are up to the task. “He’ll be a handful,” the boss admitted, “but nothing we haven’t faced before. “Yes, he’s awkward, and Dartford have plenty of other good players and are in a good league position. But my defenders shouldn’t be worried who they face, they’ve been outstanding  in recent weeks and if they do their jobs are a match for anyone.”

Dartford, too, have an impressive defensive record with just 20 goals conceded (and five of those last week alone), but it’s up front where their fans would like to see more application with 29 goals scored the lowest among the clubs in the top half of the table. But in a derby match where single goals often decide the outcome, that might not prove to be such a noteworthy statistic.

Fleet won the corresponding fixture last season, played in August, by a single goal courtesy of Jordan Parkes to land a first league win in Dartford since 1983. But you have to go back to our Southern League-winning season of 1957/58 to find the last time we won a Boxing Day fixture in the neighbouring borough. Indeed our last three Boxing Day games in Dartford haven’t made for pleasant reading, with 3-1, 5-0 and 4-1 results in Dartford’s favour.

Both sides are still waiting for the win that would take them ahead in the north Kent derby sequence with 51 victories apiece and 25 draws the head-to-head record.

Ed Miller has been Ebbsfleet United's communications manager and programme editor since 2014 and responsible for the club website since 2007. Contact him on ed.miller@eufc.co.uk
PrevPreviousMerry Christmas one and all Fleet fans!
NextDartford 2-1 FleetNext