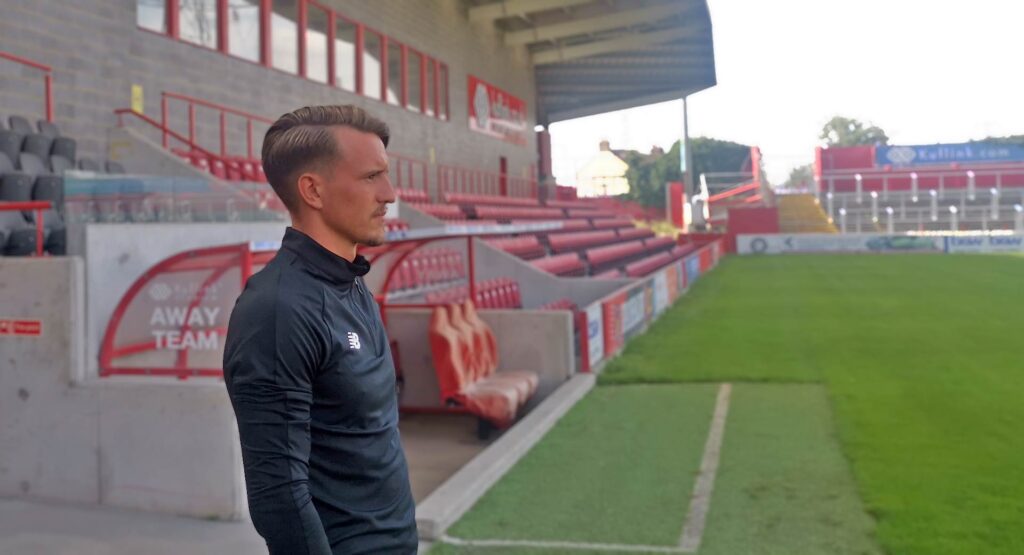 Derby days ahead for the latest local boy

He’s played for Gillingham, was man of the match in their Kent Senior Cup semi-final at Maidstone and Aylesford boy Ben Chapman is savouring the many local derbies ahead in the National South.

The nearest the former Dulwich Hamlet midfielder got to a local derby last season was probably against Welling United but now he has potential games against Dartford (play-offs permitting!), Maidstone United and Tonbridge Angels to look forward to.

“There’s some big clubs in this division,” Chapman said. “We were watched by 2,000 regularly at Dulwich, you’ve got Maidstone, a few local teams for big derbies like Dartford maybe. Those will be big crowds, either here or at their place, so those will be good games to look forward to and with the standard at this level, attractive football too.

“I like to stay local if I can play for a local team and obviously Ebbsfleet is that to me so these derbies will definitely be ones to look forward to.”

Chapman has been on director of football Steve Lovell’s radar for a while, having been handed his Gillingham debut by the former Gills boss in 2017.

“Steve’s kept in contact and he came back to me when last season stopped about the opportunity,” Chapman said. “Ebbsfleet’s a local club to me, it’s a big club and the setup here is somewhere I can develop.

“It was the offer that had everything to make me want to make the move and it is a club you gravitate towards when the interest is there. Looking ahead to this season and where I am in my career, it was the best club for me. I’ve played here a few times and it’ll be nice to come back and do so as a home player.”

Chapman is another signing with experience of last season’s National South, though the midfielder could have stayed in League One having been offered a contract extension by Gillingham last summer. But the 21-year-old opted to play more regularly at a lower level for the experience.

“I decided not to sign at Priestfield again in the end,” he explained. “I thought I’d drop a couple of leagues and get some men’s football and regular game time. It’s hard for you to play proper football in the U23s and it’s hard to break into first teams where you’re playing a few games here and there and then back to the 23s. I enjoyed a loan at Faversham, it was a good club and I learned a lot from that before going back to Gills.

“So dropping down with Dulwich, it was still that same kind of standard of football I’d been used to but you get that physicality and you get to play that way yourself. Lots of players have done it that way, make their way lower down and bounce back up the leagues.

“The National South was a little more physical than I thought it was going to be at the start but it didn’t faze me. I worked at it, it was a good standard and I really enjoyed the first season I had and I’m looking now to develop that and push Ebbsfleet on.”

Chapman’s an energetic, busy midfielder but – like previous signing, Tobi Adebayo-Rowling – he’ll not necessarily be pinned down to one berth in the side such is his adaptability.

“Dennis has explained to me how he wants me to play and what he sees for me,” said Chapman. “Obviously things change during a season, you might start somewhere and then fit somewhere else in a team that suits better, in a different position you didn’t expect at the outset. But we have pre-season and we’ll all know exactly our jobs come the first day of the season.

“I played right-back at Dulwich as well as midfield. I’m very diverse in that I can play anywhere I’m put really. But my fundamental strengths are that I work hard, really hard, constantly. Everyone can have a bad game, but the minimum you should be doing every 90 minutes is working 100% no matter what. I think fans appreciate that, they can see that and they can see if you’re doing OK but not putting 100% effort in.

“I’m two-footed and box-to-box. I’ve got a good gas tank and go until that final whistle… plus with the different roles, I use that to benefit the team as a whole.

“Promotion’s my goal. I can’t say anymore than that really. A team that drops down, the best thing they can do is bounce straight back up and you get that feeling from the management, the staff and the players we’re bringing in.”

Ed Miller has been Ebbsfleet United's communications manager and programme editor since 2014 and responsible for the club website since 2007. Contact him on ed.miller@eufc.co.uk
PrevPreviousChapman the next man in Fleet’s plan
NextMatch Rewind v Notts County, 2003Next