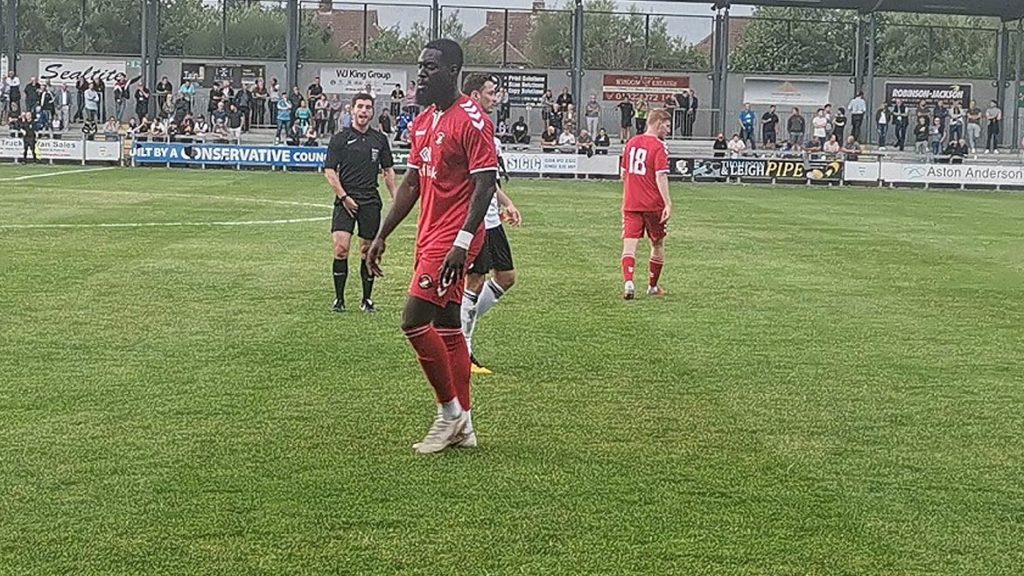 Youth player Tahjae Anderson netted his second goal in as many games as Fleet came from behind to draw with Dartford at Princes Park.

In the second pre-season friendly of the summer, Fleet began with much the same side as at K Sports, with the exception of Alfie Egan (late of AFC Wimbledon) replacing the on-trial striker who had begun Saturday’s match.

That left Gozie Ugwu ploughing something of a lone furrow up front, although it was Dartford who enjoyed most of the offensive play in the first half.

Former Fleet favourite Darren McQueen could have scored inside two minutes when his pace took him clear of the Fleet defence and he attempted to roll the ball aside of Ashmore who got a touch to send it behind.

Ashmore, a spectator last Saturday, was a busy man and he had to tip Ryan Hayes’ hanging cross clear of the far upright on 11 minutes. The Fleet goalkeeper then got another touch to a rising Charlie Sheringham shot and a little later in the game produced a fine reaction save after Luke Allen smashed a shot goalwards.

Ashmore then saved from McQueen with his legs to force another Darts corner but from that, on 35 minutes, came the opening goal. New Darts signing Josh Hill rose highest and planted a firm header finally out of Ashmore’s reach.

It was a lead that Dartford deserved, with Fleet’s passing through midfield at times very pleasing on the eye but failing to force Mark Smith into a save.

Aswad Thomas got free on a couple of occasions to whip in a couple of low crosses and Alex Lawless was busy snapping at heels in midfield, but it was the Fleet back line who saw most of the ball. Sean Shields got the only shot on target but without power it didn’t test Smith.

Fleet were fortunate to head in at the break only a goal behind after Ashmore advanced out of his box and saw his clearance blocked by McQueen, rolling slowly towards the goal and then divert just wide.

Rather than lose their way as substitutions rained down in the second half, Fleet looked brighter, with Dartford less adventurous than in the first period. But for McQueen’s busy pressing in and around the box on the hour mark, Fleet looked more likely to score.

And they broke the deadlock via a combination of persistence and good fortune 20 minutes from time. The bustling figure of substitute Anderson had already unsettled the Darts back line and when the Academy player put pressure on two home defenders with goalkeeper Smith advancing, the Fleet frontman intercepted and watched the ball roll towards and over the goalline.

Fleet’s Academy substitutes acquitted themselves well in the closing stages and Zach Dainkeh showed brightness and anticipation to attack a ball on the edge of the box and curl a decent shot on target at Smith.

Jamie Grimes connected well with a diving header to send a corner thundering just wide while at the other end Ashmore’s replacement had to get down well to efforts from Ben Greenhalgh and Jedd Smith.

Ed Miller has been Ebbsfleet United's communications manager and programme editor since 2014 and responsible for the club website since 2007. Contact him on ed.miller@eufc.co.uk
PrevPreviousDarts next up in summer schedule
NextEx-Dons midfielder on Fleet trialNext