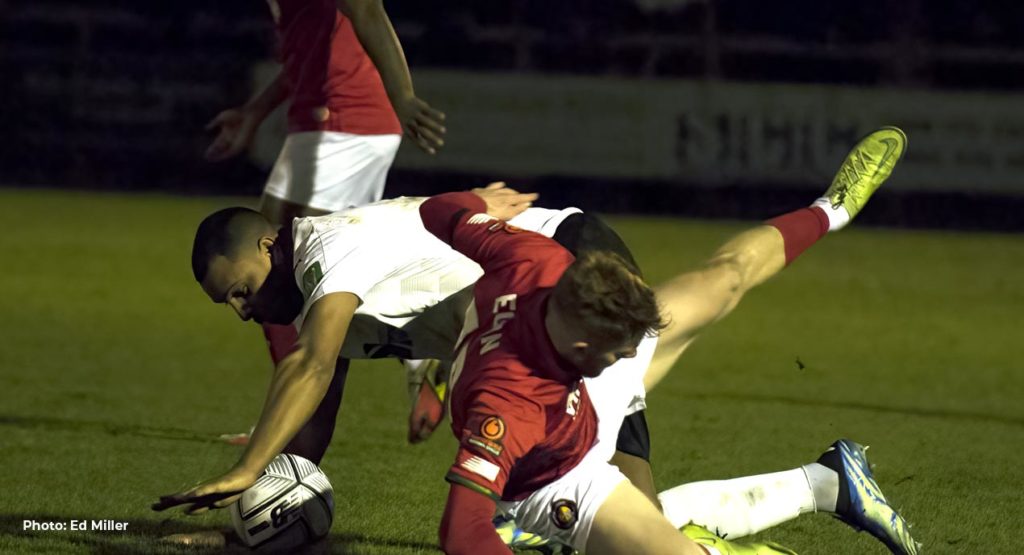 A single goal decided the North Kent derby for the third game in succession, but this time it went Dartford’s way as Jake Robinson’s first-half conversion took the points.

Fleet can count themselves unlucky, however, after being reduced to playing with 10 men for the last quarter of an hour due to Joe Martin’s injury and having made all three substitutions. The visitors got off to a slow start but were the better side in the second half, even after going down a man, and should have converted at least one of several chances – but as it was Dartford prevailed, having taken theirs.

The game had arrived that bit too early for Louie Moulden to make the squad after arriving from Wolves but there were two other changes as Craig Tanner and Lee Martin earned starting places, with Kieran Monlouis and Will Wood settling for a place on the bench.

Dartford pulled a surprise, introducing theIr new striker, Gravesend-born Marcus Dinanga on the teamsheet, one of seven changes from their defeat at the Kuflink Stadium.

Dartford kept the ball well in the opening exchanges and Fleet were chasing it for much of the opening 10 minutes. For all their possession, however, only Kory Roberts registered a shot of any note for the hosts after a first-minute free-kick made its way through to the Bromley loanee.

A better opportunity presented itself on 14 minutes when Jake Robinson gobbled up a loose ball in midfield and slid a pass out to Dinanga who forced a low save at his near post from Chris Haigh.

Fleet’s first real attacking move came on the counter on 17 minutes, Tanner spreading play wide to Lee Martin. He found Greg Cundle whose low delivery was met by Elliott Romain but bounced off his heel and away. Tanner and Martin were at it again two minutes later, the skipper getting a shot away from the edge of the box that Dan Wilks stopped.

But Dartford were ahead on 21 minutes when Fleet lost the ball in midfield and a quick break down the left sent a searching cross from Kai Innocent over to Robinson. He got a leg on it, Haigh made a good save but Robinson managed to connect again, the ball coming off the post and then having enough on it to make it over the line.

Fleet tried to respond when Tobi Adebayo-Rowling made a forceful run to supply Tanner and Alfie Egan ended up curling a promising effort into Wilks’ arms. At the other end, Robinson should have made it 2-0 on 26 minutes when Danny Leonard sprung down the flank on the break, crossing to the goalscorer who pulled a shot wide with only Haigh to beat. But having seen that opportunity go begging, the Darts were thereafter more content to stop Fleet finding any way through.

Egan’s clever run into the box on the half-hour almost carved out the equaliser as he whipped an excellent ball across goal and Romain was only inches from connecting. Romain continued to find himself in good positions but not quite able to connect each time and when Lee Martin hooked in a high ball on 37 minutes, again Romain was there but the ball bounced through to Wilks.

Cundle went even closer on 39 minutes, Tanner inching forward and the Fleet No.15 getting a shot out from under his feet that was hoisted away from the six-yard box. From the resulting corner, N’Guessan’s header caught Wilks out but Lee Martin fired over the bar.

There was a let-off for Fleet just before half-time when Keiran Murtagh was in acres of space to find Dinanga but the new boy slipped in the box. He recovered to get a shot on target but the stumble had taken any real power out of it.

Dominic Poleon replaced Romain for the second half and announced his presence with a rampaging run through the Darts defence straight from kick-off But he went down in the box as the last man did his job for the home side. Fleet had another sight of goal two minutes in, Tanner’s incisive pass finding Lee Martin in a great position but the skipper slid on the surface as he shaped to shoot.

Another superb chance presented itself on 50 minutes, Adebayo-Rowling’s pace taking him all the way down the right and his excellent cross on towards Poleon’s head flew towards the bottom corner but skipped wide. It was Fleet’s best spell of the game and the tireless Ben Chapman was next to create a gap, racing through the middle and meeting a pass back into the box but a last-ditch tackle at his feet saved Dartford.

Dartford got lucky again on 66 minutes when Lee Martin’s shot from distance deflected off Roberts’ head for a corner and then Poleon’s kick in the middle of a scramble in the box hit a wall of white shirts. It was nearly all one-way traffic and Poleon lifted the ball over Wilks and hooked an effort just past the angle of the goal as lax Dartford defending allowed him to nip in to exploit.

With Joe Martin limping from a tackle after Fleet had made all three substitutions, Dartford began to fancy their chances for a second goal. Christian N’Guessan and Solly both had to clear from inside their own box as Leonard looked to make the most of Martin’s discomfort. The left-back was clearly struggling when he was yellow-carded on 78 minutes and limped off to leave luckless Fleet with 10 men.

Still the visitors strove for an equaliser. Chapman’s run to the byline was cut back to the waiting Monlouis 12 yards out but he was chased down. With Lee Martin filling in at left-back, the sheer effort by the Fleet couldn’t be faulted as Dartford failed to make the most of their extra man.

Six minutes of added time left Dartford boss Steve King an animated figure in his technical area but Fleet’s efforts were in vain as they couldn’t create a telling final chance in that period and the Darts secured revenge for their New Year defeat.

Ed Miller has been Ebbsfleet United's communications manager and programme editor since 2014 and responsible for the club website since 2007. Contact him on ed.miller@eufc.co.uk
PrevPreviousPreview: a February first for North Kent foes
Next“You can’t be so wasteful with chances,” says Fleet bossNext